Thomas Middleditch, Sean Giambrone, and Mary Mack mix heartfelt emotion and unapologetic raunch in their characters, Terry, Yumyulack, and Jesse, as they deal with their manic team leader Korvo, voiced by Justin Roiland, on his and Mike McMahan’s wickedly funny animated series; the new season debuts tomorrow, July 13, on Hulu. 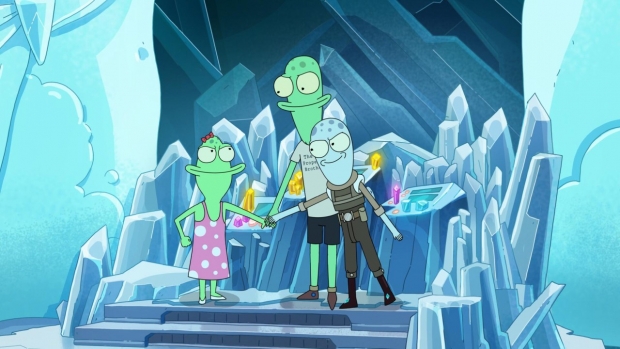 For the first time since Solar Opposite’s Season 1 premiere, Shlorpian family team leader Korvo is setting aside his urgent ambitions to fix their crashed spaceship and, instead, is now taking time to settle into the suburban family dynamic – along with Terry, Yumyulack, and Jesse - they’ve been forced to embrace that he’s actively avoided for two seasons.

In Season 3 of Justin Roiland’s and Mike McMahan’s 2D animated comedy series, Yumyulack is still adding shrunken humans to the lawless, ant-farm-like society created in his bedroom wall, Terry and Korvo are still exercising their deep desire for personal justice by launching humans into space, the group’s young Pupa is still terrorizing the neighborhood, and Jesse is exercising her independence with a Seven-Minutes-in-Heaven session with boy band “BTK.” But amidst the insanity, this group of aliens is also discovering their groove as a family rather than just a group of, in Korvo’s words, “beautiful strangers,” on a sci-fi mission.

Take a couple minutes to enjoy the trailer:

“It has that identifiable family unit that we’ve all seen before and that brings you in, but then you quickly realize from the get-go that it's also a freight train of absurdity and social commentary,” says Thomas Middleditch, who voices for character Terry and is known for starring in TV series like Death Hacks and Silicon Valley. “I also think it takes time to slow down the pace every now and then. I mean, that's kind of what ‘The Wall’ content is in its entirety. It’s like, ‘Now, for no reason, we're going to tell you a high-stakes adventure movie plot with people trying to survive.’ All that stuff combined just makes the series really, really fun.”

One of the exciting developments in Season 3 is that the humans who have been trapped inside Yumyulack’s wall for two seasons finally make moves to escape and Korvo – voiced by show co-creator Roiland – discovers Yumyulack’s antics with the shrink ray, acting like a father who has discovered his son has been sneaking into the liquor cabinet for two years.

“The creators really utilize that unlimited possibility to the nth degree,” says Sean Giambrone, the voice of Yumyulack, also known for voicing Benny on The Loud House. “It’s always such a surprise to see what they end up coming up with. It’s a really fun thing to read as a script and then watch afterward.” According to Golan the Insatiable’s Mary Mack, who voices Solar Opposites’ Jesse, so much of the show’s success comes from not only the creativity of its creators, but also the animation – produced by 20th Television Animation – that fosters a world of limitless possibility.

“It’s just fun to be in an animation and not have limits on what can happen,” says Mack. “We each have our own course we're on as characters this season. And then we have our family unit track. I like watching them figure things out and then come together as a family. That’s the fun part of most animation, but especially this animation. The opportunities are endless for shenanigans.”

Middleditch adds, “Animation is really only constrained by the imagination and the ability to draw it. No one has to go build a set, or make all these costumes, or hire all these background extras, or come up with special effects for the lasers. You just draw it and then it's real. So, as a result, you get to take super hard left turns. You can be in space and then underground in one episode. It creates a ton of freedom.”

But it’s not all about the wild rides. As both Mack and Middleditch point out, Solar Opposites’ strength is its ability to put a crew of aliens up against very human struggles and triumphs. Roiland and McMahan’s other animated series, Rick and Morty, is similar to Solar Opposites in its unapologetic humor, raunchy quips and surprisingly touching, family-focused foundation. It’s a combination the two creators seem to specialize in, with McMahan also serving as writer and producer on Star Trek: Lower Decks.

“Conversely, if it was just chaos without any of like the heart that deepens it, that would feel a little bit exhausting,” notes Middleditch. “So, partly what I think the show does really well, is it gets a mix of that in most episodes.” The series, which often reflects on the beauty of humanity within the pollution, crass consumerism, and frailty of life on earth, has even caused its actors, like Giambrone, to experience moments of self-reflection as they play these extreme but still relatable characters.

“When Yumyulack feels something, he does something pretty big or crazy about it,” says Giambrone. “And playing him, I’ve learned that, when I have a feeling like Yumyulack, to seek support from a person like Jesse. I think it became more evident by watching our show, but good conversation stuff happens between all the Solars. It’s a good lesson on how to talk to each other.”

Mack concurs, noting “I think everybody can learn a lesson from Yumyulack about stopping and counting to 10 and taking a breath before you do anything.”

Giambrone, Mack, and Middleditch all agree that the show’s emotion can catch people by surprise. A viewer can be caught up in the humor, and then suddenly, be thrown into this very meaningful moment. But, because it’s something unexpected, those moments lend an opportunity for more impact than what the shows appears capable of on the surface. “Something weird and powerful about animation is that you can end up experiencing the same tear-jerker feeling of a Pixar movie in a show like this,” notes Giambrone.

Middleditch adds, “The show does have, especially in Season 3, a lot of tender moments. There’s chaos, chaos, and more chaos, and then everybody ends in a group hug. And it's sweet. There have been a few times where I've gone into the booth to start recording a session and I just say to the booth technician, the directors, and the producers, ‘I love the show. Thank you, guys. I appreciate so much being able to do this.’”