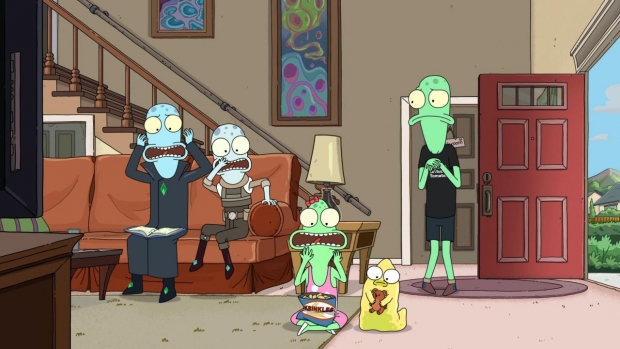 Hulu has just shared with AWN an exclusive featurette, Solar Opposites – The Lost Recording, a long-lost video that provides an intimate portrait of the hit show’s cast as they record, and oddly ad-lib, together in studio.  Burning questions about the show, including the origin of “sexually hard sexy fun-buckets,” and “baby biscuits,” are now revealed. Check out the never-before-seen-footage of stars Justin Roiland, Thomas Middleditch, Sean Giambrone and Mary Mack.

Solar Opposites, from 20th Century Fox Television, has become a significant hit for Hulu; the show was picked up for a third 12-episode season. The 2D animated series was originally greenlit with a two-season order. Its May 8 debut was Hulu’s most-watched original comedy premiere to date and was Certified Fresh by Rotten Tomatoes. The show is co-created by Justin Roiland and Mike McMahan, who also serve as writers and executive producers; Josh Bycel executive produces as well. Justin Roiland, Thomas Middleditch, Sean Giambrone and Mary Mack will reprise their roles.