The Surreal, Stop-Motion World of ‘The House,’ Part 3

In the third and final linked article, director Paloma Baeza discusses how her acting career and being a cat lover helped in creating her apocalyptic story for Nexus Studios’ animated anthology, now streaming on Netflix. 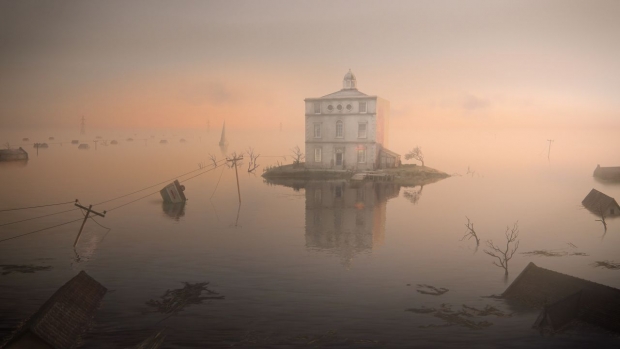 In The House, now streaming on Netflix, Nexus Studios has brought together four of the leading voices in independent stop-motion animation to create a dark comedy comprising three surreal tales about a mysterious residence and the individuals who make it their home.

In the third of three interviews, we spoke with director Paloma Baeza about her move from acting to directing, the admirable attributes of felines, and the beauty of chaos.

AWN: You started as an actor before moving to directing. What has that provided you as a filmmaker?

Paloma Baeza: I feel very lucky and privileged to have gone on this journey, which has been an odd journey through different areas of the industry, but all completely connected. It's all storytelling, ultimately. Having acted and been on the other side of the camera means you know what it's like. You know the difficulties and the challenges. And you know how to talk to actors because you were one, so you don't have any fear about exploring and finding a performance. And that translates directly to stop motion because it's the closest to live action.

You still have a set, and it functions the same as a live-action set – it's just that you have animators instead of actors. Your animators become your actors. You talk to them about how you are going to make a puppet move in a particular way, you plan your movement. And in terms of technical filmmaking and cinematography, acting was my learning ground because for the many years I was on the other side, I was always watching what was being done.

AWN: What has it been like for you collaborating in this way and working with other directors?

PB: Charlotte Bavasso of Nexus brought us together and we talked about stories and characters that we were interested in, and we tried to find overlaps, which is a completely unique experience. You never get to work with filmmakers or creatives in that collaborative way where you are each doing a separate film, but also sharing lots of ideas. It was completely refreshing and lovely. AWN: Was the collaboration only in the beginning, or did you also help each other along the way?

PB: It was more tangible in the beginning in that we were designing the house, alongside the production designer, Alex Walker.  The house needed to function in the three different stories, even though they were different in terms of aesthetics and scale. Completely new houses were built for each story, but they had to have the same silhouette and structure. But past that initial design phase, we were sharing a lot of the crew, and the filming schedule had overlaps. So despite the fact we were filming separately, I was shooting in the studio alongside Niki, for example, and I'd be able to go over and see what she was doing. We’d be able to ask each other questions, which is something we don't normally get. So I would say we gave each other a huge amount of support.

AWN: What was the original directive? For your particular chapter, how much were you provided to hang your story on?

PB: It was very open. The house was decided on, and then the story really could be anything set in or around the house. Our brains work in quite different ways, which is quite fascinating. So we each wrote out a synopsis of what we wanted to achieve, or the areas we wanted to go into, and that's effectively what we pitched.

AWN: What made you choose cats for characters?

PB: I love cats. There are certain animals I'm attracted to, and that I wanted to explore, and cats were always one of them. I like that cats have a lot of expressiveness and physicality, and they're very aesthetically pleasing. And it felt like the right animal to balance the apocalyptic setting. I remember at the time I was writing it, those wildfires were happening in Australia and there was this red dusty quality to the air, which was so beautiful, but also terrible because it was destroying people’s lives and homes. And so I had this notion of the beauty of chaos, or of the apocalypse, and the cats have a soft, captivating quality that worked for that. AWN: What does the medium of stop motion provide you that other animation mediums don't?

PB: I think it gives you an opportunity. It wouldn't be right for every story, just like live action wouldn't be right for every story. I am a big believer in the story dictating the medium. I think that stop motion allows you to tell stories that are surprising or perhaps a little bit magical. They allow you to tell difficult stories or universal message-type stories because they allow the audience to identify with the subject or the character in a way that, if you were in live action, would be almost too detailed. I think if you have a slightly stepped-back world, or a slightly unreal world, it's more fable-like and you can apply it to different instances or different realities.

AWN: Can you talk a little about the design process for the film?

PB: There were certain things that determined the approach we took. This was a house that was falling apart in a flood, basically. So that dictates a lot of things about the finishes on the walls, for example. If you look at pictures of the model, with the layers of peeling paper, it looks like a real house. It's actually very realistic, despite the fact that you're in quite a strange, surreal world. The finish is exceptional. You feel all those qualities of a dilapidated house that's falling apart and crumbling.

And then for the characters, I knew I wanted fur. So that dictates a certain level of scale because you can only get fur so small, which means that the puppets have to be quite large. And that means the sets really end up being quite large, as well. And I wanted very expressive characters, which dictates certain things about the head mechanics. How are you going to make those eyebrows in a feline work? Because you get a lot of expression from eyebrows. The character is based on a real cat, and yet it's your own version of a cat. So reality dictates the starting point and then you push towards how unreal you're going to make it. AWN: What were the biggest challenges for you on the project?

PB: Because the story is set in a flood, I wanted this encroaching mist, which is very tricky in stop motion because you have to control everything for every frame of movement. So we knew at the beginning that the water and mist were going to have to be post-production elements. Therefore, you end up shooting with lots of green screen, which is a massive leap of faith because you don't really know what it's going to end up looking like. And so that for me was the biggest challenge because I had to put a lot of trust in the team.

AWN: What do you hope audiences come away with when they watch the entire anthology, and your story in particular?

PB: I hope an audience feels inspired, actually. I think it's inspiring and uplifting to see these three very original stories and very original bits of filmmaking. Each film involves so much craft. Not that that should be at the forefront of the experience, but there's this added element in stop motion. And these puppets that are made by hand by really incredible craftspeople, who have built everything from scratch – it's just so inspiring what people can achieve.

Choc Chip Animation Riffs on Pop Culture in ‘The Art of Murder’
F is for Flake: The (Not So) Great Animation Robbery?
Re-VIEW: ‘Avatar: The Way of Water’ – A Miraculous Vision
‘Kung Fu Panda: The Dragon Knight’ Celebrates a Special Lunar New Year
END_OF_DOCUMENT_TOKEN_TO_BE_REPLACED