The Surreal, Stop-Motion World of ‘The House,’ Part 2

In the second of three linked articles, director Niki Lindroth von Bahr talks about her affinity for rodents and experience creating her chapter of Nexus Studios’ animated anthology, now streaming on Netflix. 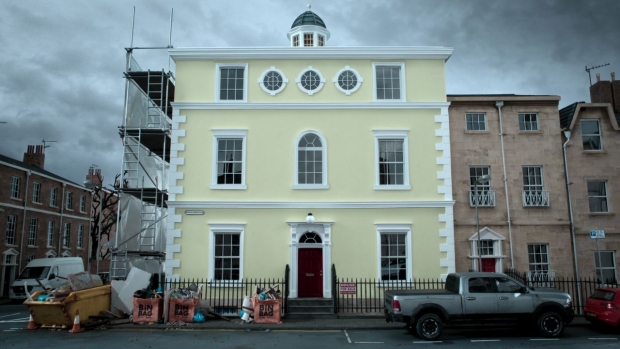 In The House, now streaming on Netflix, Nexus Studios has brought together four of the leading voices in independent stop-motion animation to create a dark comedy comprising three surreal tales about a mysterious residence and the individuals who make it their home.

In the second of three interviews, we spoke with director Niki Lindroth von Bahr about why she favors mice as characters, what it was like collaborating with other filmmakers, and degrees of darkness in animated entertainment.

AWN: Based on this film and your wonderful award-winning short The Burden, you seem to like mice, at least as characters. Do you have a particular affinity for rodents?

Niki Lindroth von Bahr: I always have ideas about what type of animals I use for certain films. In The Burden, for example, I used animals that were very common in medical experiments. But for The House, it's been quite interesting because for the first time I've been working with animals on different levels at the same time. We have actual insects, we have the developer and the human characters that are portrayed as rodents, and then there’s the truly odd couple.

But I chose the mouse as the main character because he's trying to get rid of these insect pests – trying to turn this house into a kind of soulless residence and climb the ladder of wealth and success – when he’s actually a pest himself. It just felt symbolic to me somehow, especially towards the end when he's kind of losing it and embracing his animal self a lot more.

AWN: How did you get involved with this project?

NLB: All of the directors were contacted by Nexus to see if there was any way we could collaborate on a project. I've been a huge admirer of both Paloma's and Marc and Emma's work, although I hadn't met them before. But we all use the same technique, and we do share a certain style, even though our styles are also different from each other. And so we met up at [producer] Charlotte Bavasso’s house in London, and just brainstormed a bit and came up with this idea about a house in which different things are happening in different times. We agreed that we would each have our own separate chapter, but still with connections to each other.

I mean, I was a bit nervous to be in this bunch of super-talented people. But Marc and Emma and Paloma have been such a huge support all through this process. We chatted a lot over Zoom and helped each other with script development and character design, everything. All of us were quite new to such an upscale project, so I think this was a perfect arrangement. You had your own film, but you didn't feel alone. AWN: What does stop-motion offer you that other animation mediums don't?

NLB: That's a good question. I mean, I am very fond of live-action film. And different techniques within the film medium have their own charm in different ways. But for me, it's been very much about being able to create my own universe and my own characters, and the excitement that comes with starting from nothing. Also, I make the puppets and the sets myself. I'm very tactile and I just love being hands-on and creating everything.

It's a wonderful way to work with realism, but in a kind of higher form. Even if it’s a super-boring or ugly environment, or a miniature that you're making, it’s always a labor of love. In my story in The House, for example, even for this horrible soulless, nouveau-riche furniture and other things, I get to just put so much love into it. It's therapeutic for me somehow.

AWN: How did you come up with the synchronized dancing, Busby Berkeley-like routine? Where did that come from?

NLB: I always like to work with contradictions and, even though this is the real beginning of our main character's downfall, when he's starting to totally lose it, I don’t think the process needs to be completely horrible. It could be quite fun as well. I mean, most of us have experienced being invaded by bugs in our apartments or houses, and it's just such a horrible feeling. I liked the idea of adding this weird, cheerful, Busby Berkeley style to that, as well as the challenge of trying to make a gross larva dance in a sexy way. It was just fun. AWN: What was it like for you to work on such a substantial piece of animated storytelling with so many more resources available to you? How did that affect you as an artist?

NLB: It meant a lot. I was a bit nervous to begin with, diving into something like this and being in charge of a much larger group of people, compared to when it was just me and maybe one or two assistants. It's something completely different. But I felt that all of a sudden I could concentrate a lot more on the creative part. It's just been such a pleasure to work with the most talented people in this industry, and they've all been so nice.

I spent some months in Manchester at Mackinnon & Saunders during the shoot, and also during lockdown, with my family. It's quite a tricky thing to bring your two-year-old to a place where you don't know anyone and everything is shut down. But just going to the studio the first day, it felt like everyone was just close friends to begin with. And that's so important.

AWN: It’s a pretty dark film, although it’s easy to imagine an even darker perspective. Did you get to do it the way you wanted, or did you have to tone it down to accommodate the fact that it was a big-budget production?

NLB: I think I ended up pretty much where I wanted to end up. I felt like I had a surprisingly large amount of artistic freedom within this project. I actually expected it to be less free, since it's so completely different from the tiny independent situation that I've been in before. But I got great support to do whatever I felt like. I mean, it's still obviously quite silly sometimes, but I'm very proud to have gone a bit deeper into darkness. I was definitely inspired by bits and pieces of David Lynch and thrillers like The Tenant and Repulsion. I was quite fascinated by the idea of mental breakdown within this very isolated location and what the loneliness does to you. Maybe I will make it even darker next time, but I didn't want this to be like a complete horror movie. AWN: What do you hope audiences take away from your chapter?

NLB: A certain itch, maybe. I don't go too deeply into how I want people to experience my work, but I always find it interesting to see, because I love to keep my audience a bit unsettled. Like, is this fun? Is this disturbing? I mean, my hope would just be to get a reaction, that it kind of sticks for better or worse. That you're not just forgetting it after two minutes is a good thing.

Choc Chip Animation Riffs on Pop Culture in ‘The Art of Murder’
F is for Flake: The (Not So) Great Animation Robbery?
Re-VIEW: ‘Avatar: The Way of Water’ – A Miraculous Vision
‘Kung Fu Panda: The Dragon Knight’ Celebrates a Special Lunar New Year
END_OF_DOCUMENT_TOKEN_TO_BE_REPLACED