The Surreal, Stop-Motion World of ‘The House,’ Part 1

In the first of three linked articles, directors Marc James Roels and Emma de Swaef talk about the inspiration and creation of their woolly story in Nexus Studios’ animated anthology, now streaming on Netflix. 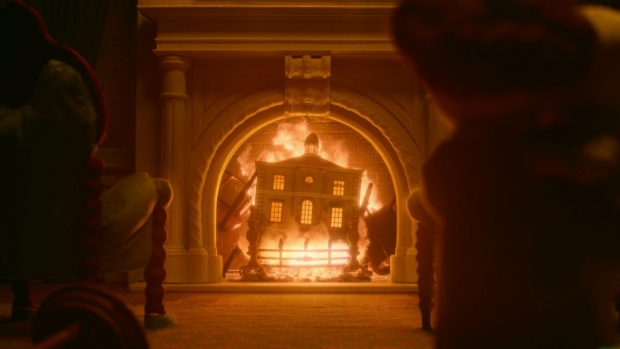 From George Pal’s Puppetoons, to Ray Harryhausen’s battling skeletons in Jason and the Argonauts and Nick Park’s Wallace & Gromit (to name but a few iconic examples), stop-motion animation has a long and illustrious history in the world of moving pictures. More recently, this venerable technique has been used to great effect in such landmark, award-winning short films as Marc James Roels & Emma de Swaef’s Oh Willy… (2012) and This Magnificent Cake! (2018), Niki Lindroth von Bahr’s The Burden (2017), and Paloma Baeza’s Poles Apart (2017).

Now, in an inspired production coup, Nexus Studios has brought together these leading voices in independent stop-motion animation to create The House, a dark comedy comprising three surreal tales about a mysterious residence and the individuals who make it their home. Featuring the voice talents of Helena Bonham-Carter, Claudie Blakely, Matthew Goode, and Miranda Richardson, among many others, the adult anthology is currently streaming on Netflix.

In the first of three interviews, we spoke with Marc James Roels and Emma de Swaef about the personal experiences that influenced their story and what it was like for them to participate in a group undertaking so different from their usual independent endeavors.

AWN: You’ve made several very different and distinctive films, including Oh Willy..., which won 80 international awards, and This Magnificent Cake! Your contribution to The House represents yet another departure of sorts. How did you come up with your story for this anthology?

Marc James Roels: I can't remember exactly how, but at some point we became intrigued with telling the story of the house before there was a house, the origin story, so to speak. I had been reading a graphic novel by Richard McGuire called Here, in which you see a corner of the world and how it changes through millennia. You see it as farmland, and when it was inhabited by Native Americans, and before that when there were dinosaurs. And then suddenly you’re in the 1950s and someone’s vacuuming the floor. And it kind of sparked off an idea, like what was there before the house?  And we sort of mixed that in with some personal stuff – a lot of our friends and family are going crazy right now over the housing market, as I think many people are.

MJR: Yeah, a lot of architects. So this housing thing was just becoming the main topic of discussion at every family gathering, and we had the idea of this house sort of hovering above us all the time. It sort of becomes an extension of yourself.

EDS: Also, our daughter was born the month that we came up with the story. So the whole idea of a baby just being born, the family visiting, and this house all sort of came together to form the story. AWN: You have a certain design aesthetic that’s been fairly consistent across your films. Can you describe your design process and how you came up with the characters for The House?

EDS: We always say that Marc's the filmmaker and I'm the production artist. I just kind of make these puppets – I don't really think too hard about them. I just follow my gut. But I was looking at a lot of Edward Gorey for reference. Usually, what I do is find a picture that I like and really try to imitate it closely. And it completely fails, but whatever comes out of that is the design.

MJR: We just end up choosing the most wonky-looking failures. We naturally gravitate towards them. We don't want it to look all perfect and polished. We just want it to look like it was made by a slightly obsessed, mad person.

EDS: It was quite important for us to hold onto that, to not lose ourselves too much in a bigger production. So I ended up sculpting a lot of the characters here, or just doing the heads and then shipping them to the company that was making them into animatable puppets. There was a lot of back and forth that way. Sometimes I think we held onto it a bit too much, that maybe there would've been some kind of interesting breakthrough if we hadn't been separated from the actual puppet builders.

AWN: How different was the animation process on this, compared to your previous films?

EDS: It was very, very different. In This Magnificent Cake!, the budget was so low that I basically made the 40 puppets myself with a little bit of help from the crew in constructing the armatures. But every single armature was wired, and this was all ball-and-socket. So the puppets were a lot more animatable than what we've used in the past. Also, normally I just had one puppet for each character, but here we had a lot of duplicates. By the end, there were like six Mabels and four Raymonds. So that was very different.

MJR: We were shooting in the UK at Mackinnon & Saunders. Nexus and their Line Producer Angela Poschet handpicked the team and brought in some of the very best people who have been doing stop-motion literally for decades. So there's this wealth of experience infused in every aspect of stop-motion filmmaking there. All these people have worked on really big films – from Wes Anderson to Tim Burton – but they still come back to do smaller independent projects. They're very passionate about it. So, even though we were in this more industrial mode, where we were a lot more of hands-off than in the past, we were working with enormously talented people who really surprised us with what they could do. That includes Clockwork Frog Films, and Andy Gent's team who worked on Story 2. AWN: How did having this big team and all of these resources affect your role as filmmakers? What did it allow you to do differently?

EDS: For This Magnificent Cake!, my memory is of working from 6:00 a.m. to 11:00 p.m. every day, carrying tables, moving trees, moving lights, tying down puppets… and it's just physically exhausting and gives you a lot less mental space to think about stories, to think about characters. So now we had all these people doing a lot of this work for us, which meant we could focus more on what our job really is as directors.

MJR: I mean, we're not getting any younger – we can't keep jumping around the studio.

AWN: In your film, you used practical fire and water, as opposed to CG elements. Can you talk about how that was decided and how you worked with the crew on it?

MJR: Oh, we really fought for that. Anytime the question was raised about doing something in CG, we just kind of slammed our fists on the table.

EDS: At the first meeting, we were asked how we wanted to do the fire. And our answer was, “Well, wool,” because everything in the film is wool. But then, of course, there was the question of whether we would shoot the practical effects on a greenscreen and then integrate them into the sets later, which was worrying because light is so important for us in the way it interacts with the puppets as they're moving through these fires through these sets. We were afraid that if we did all the elements separately, we would lose that connection, like the way the light falls onto a puppet. MJR: There was a bit of push and pull. They were showing us tests on green screen, but as good as those were, they just weren't quite there. I think even with the very best special effects in films, they might look really good, but there's something in the back of your mind that's never quite convinced because you just know it wasn't done then and there.

EDS: So what we did, in order to find our feet with the crew, is we started with a very simple fire scene, just the fires crackling in the distance. And Malcolm Hadley, our DP, made this underlying system with a hole in the set. And everyone got a bit more relaxed because the animator said, “Yeah, I can do this. It's not as hard as we thought.” And we just gradually got more complex as the film progressed.

That being said, though, the post-production team were really great, and when we looked at the other chapters, especially Paloma's, which is a lot more CG-heavy, and knowing how much of it was shot on greenscreen, we were so impressed with what they did. It's a different look, but it also looks amazing.

AWN: What do you hope audiences will take away from your story?

MJR: They can take away anything they choose to take away. We didn't write the story thinking, “This is the message that we want to impart.” We just kind of took all our anxieties and little niggles that we were thinking about and put them all in the most compelling story that we could come up with at the time. And we just hope it generates some questions.

EDS: But that being said, I mean, now we’re a family, ­– Marc, our daughter, and I – so for us that is the most important thing there is, family. And it might be simplistic, but the house is just a pile of bricks, and family is much more important. I hope that's the kind of realization that comes at the end.

MJR: You have these sorts of things that are quite obvious. But in between, there's the decisions that each of the characters make and the path that they choose to go down, and we hope the audience can find something in each character that they can relate to. That's what we'd want the most, for these characters to be relatable on some level to a lot of people.

Choc Chip Animation Riffs on Pop Culture in ‘The Art of Murder’
F is for Flake: The (Not So) Great Animation Robbery?
Re-VIEW: ‘Avatar: The Way of Water’ – A Miraculous Vision
‘Kung Fu Panda: The Dragon Knight’ Celebrates a Special Lunar New Year
END_OF_DOCUMENT_TOKEN_TO_BE_REPLACED