Complex, multi-layered 45-minute work is set in the late 19th century during Belgium’s colonization of the Congo Basin in West Africa. 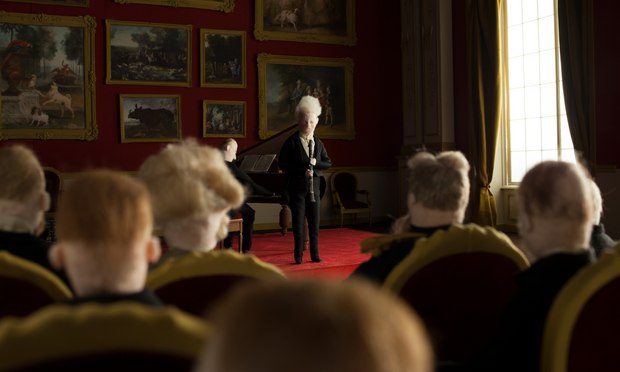 “I do not want to miss a good chance of getting us a slice of this magnificent African cake.”
—King Leopold II

It’s a tad early to begin making bold predictions, especially given the unpredictable nature of festival jurists, but for my money, This Magnificent Cake by Marc James Roels and Emma De Swaef is one of the finest animation films of 2018. This complex, multi-layered 45-minute work is set in the late 19th century during Belgium’s colonization of the Congo Basin in West Africa. Divided into five chapters, the film shows the experience and effects of colonization from a multitude of perspectives: a king (based on Belgium’s King Leopold II), slaves, a crooked businessman, and an army deserter.

This Magnificent Cake is an astonishing, sensitive and original stop-motion work that eschews time and subtly drifts between reality and illusion as it explores the crushed dreams and lives caused by the disastrous, brutal and inhuman effects of colonialism on both the innocent and the guilty, the good and the awful. With dashes of magic realism, Roels and De Swaef place us in a sort of dreamscape where we’re never quite sure where we are, and never quite sure if what the characters are experiencing is real or not. It’s wonderfully disorientating.

“I don’t really remember how or when we came up with the idea,” says Roels, “but I do remember both of us really getting into Journey to the End of the Night by Céline and being inspired by that. In one chapter, the main character meets a black servant sitting in the kitchen of a manor making bombs. In another chapter, the main character describes going to an African colony to work and how terrible that was. The one idea that stuck with both of us was that it was nearly always the very worst individuals that Europe had to offer who ended up going to these colonies.” While two chapters focus on the utterly devastating experiences of slaves, the other storylines are tragic in different ways. One involves Van Molle, a baker who has fled to Africa with the profits from his family’s bakery. The other follows Louie, an army deserter who escapes to Africa to avoid enlistment or prosecution.

“The two storylines,” says Roels, “were initially going to be part of one story, in which a young Belgian in colonial Africa is terrified by the very imposing and promiscuous behavior of his next-door neighbor. Many drafts later, this next-door neighbor with his odd habits and excessive drinking morphed into the character of Van Molle, the shady baker. Writing the film, we went through so many different iterations we sometimes wonder if one of those drafts lying somewhere in a drawer is the real gem and this just a meek compromise. As Emma often says, ‘Did we get off one stop too late?’”

The decision to make an anthology film came quite late in the pre-production process. In early drafts of This Magnificent Cake, Roels and De Swaef had no specific storylines or consistent characters. “It was supposed to be a fragmentary portrait of a period and setting,” says Roels. “Then we realized we were getting stuck and actually really missed following characters through a longer narrative. Right up until the start of the shoot, we were cutting out characters and settings, some of which had already been built (e.g., a manic Jesuit, a bereft ape). We wanted to find a good balance of drama, comedy, tragedy, absurdity and plain stupidity, which might have been a little too much for a single narrative to handle.” For those familiar with the duo’s previous work -- the widely adored and acclaimed 2012 short Oh Willy... and its follow-up Fight, created as the trailer for the 2013 edition of the Bruz National Animation Film Festival -- their distinctive “windy wool” look will be instantly recognizable. The materials enhance the oddly dreamy and realistic atmosphere of their work. “We try to use materials that walk the fine line between revealing what they are and creating the illusion of something completely different,” explains Roels. “Most things are pretty obvious, there’s a lot of wool and fabrics involved. We travel around a lot to find the right materials—a clearance sale of Flemish velvet in Roubaix, alpaca wool from Manchester, and horsehair from the horsehair capital of Rennes.”

Working alone on any film obviously has its own challenges, but a collaboration could potentially create other kinds of obstacles (administration, organization, egos). Not so, it seems, for Roels and De Swaef. “Writing and developing is always a long period of brainstorming together,” says Roels. “During production our roles are kept pretty separate. While Emma oversees set construction and puppet making, I’m mostly gathering reference material and working on the shooting storyboards. (These are storyboards that are actually useful during the shoot instead of the impossible flights of fancy of our initial boards). During the shoot, I am also not too involved with the animation, mainly keeping busy framing shots and lighting sets while Emma and her team set up the decors.”

One of the most striking aspects of the film is the subtle and pleasantly minimalist use of sound and music. So many films -- animated or otherwise -- too often rely heavily on audio effects to inspire emotional reactions in an audience. In This Magnificent Cake, the quieter moments (whether it’s a slave speaking to the decapitated head of a friend, a servant bathing the king after he’s pissed himself, or the extremely touching, albeit bizarre, moments between the drunk and a snail) generate tension and, more often, compassion for this sad lot of characters.

“We’re very finicky about using music,” admits Roels. “Finding the right music is always a long drawn-out process that usually takes months of listening to various things. Every now and then, a certain piece of music will transform the scene, and that is the best feeling. The film is actually pretty dense in terms of sound. Our sound designer Bram Meindersma was constantly running out of the amount of layers he could use in his software. There’s a lot going on in those quiet moments.”