All-new 3DCG animated holiday special, directed by Lino DiSalvo and adapted from Adam Reed’s award-winning children’s book of the same name, brings together a young boy hoping to make a friend and a clumsy reindeer with one short antler who always feels like an outcast; show premieres November 29 on Paramount+ and the CBS Television Network. 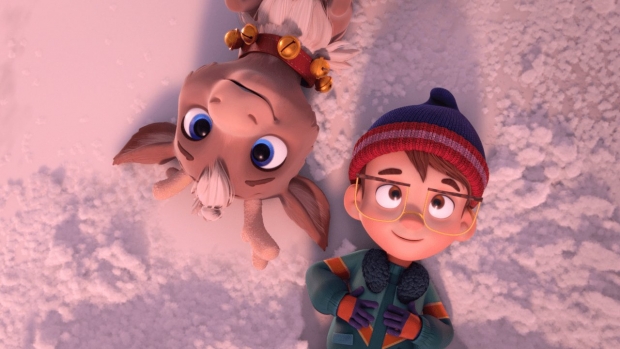 Wishes do come true. That’s been the message of Adam Reed’s “Reindeer in Here” children’s book and plush set since releasing in 2017. And it’s become Reed’s own reality as well, with a one-hour animated special of the same name, adapted from his book, debuting Tuesday, November 29 on Paramount+ and the CBS Television Network.

“It has been truly magical not only writing the book and sharing with my kids, but also sharing clips and rough cuts, seeing their eyes light up when the dailies came in over the past year,” says Reed, an executive producer on the special. “I am thrilled that the whole world will get to share and experience the magic of Reindeer in Here, but seeing my kids experience every element for the first time over the past couple of years has been one of the most magical and special moments of my entire life.”

In the special, a reindeer crash-lands like a shooting star into the bedroom of new-kid-in-town Theo. The North Pole native reindeer, named Blizzard (or Blizz) explains to Theo and the boy’s secret ventriloquist puppet how Christmas is on the verge of utter catastrophe. Someone has stolen Santa’s Wish Globe, which allows him to hear and answer the Christmas wishes of every child in the world, including Theo, whose only wish is for a friend. Right on cue, Blizz comes on the scene and, thanks to his directionally challenged flying skills and uneven antlers, knows all too well how it feels to be an outsider. But the wonky antlered Blizz, the comedic but timid Theo, and the show’s other unique characters must band together and use their different but valuable traits and talents to save the future of Christmas.

The result of their efforts is the birth of a magical holiday tradition like none other. “The bond between humans and animals is always magical and special,” notes Reed. “But even beyond that, in this story specifically, the fact that it is a young boy who feels different from all the other children, and a young reindeer with one antler smaller than the other who feels different from all the other reindeer, and they instantly connect because they feel they are the only ones that are different…the truth is, everyone is different, and being different is normal. That is what this movie celebrates both at holiday time and year-round.”

Reed first created Reindeer in Here in an effort to start a unique holiday tradition of his own, and to deviate from the otherwise stressful festivities that often surround Christmas. “When my daughter was born, the predominant holiday tradition book and plush set out there involved a certain item that you had to move every night and the kids couldn’t touch it or it lost its Christmas magic,” he explains. “Firstly, for me and my family, that seemed super stressful to have to come up with a new place each night to move it and a new ridiculous scenario to one up other parents with. Second, the fact that my kids would be afraid to touch it for fear it may lose its magic felt very off in a season where everything should be less stressful and more magical.”

He continues, “I searched and searched for what I felt would be a 100 percent magical holiday tradition that also wouldn’t stress us out as parents and couldn’t find one. So, I felt the need to create one.  It turns out there were tens of thousands of other families who felt the same and were thrilled to see Reindeer in Here enter the market.”

The book sold out on Amazon in under two hours and became an instant Amazon #1 new release and best-seller. In the last five years, Reindeer in Here has become the most awarded Christmas tradition brand of all time, having won 12 major awards, including Creative Child Magazine’s Book of the Year, a gold Mom’s Choice Award, and the prestigious National Parenting Center seal of approval.

“I am a producer by trade, and I originally started writing children’s books as a hobby just for my children,” says Reed, who also runs the Emmy Award-nominated production company Thinkfactory Media and has produced over 1,000 hours of television, including series such as Gene Simmons Family Jewels, the Marriage Boot Camp franchise, Hatfields & McCoys, and Rat in the Kitchen. “When I self-published the first one and it won some awards and sold well on Amazon, it gave me an inkling this might turn into more than a hobby at some point.” While this is Reed’s first-time producing animation, DiSalvo is a veteran of animated storytelling; his specialty, in particular, being stories that feature a human-animal friendship.

“I think I’m drawn to the wish fulfillment of a kid bonding with an animal and being able to relate to one another,” agrees DiSalvo, who previously worked in the animation department on films like Bolt, Meet the Robinsons, and Tangled. “In my opinion, it’s as primal as it gets. They each get to experience the other's point of view and learn from it. If the kid and the animal are each dealing with a specific problem, what does the other think of it? A fresh perspective is invaluable and can be emotional, not to mention super fun.”

Getting to direct Reindeer in Here, specifically, was a wish fulfilled for DiSalvo as well.

“I’ve always wanted to direct a holiday special, and I guess my wish came true,” he shares. “I was sent the first draft of the script and I immediately connected with the characters and the overarching theme of ‘Different is normal.’”

Reed adds, “All our main characters are different and unique in their own special ways, and I hope the entire audience takes away how special it is to celebrate our uniquenesses.” Uniqueness was also part of fleshing out the look of Reindeer in Here’s animation. When it came to bringing Reed’s illustrations to life, DiSalvo says one of his big goals was to capture the look and feel of the illustrations from the book. The characters were rendered using a dry brush technique to mimic the book's artwork, paying special attention to creating strong character silhouettes.

“We wanted something that would be contemporary but classic,” says Reed. “If you look closely, you can really feel the unique textures that were hand painted on each character and show up in scenes throughout the film.  Lino and the JamFilled team exceeded my expectations at every turn, and I think it really helped to bring the characters and world to life.  I don’t think if you are not an animation expert you will notice, but you will feel this is very different than what has been out there before in this space. We are super proud of how incredibly unique it looks.”

DiSalvo’s other main goal for the animation was to deliver a film with, in his words, “smart acting and strong, storytelling poses.”

“I wanted to bring my many years of Disney Animation experience to the project,” he shares. “During animation dailies, we spoke a lot about acting with the eyes and brows, being sure to respect the moment the character is living in. My favorite animated films are the ones where the characters are animated in such an honest way, you're drawn into the performance.”

It’s a different tone for Christmas animations. Whether they’re stop-motion, 3DCG, or 2D animation, holiday specials tend to have that signature holiday look. There’s just that little extra spirit and cheer, that extra bit of color. Reindeer in Here shows that all the sparkle of the season can be married well with believable characters who, for all their relatable dialogue about self-esteem, can still deliver the feel-good friendship pep talks and slap-stick comedy that a Christmas movie wouldn’t be complete without.

“There is such a magical, ‘other-worldly’ feel to animation that no matter what age you are, it transports you to a special world that only exists as you watch,” says Reed. “For some reason, whether old or young, or Rudolph or Blizzard, we fall in love with holiday movies like this as kids, and they stay with as we age.” Despite being given a tight deadline, with only 15 months from script to final render, Reed and DiSalvo are confident they’ve done the growing legacy of Reindeer in Here proud and, more than that, have created an animated story that will show up proudly on the family flick docket each year.

“There are those holiday classic animated movies and specials that, for some reason, have just a touch more magic and nostalgia that we want to keep coming back to them year after year,” says Reed. “We set out to make a Christmas classic, and I am hopeful we have, and that audiences will return year after year to watch Reindeer in Here with their families.”

He adds, “Everyone did this movie for the right reasons, and it shows when you watch the film. You can see and feel the heart and soul in the magic of the movie. The biggest reward is that now I have the opportunity to share what I originally created for my own family, with the entire world, to not only celebrate the uniqueness of every child, but that wishes really do come true, especially those at Christmas.”

Reindeer in Here airs November 29 at 9:00-10:00 PM, PT/ET on the CBS Television Network and will be available to stream live and on demand on Paramount+. The special immediately follows the holiday classic Rudolph the Red-Nosed Reindeer (8:00-9:00 PM, ET/PT).