The one-hour show, based on Adam Reed’s best selling children’s book of the same name, was also created and executive produced by the ‘Archer’ producer, and premieres on CBS this November 29. 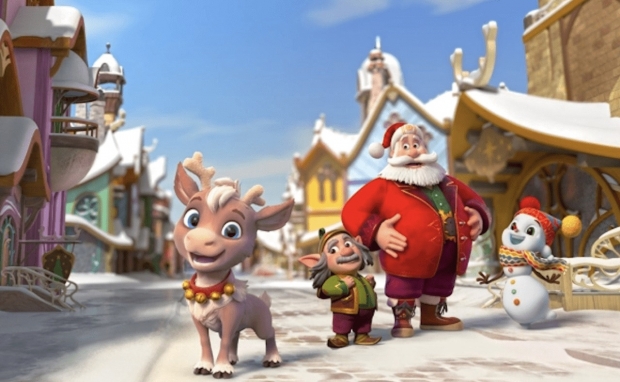 It may not even be Halloween yet, but a new Christmas special is on its way! Reindeer in Here, a one-hour animated holiday special, is based on the children’s book of the same name, written by Adam Reed (Archer, Sealab 2021). The book has won numerous awards, including the National Parenting Center seal of approval and the gold Mom’s Choice Award. It seems Reed has perfected the art of writing for children as well as crafting edgy adult animated humor.  The Reindeer screenplay was adapted by Greg Erb and Jason Oremland.

Reindeer in Here follows Blizzard (Blizz), a young reindeer from the North Pole, who (similar to Rudolph), is different: he has one antler that is smaller than the other. However, his unique feature doesn’t stop him and his misfit friends from saving Christmas, creating a family tradition, and showing Santa how his inventions can improve Christmas.

Creator and executive producer Reed explained to Deadline that the theme of the show is “Don’t hide what makes you unique,” adding, “This joyful hour of television, meant for the whole family, celebrates just that. Reindeer in Here is a story that encourages not only accepting our differences but celebrating them. It’s a story filled with laughter, joy, friendship, and heart that we hope will join the list of beloved holiday classics families watch together year after magical year.”

“I fell in love with this project the moment I read the script, and immediately connected with the ‘different is normal’ message,” said executive producer and director of Reindeer in Here, Lino DiSalvo (Frozen, Tangled, Bolt). “I love that Blizzard, our hero character, no matter the situation, has belief in himself, even when others might not, despite his differences.”