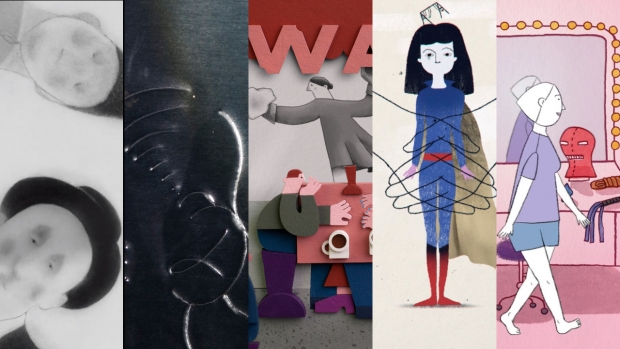 Alright, for November (or what’s left of it), here are some films that you won’t see on Oscar lists but have garnered some love at a variety of film festivals in 2022. Strangely, as I was in the midst of writing this, I noticed that this crop of films has overlapping themes that address sexuality, gender, identity, and the human body. Ashamed of his wife’s plump body image, a man tries to secretly give her a serum that will make her thinner. However, the wife catches on and reverses their cups. Soon, the man begins to rapidly shrink to the point where he is unable to work and is frowned up as a freaky show by passersby. The wife and her new lover find a place perfect for freaks like him: the circus.

The monochrome palette, minimal soundtrack, and claustrophobic shots (at times reminiscent of silent films and film noir) all combine to create an unsettling environment that mirrors the blandness and stupidity of both the man and the judgemental society around him. As the man changes from villain to victim, you’re never quite sure when to laugh or wince at his rapid downfall.

With its echoes of The Incredible Shrinking Man and hints of Joanna Quinn and Michaela Pavlatova, A Tiny Man is a darkly funny, sadistic, and blunt critique of sexism, masculinity, and the overall cowardice and pettiness of humanity. Animated on what appears to be sheets of aluminum foil with paper clips that are twisted and tweaked to create various abstract images suggesting animals, insects, and humans momentarily form. At various points there are scenes that resemble x-ray imagery and stained glass - which is fitting given that the film seems to be set in a psychological cave, a dark cloistered personal space where bodies, faces, creatures, and all sort of oddities are discovered and explored.

The free jazz soundtrack, along with occasional scrapping sounds (and flashes of the filmmaker’s hands and voice) creates a playful, ghostly, and claustrophobic atmosphere as a body shifts from darkness and uncertainty towards light and life.

How this film hasn’t gotten more love is beyond me. Sliver Cave is, without doubt, one of the most unconventional and refreshingly innovative animation shorts of 2022. Maybe it’s too artsy for the animation circuit, more in line with the installation crowd? Bah. It’s a beauty, wherever you put it. Born blind, a boy suddenly sees light at age seven. He soon learns that he has an unusual medical condition that results in light and images taking seven years to reach his retina and brain. In short, everything he sees happened in the past. The result is constant confusion and an obsession with the illusion of a reality that is no longer.

Using a combination of stop-motion paper cut-outs (representing present time) and black and white drawings (representing the past), with a vibrant and beautiful color scheme, Slow Light (which has some obvious parallels with Theodore Ushev’s 2016 Oscar nominee, Blind Vaysha) shows us an individual so focused and lost in the long gone past that he’s unable to be present, to just be. He only sees what was, not what is and what might be. Commissioned by the NDE (short for the very long and bland name: Interdisciplinary Research Platform Normality Difference Education), #BINARYGENDERNORM: GIRLS explores gender biases in school settings, behaviors that have been historically inscribed upon boys and, especially girls at a young age (e.g., girls are caregivers, boys excel at sports). The film attempts, via some beautiful and concise illustrations and engaging - if occasionally overbearing - narration to deconstruct these stereotypes and breakaway from the notion that women are just second-class citizens existing to serve men. Magical Caresses is a mini-series of animated documentaries created by Lori Malépart-Traversy (whose 2016 award-winning film, Le clitoris, also appears to have inspired the mascot designers of the 2024 France Olympics), that combine history and comedy to examine female sexuality. The series is adapted from the Caresses Magiques book series written and edited by Sarah Gagnon-Piché and Sara Hébert.

While the narration is at times a bit to… umm… dry and dominant (we are never given a chance to just sit back and explore the imagery…conversely one could argue that the creators didn’t have confidence to let the imagery convey more to the viewer), the series is humorous, straightforward and, unfortunately, needed.