The Animation Pimp: Deviated Preverts or Making ‘Toomas Beneath the Valley of the Wild Wolves’

Chris Robinson reflects on the epic ‘handyman’ we first came to know and love in ‘Manivald,’ talking various absurdities with filmmakers Chintis Lundgren and Draško Ivezić. 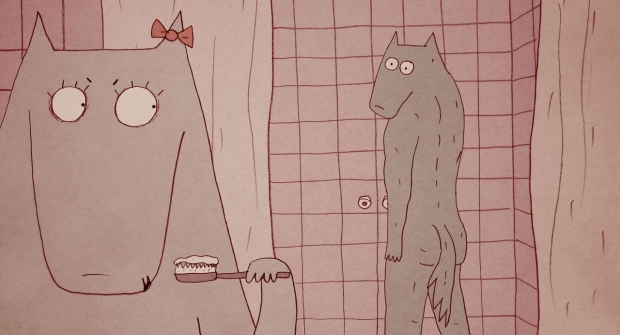 Ah.... the smell of Oscar season, when cinematic artists around the globe salivate over the all mighty glory of AMUrica’s big tasty makers....

... Forget that...it’s too cynical... I’m trying to write this to help Chintis Lundgren and Draško Ivezić get their prevert film, Toomas Beneath the Valley of the Wild Wolves some Oscar love.

I mean, I don’t know why they want it. It never seems to help anyone. But I guess they can impress their uncles and aunts and neigh...

(sorry I was making coffee) Animation, these days, skirts and stumbles between abstract, tedious, eye-rolling predictability or tepid, self-important takes on complex social issues with a pinch of woe is me and a dash of humor that only rare pet breeds in Eastern Ireland find tickly. Toomas Beneath the Valley of the Wolves is all of those things and oh so much more.

Co-produced by Chintis Lundgreni Animatsioonistuudio (Estonia), Adriatic Animation (Croatia), and Miyu Productions (France), Toomas Beneath the Valley of the Wolves is a sort of prequel to the duo’s Godardian domestic thriller Manivald, where we first met the ‘handyman,’ Toomas.

Toomas in the Valley of the Wild Wolves is an origin story of sorts, explaining how Toomas became a ‘handy’ man (insert cliché reference to comedy sketch by influential British comedy troupe to display vast cultural knowledge to readers). After spurning the sexual demands of his lady boss, Toomas is fired. Ashamed to admit the truth to his wife, Viivi (who is pregnant and caring for their two kids), Toomas ends up taking on a lot of freelance ‘handiwork’ to pay the bills. Meanwhile, neglected and knocked up Viivi ends up at Alexandra Horn-Eye’s empowerment seminar (okay, it’s sort of a S&M haven).

From there, lots of kinky shenanigans transpire involving cowboys, a movie director and leather clad wimps.

You get it, right?

Inspired by Russ Meyer (notably his 1970 feature, Beyond the Valley of the Dolls) with a dash of Sergio Leone, Toomas in The Valley of the Wild Wolves is part camp, part matrimonial melodrama. The character design, deadpan tone (loaded with intentionally eye-rolling double entendre) and voices (notably Draško Ivezić ‘s hilarious, deep voiced Toomas) all combine to make this one of the most genuinely funny and morally questionable films in my recent memory.

As the sweaty anticipation of Academy decisions awaits...this bored and quite lazy creative duo took a moment from making coffee to answer my pressing (see what I did there? Pressing...press...coffee...) questions about art, awards, Ireland, beauty and ethics.

What do you think is the essence of winning an Oscar?

Chintis Lundgren: It’s an opportunity to bring the idea of Žorž into the home of every suffering housewife.

Draško Ivezić: And a chance to see if anyone needs some fixing… wink, wink.

How could you convince the audience and judges that you deserve a nomination?

CL: I could send Toomas to fix their washing machine. I think that could work, no?

DI: All those Academy members must be very lonely… sometimes.

What is the essence of a woman?

CL: To be served by Žorž!

DI: What she said.

If you are nominated, what will be the first thing you do?

DI: What she said.

What is your favorite body part?

CL: What he said.

What do you think is the greatest environmental problem today (today is Thursday, FYI)?

CL: All those broken washing machines.

What is ‘success’ for you and what was the best lesson you learned from your mommy?

CL: Success is when Alejandro Hardon invites you over.

DI: And mommy too!

What sacrifices have you made to make this film?

What bothers you most about what is happening in Ireland today?

CL: All those leprechauns who were never properly whipped.

DI: All those lonely leprechauns!

Would you rather be smart or sexy?

DI: Sexy, of course! How else to entertain all those lonely souls?

How could you save mother earth in your own small way?

CL: By introducing her to Žorž.

DI: I don’t know but I could save all the mothers and their washing machines.

If you were isolated on an island, what 3 things would you bring?

CL: As long as it’s really an island and not Ireland: Žorž (yes, he is a thing!), coffee and a whip.

DI: I would never go on an isolated island; this would defy my purpose.

If you could invent one thing, what would it be?

What has been your greatest achievement?

CL: Getting out of bed. Well...I know that I speak for all of non-Irish humanity when I say thank you for everything you have done. All of us outside of Ireland will be crossing our pinkies in hopes of your unlikely Academy Awards success.

Before or after you watch the limited online screening engagement of Toomas Beneath the Valley of the Wild Wolves, check their making of video that shares their tense and arduous process of creating this ‘masterwork.’

Behind the Scenes - Toomas Beneath the Valley of the Wild Wolves from Chintis Lundgren on Vimeo.