This month’s animated shorts survey includes ‘IIzuna Fair,’ ‘My Year of Dicks,’ ‘The Pattern,’ ‘The Record,’ and ‘Vampire,’ all in competition at the Ottawa International Animation Festival, running September 21-25. 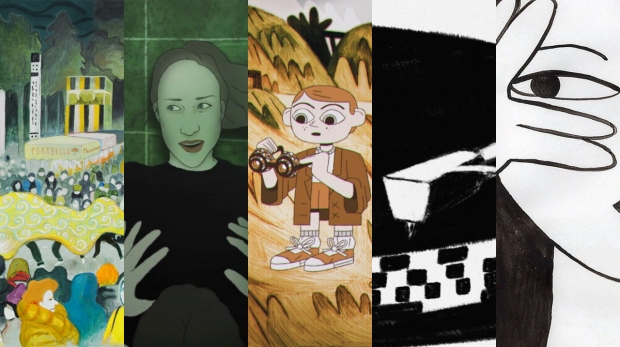 In this month’s Binocular Briefs edition, we preview shorts playing in competition at this year’s Ottawa International Animation Festival (OIAF), which starts this Wednesday, September 21, running through September 25. Since I do the OIAF programming, this also gives me an opportunity to understand and explain what appealed to me about these specific films. A camera pans slowly left past what appears to be a forest seen through the windows of a home where a woman sits, a child plays, and a man stands as his blurred head shifts and shakes in a state of obvious chaos. Meanwhile, a ghostly red figure repeatedly climbs the stairs of the house, passing by the distracted family members. As the camera continues to pan, another wall reveals a black and white scene of a man wandering. The camera continues to pan outside towards other scenes.

Cryptic and haunting, IIzuna Fair seems to capture a moment in a man’s life when regrets and failures clash and collide in his troubled mind. I can’t tell with any certainty what the film is really about, but it strikes me as a rather sad piece about not living the life you thought you wanted and only realizing that after the fact. Do we see images of a life unlived? A man whose car has crashed (we see a passing image of a man looking on in horror at his overturned vehicle) and perhaps taken the lives of loved ones? A past that wasn’t? A lonely man unable to connect meaningfully with himself, let alone the world around him.

Whatever your interpretation, IIzuna Fair is a beautifully calm and hypnotic piece of visual poetry about a life in disarray. With so many animation films (commercial and indie) always seeming to be in a hurry to nowhere, it’s refreshing to experience a languid and meditative work that offers no clear answers, just scattered moments and passing emotions. Sticking with the theme of forgotten memories, Jonathan Laskar’s The Record is a story about a music shop dealer who is gifted a magical record player by a mysterious visitor that can apparently read minds and retrieve lost memories.

After revisiting a lovely memory of his mother, the dealer closes his shop and becomes obsessed with letting the record guide him through his forgotten past. Time passes quickly, the shopkeeper ages and appears not to have left the shop since receiving the record. He fastidiously creates cassette copies of every memory the record plays. As the man drifts deeper and deeper into his past, painful memories appear.

Gracefully skirting between black and white imagery and stunning color flourishes, The Record seems to echo William Faulkner’s line from his 1951 novel, Requiem for a Nun: "The past is never dead. It's not even past. "

Yet, in Laskar’s hands, we should be careful about revisiting and ensure we don’t overstay our welcome. If we linger too long in memory, we risk getting stuck there (like a skipping record player that plays the same part again and again) instead of living and being in the present. It’s good to remember, but maybe better to let go.

The Record - trailer from punched paper films on Vimeo.

On the heels of her film, Space, winning Best Student Animation at the 2021 Ottawa International Animation Festival, Zhong Xian returns with another frenetic and darkly comic tale about screwy relationships.

Drawn on paper using acrylic paint and crayon (with occasional flourishes reminiscent of Canadian animator, Michele Cournoyer), Vampire tells a tale about a woman’s fella who goes missing.  After fruitless attempts to find the missing lover, she struggles to move on and returns to her lonely apartment above a bar (where we also visit a possibly blind pianist along with a neighbouring lesbian couple embarking on sex games to spice up their lives)… but suddenly he returns, as, well you guessed it, a vampire. Their relationship, as you might imagine, undergoes some changes, but not in a way you imagine.

Funny, raw, surreal, and sexy, Vampire explores the soul-sucking nature of some relationships. Love and codependency can turn some into vampires and others into butterflies. Hungarian student animation has been consistently wooing the festival circuits for the last few years. Who knows if it's the quality of teaching or students, or something strange in the waters of Budapest, but it's given the animation world acclaimed new artists like Réka Bucsi, Luca Tóth, and Nadja Andrasev.

The Pattern continues that tradition of strong Hungarian student work (and it’s one of three Hungarian films in competition at the OIAF this year). In this clever and trippy work, three people (a large guy, an old man, and a kid) all live in separate realities:  The big guy in a bizarre landscape; the old guy in some black and white sci-fi world; the kid in a fantasy world. All three (and it’s possible that all three are the same people at different ages) seek the same yellow flower: the big guy so he can rebuild his house of honey; the old guy because he’s missing nature in a society overrun by robots and technology; the kid because he’s broken his mom’s flowerpot.  They all believe the yellow flower will bring them happiness and solve their problem, but who will succeed in capturing the flower?

A touching, surreal, and insightful sci-fi exploration of what happiness means to people at different stages of their lives. Just for fun, I thought I’d throw a curveball and review one of the Animated Series competitors. My Year of Dicks is a refreshingly unique series produced by indie animator and GLAS founder, Jeannette Jeanenne.

Written and created by Pamela Ribon (Moana, Ralph Breaks the Internet), My Year of Dicks is a bitingly funny autobiography about, well, a young woman (Pam), trying to get laid in suburban Houston circa 1991. Unfortunately, Pam’s romantic visions of the ideal lover clash with the reality of the frequently doopy young men around her. The writing is sharp, honest, and funny and beautifully captures the awkwardness and naivety of youth.

With echoes of Waking Life and assorted coming of age films (Superbad, Dazed and Confused), My Year of Dicks (which features contributions from an assortment of indie animators like Brian Smee and Amanda Bonaiuto) is a visually innovative mix of collage, rotoscope, archival footage, and drawings that all enhance the clash between imagination and real life.