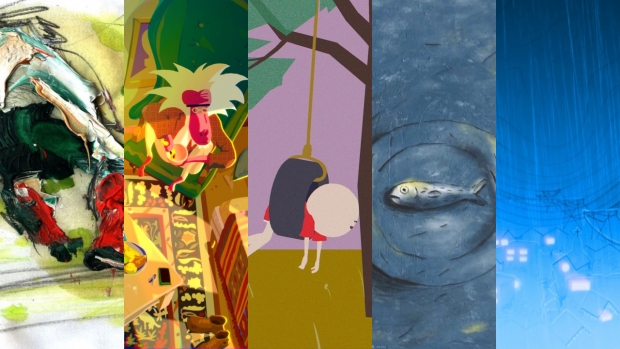 We’re trying something new… Binocular Briefs, a monthly survey of animated shorts that have caught people’s attention on the festival circuit. While we’ll mostly focus on the many outstanding films that fly under the radar at festivals (i.e., don’t come home with awards), for this debut entry, we’ll take a look at a few films that have collected some hardware already. On a warm summer day, a family gathering is underway, filled with music, food, and drinks. Assorted family members eventually gather around a table to reminisce about the recently deceased uncle Botão. Overlapping memories tell the story of a man who served in the Angolan Civil War before heading to France, where he worked as a garbage man for 30 years. The memories come to life on the table as relatives recall his love of life, generosity, and the van loads of salvaged “trash” that he would bring back to Portugal and gift to everyone.

Accompanied by a gentle soundscape of folk music and natural sounds that put us right in the vibe of a lazy, half tipsy sunny afternoon, Gonçalves mixes rough, sketchbook-like black and white drawings (that have hints of Joanna Quinn) with occasional dashes of ocean blue and warm yellow touches to perfectly capture the warm and loving memories of the family members.

While The Garbage Man (which won the Grand Prize at the 2022 Animafest Zagreb festival) is a deeply personal work, Gonçalves subtly touches upon issues of cultural and class differences (some recall the luxuries that French homes had compared to their own in Portugal) through Uncle Botão’s recycling of trash. What the discarders saw as garbage, Botão saw as jewels. While it’s not the prime intent of the film, it does remind us that we’ve become a disposable society, always looking for the next new shiny object to fill our empty lives with.

O Homem do Lixo a film by by Laura Gonçalves - Trailer from Agência - Portuguese Short Films on Vimeo. Ah, the Estonians are back! Okay, well they never went away, but in 2022 there’s been some solid work coming out of the Baltic nation. Sander Joon (Velodrool, 2015) is one of the bright young(ish) beacons of the new generation of Estonian animation. His latest film, Sierra, is a beauty. It’s got a striking, colourful, and rough design style mixed with a heavy dose of deadpan humor and absurd scenes. What makes Sierra somewhat unique (in an Estonian context) is that it’s got a heart. Now, I’m not saying that Estonian animators just make these soulless films (they don’t), but Sierra is a very personal (the film incorporates a stop-motion scene that was actually made by Joon’s father in the 1980s) and touching film about parents who try to force their kids to follow their tastes and interests (like when I continually try to convince my kids of the beauty of hockey, Guided by Voices, and Estonian animation).

The basic plot is that an auto racing-obsessed father sneaks his young son out (behind the mother’s back) to take part in some absurdist car race. Things don’t go so well and the kid ends up becoming stuck in a car tire (I won’t say more). Unfazed, the father carries on with the race. Things really don’t go well.

Sierra is funny, surreal, and yet, at its core, it’s about love, about our need for intimacy, compassion, and, primarily, connection. Hungary is a country whose animation often shares the same striking graphic design and absurdist humour as the Estonians. It’s maybe not surprising since they’re part of the same Uralic language family (as are Finns).

Upon first glance, Amok (which took home the Cristal at the 2022 Annecy Festival) lures us in with its bubble gum candy-colored backgrounds and deadpan humour. In the first scene, a handsome young couple sit in a parked car by a cliff. They’re overwhelmed with love. The guy pulls out a ring and proposes. Overjoyed, the woman kisses him, but then suddenly the man is distracted by a creepy-looking flying gnome headed towards the car. The man freaks out and hits the gas pedal, sending the car hurling over the cliff.

In the aftermath, the freshly crowned fiancé is dead and the man is horribly disfigured. While undertaking a physical, emotional, and mental journey towards recovery (which includes a session with a monkey therapist - a nice jab at psychiatry - the man finally has had enough and decides to kill himself (and his gnome demon). However, he’s rescued by a young woman. The two fall in love, but can the man keep his demons at bay? Can the woman?

Behind the veil of the deadpan humor, wild action sequences, ghoulish gnomes, and colourful exteriors, Amok is a story about mental illness, personal demons, dysfunctional families, and the constant struggle to let go of a past that just keeps getting in the way of the future. A blistering, breathtaking beauty of a work that takes football (or soccer as it’s called in North America) as its diving board into animals, politics, history, and culture. 11 (or XI if you prefer roman numerals) is a dizzyingly brilliant piece of improv that uses a flurry of ink on paper, pastel, watercolor, and oil on canvas tools to put us inside the heads of what might be going on as a football player stands alone on a field with only the goalie, a net, a ball, and thousands of fans. In those moments it’s not just about a goal or a game, but about life.

As players dance and dart across the field, they occasionally transform into wild, free-roaming animals. Flashes of archival footage dash across the screen, perhaps linking the outside, unseen pressures on these athletes. They’re not just playing a game, they’re playing for a city, region, or country. There’s history and politics constantly at play during each moment of a game (which reminds me, as a Canadian, of hockey’s Montreal Canadiens when each game against their bitter rivals, the Toronto Maple Leafs, was also a symbolic battle between French and English Canada). Speaking of Canada, here’s a pleasant surprise from this year’s animation festival circuit. A virtual unknown (in fact, I believe this is her first film), Marie-Noëlle Moreau Robidas burst into the gates with this hypnotic, mysterious, and touching work about loneliness and alienation within the context of the beautiful but deadly ice storm that hit parts of Canada in 1998 (a storm I experienced firsthand) and knocked power out for many. The ice storm was a strange event. The ice-covered trees and roads were gorgeous, and for some, it was a time of play and companionship, a break from the daily tedium of capitalism. For others, especially the elderly and homeless, it was horrific. Already alone and alienated in normal times, they found themselves even more adrift from society and even life.

Dominated by an ice blue hue, Triangle of Darkness is set in a rural part of Quebec. An apparent homeless woman walks the icy streets until she comes upon a seemingly empty home. She breaks in, enjoys some food and drink, but then finds she’s not alone.

Triangle of Darkness is a mature, patient, and touching ghost story that suggests the real tragedy of disasters is not the lack of electricity, but, as so many felt first-hand during the pandemic lockdown, the lack of human warmth and connection.