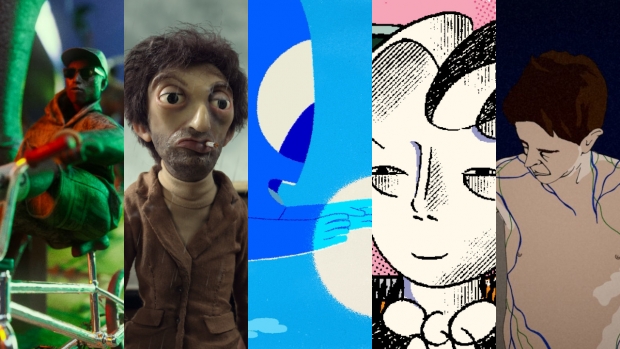 Let’s get right to it… Well, this was a pleasant surprise when it landed late in the entry stage of the OIAF. Animated music videos are continuing to straddle that line between industry and experimental, perhaps more than any other sub-genre. Perhaps it’s because so few musicians or labels want to pay for the videos. That’s shit, but it does allow for a lot more creative freedom and experimentation, to the point where music videos are increasingly more in the ballpark of experimental animation than commissioned.

Which brings me to this mind-blowing music video for Pharrell Williams. I couldn't care less about the song (it is catchy, I admit), but man, the vision and visuals... all have a look that cross-dresses the food animation zoetropes of Alexandre Dubosc with the clay animation of Will Vinton. ‘Course, it’s neither. It’s all CGI.

Heck, I’ve said enough. The whole thing is here. You won't learn anything new about existence, but that's okay. Just watch and savour. With mild respect to Aardman, Vinton, Laika etc., the most consistently innovative and interesting stop-motion studio (and, founded in 1957, also the oldest) remains Estonia’s Nukufilm, which, despite decades under Soviet clouds, then the cold winds of global capitalism, and almost annual battles for Estonian film funding, continues to produce unique, strange, and uncompromising works. I don’t quite know how they survive, but they do, and I’m glad.

One of the recent short films from Nukufilm comes from a veteran, Priit Tender, who for a couple of decades has shifted between puppet and drawn animation. His latest film, Dog Apartment, has the expected Estonian strangeness (is it really that odd or is it a case of not treating the audience like twits and sort of encouraging a stronger audience? Why should an audience be passive? Why not be challenged? Audiences, not just artists, can also be disappointments.)

In Dog Apartment, a man (who sleeps in some sort of brown Michelin man-like outfit) lives inside... well... a barking apartment. Violent shaking and barking (courtesy of the sink) wake the man each morning. His only recourse is to feed the sink sausages.

Each day, the man drives along dirty, muddy roads, past a once flourishing natural landscape that has been decimated (oh, he also passes a chicken that has an axe for a face). He eventually arrives at a butcher shop inside a cattle barn. Unexpectedly, the man begins to perform a ballet dance for the cattle. See, it gets them all aroused and the milk comes a-pouring. The dance, it seems, is what he must do to get sausages as an exchange. It's also the only moment of shared cultural expression for the two men.

Bizarre scenarios aside, this is a darkly funny portrait of troubled souls (the butcher has lost a leg and appears to have been a cellist in a previous life) who have lost their way, their voice, their sense of self. They’ve now been exiled to a dank, rural shithole that seems like it could be a backdrop in Tarkovky’s Stalker. Dog Apartment is, in some ways, a lament for a world without culture, art, or nature, as well as a warning about what such a world might look like. Luce and the Rock, Britt Raes, Belgium, France, and the Netherlands

I rarely talk about animation for kids (because much of it stinks), so let’s correct that. Most of the animation made for kids (at least from studios) is akin to a mental diet of Coke, Doritos, and fast food. It’s unhealthy for the mind and senses. Children are frequently lectured and told to be suspicious of adults.  Rarely are young audiences encouraged to ponder, to explore, to figure things out... The studios and their masters just want it all fast, simple, and easy to digest.

Thankfully, there are a lot of alternatives to the crass nonsense dominating global screens. Short film animators like Julia Ocker and Isabelle Favez, to name a couple, continue to produce thoughtful works of art for young audiences. You can add Britt Raes to that list as well.

Her latest, Luce and the Rock, follows a young girl (yes, her name is Luce) who lives in a small village with her family and other neighbours. Together, they all live a simple, comfortable existence. Life is shaken when a giant boulder destroys all the village homes.

When Luce meets the giant boulder creature, she learns more about him and realizes that he’s not all that different from the village inhabitants after all.

A beautifully designed (dominated by sea blue, red, and yellow) and gentle tale about tolerance, compassion, and understanding. In a time when everyone is quick to jump the gun and condemn, cancel, and ostracize, Luce and the Rock is a plea for communication and understanding... and a reminder that we’re all human and sometimes we need to step outside our comfort zones and inside the shoes of others to really get an understanding of who they are. As ol’ Mr. Dylan sang when he was young Mr. Dylan (okay, i’m cheating. I know the second verse is a bit nasty! Forgive Mr. Bob): I wish that for just one time/You could stand inside my shoes/And just for that one moment/I could be you This was one of the oddball surprises of last year. With "streaming" biggies and network TV continuing to trot out the same, tired series cliches and narrative templates... I mean, man, the idea of breaking free from the rigidity of television rules was that streaming channels could really raise the bar and explore new directions. No more time limitations, etc. But nope, it’s still the same safe, mindless stuff week after week (well, at least what hasn’t already been cancelled). It’s basically appealing to an audience that just wants to fuck without seduction, without foreplay or mystery. It’s a just drop your pants and do it kind of culture.

Fortunately, bold series like Safe Mode can be found on sites like YouTube. Created by Canadian artist Justin Tomchuk, this mini-series is set in a digital world called "Interface." Much like in our world, the interface is corrupted and forced to run in safe mode. The main protagonist, Smear, is an agent trying to track down a virus so that Interface can resume its natural state. In this episode, Smears encounters a wise ass kid.

The result is a wonderfully bizarre lo-fi piece of sci-fi. From the U.K. resident master of darkly comic rotoscope works (Family Portrait, Stand Up, The Pub), Scale, based on Will Self’s short story of the same name, follows the downfall of a drug addicted, recently divorced father obsessed with highway roads, who lives next to a miniature village. With each daily hit, he soon starts to lose his own perspective and scale of life and how it got to this point. Basically, it’s a druggie version of an alcohol fog.

Visually, Pierce again relies on heavily distorted rotoscope that really enhances the fuckedupness of his protagonist’s states of being. The rotoscope gives a beautiful split quality here that forcibly fuses horror and comedy, reality and fantasy, the well and unwell.

If there’s a fault with the film - and I believe it’s really an issue that originates in Self’s story - is that it’s tough to feel for this guy. He is a cold narcissist and you sorta don’t really care if he lives or dies in the end. That said, unwitting assholes who are unwell and caught in the web of addiction deserve compassion too.