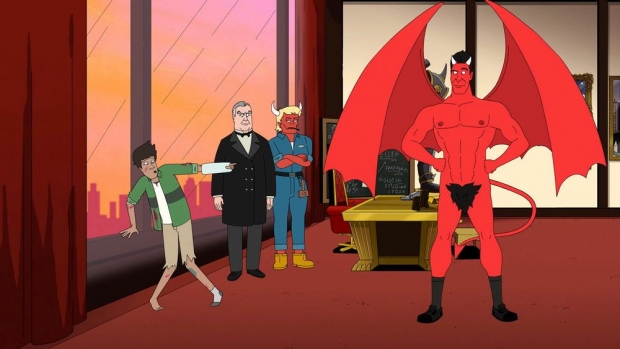 SYFY's new TZGZ original animated series, Devil May Care, is fiendishly funny. There, I said it.

In the show, a millennial named Beans (Asif Ali) finds himself in Hell with NO idea why. While meeting with the Devil (Alan Tudyk) upon his arrival, they quickly figure out that Beans’ job from his earthly days translates perfectly into his new subterranean digs; just like that, Beans becomes the Devil’s newest Social Media Manager, since online buzz is exactly what Hell’s been missing. The two form the most unlikely friendship, and together, while juggling Devil’s staff and family, they work diligently to get Hell trending.

In a recent interview, Goldstein talked to AWN about tough creative lessons learned in the Robot Chicken writers’ room, how the seemingly mundane can be funny if it has purpose, what he finds so funny about Hell, and how critical it is to keep an audience engaged in their “short attention span theatre” world.

Dan Sarto: You cut your teeth as the long-time head writer and executive producer on Robot Chicken. That seems like an enjoyable gig.

Douglas Goldstein: It is. In the writers’ room at Robot Chicken, we have a great time, but the nature of the beast is that every writer in the writers’ room must come up with at least six or so sketch pitches a day, that we all review together at the end of the day and then tear to shreds. So even though we're having a great time, it usually ends in tears because we're all shooting down each other's ideas. The silver lining is it really trains you to come up with pitches that you can defend, that you think the greatest number of people in the room will enjoy. To up your game. As I wrote Devil May Care, I felt that pressure. I felt like there was a writers' room looking over my shoulder. And every time I heard them say, “That sucks!” I was like, “Oh, I guess maybe I should rewrite this.” So, it feels like spirits of the Robot Chicken writer's room kept going with me. DS: That sort of relentless approach to “thumbs up down” has probably given you a much better idea of not just what you think is good, but what ultimately will be good once animated and being watched on the small screen.

DG: I agree. It’s a lot of making sure that there's no dead space. One lesson that I've learned is, especially today, where it’s short attention span theater left and right, you can't let the audience look away for a second. That's why in Devil May Care we have stuff going on in the background, we have little Easter eggs… we try to have the voice actors be cool and crazy, because, you know, I do it myself… you're on your phone while you're watching TV and your attention has a mind of its own. You've got to keep people hooked.

DS: You’ve got a great voice cast on the show. Every show creator I’ve talked to over the years speaks of how much they enjoy working with the voice talent.

DG: It's amazing. I have the most fun working with the voice actors because they really bring the characters to life. They're reading the script in front of you and you're like [regarding your characters], “There they are! There's President McKinley. How’s it going?” It's great to hear them read your lines. And at the same time, because a lot of the voice actors are reading this stuff for the first time as they're recording it, when you hear them laugh, you know it's genuine. In this business, people say, “Oh yeah, that was really funny.” And they say that the same way they say, “How you doing?” Hearing them laugh as they're recording their lines is a real treat. It makes me feel great.

DS: That spontaneity is hard to fake, certainly. So where did the idea for the show come from? DG: The original idea was a little different from what ended up on screen. At first, I thought it would be fun to parody all those old shows from the 80s like Knight Rider and The Equalizer, where they're just like, “Okay, who needs help today?” And that's the episode. I thought it'd be fun to parody that with the mechanism of summoning the devil for a favor. You've got the big pentagram on the floor, you’ve got the candles, you’ve got the ritual. I thought it'd be funny to have a show where each episode, somebody complains that there's a biker gang beating up their uncle, and he's just trying to run his cigarette store, can you please do something about that? And to be funny, if on earth, the devil didn't have any powers, and he keeps getting thrown through plate glass windows, and all the tropes of those old shows. That tickled me. When Amanda Miller at Psyop, who I’d been working with on commercials, asked if I had any ideas for a show, I brought that up. And she said, “That's pretty funny. It'll get really tiresome after three episodes. So where can we go with this?” And after talking it through with her, this is where we are today.

DG: We always seem to attach these really spiritual, thoughtful, insightful stories to explain why things happen when in reality, they happen because of the most mundane reasons you could possibly think of. Nothing's as special as what we assume it to be. And I thought the ultimate area where we must be doing that is religion.

We must be prescribing the most amazing fables, laws, and Holy texts about things that behind the curtain are not that big of a deal. And that got me thinking about Heaven and Hell. Why would God set this up? It seems really complicated. And then it occurred to me, if you're God, and you created the universe, and you’re living in Heaven and you want to hang out with things that you created for all eternity, you probably just want the coolest stuff. You don't want everything. So, anything that isn't perfect, is going to be like, I don't want that. So, Hell becomes this trash bin for everything God thinks is less than perfect. Everything from a mouth breather to someone who chews their food wrong. Anything. And then I thought, what would a crazy world like that look like? And that is kind of what this Hell in our show turned out to be. DS: There’s certainly no shortage of hellish social media topics. In fact, you could say every bit of it can be pretty hellish. How do you wade through all the possible funny ideas, whittling them down to what finally goes into an episode?

DG: The trick is that it's got to have an interesting story, or we've got to do something interesting with it. You can't just say, “Oh, look, um, Police Academy 7 is playing in Hell. Ha ha. Because it's bad. Right? It's bad. Ha ha.” That would bore the shit out of you. So, it's got to be something that either the viewer thinks Devil does something interesting with, or Beans is going to have an interesting reaction to. There's an episode where fidget spinners come to Hell and Beans is like, “Oh yeah, those were really popular once. And then we all got tired of them.” And then you see Devil, who's never seen one before, and has his own weird childlike innocence, sees this thing having amazing potential.

And that forms its own little story. He uses it for nothing it was actually intended for. He has his own ideas. So, everything is always there for a reason, or because it's got a fun story.
There are things in Hell that are really cool, but there's an angle to them, which is why they were sent to Hell. I tried to sell the thing with as many little jokes and references like that as possible. We'll see if people get it.

DS: Your show was produced during the pandemic. That must have presented some challenges for you and the production team.

DG: Everything was all done over Zoom. No one was in their office. Everyone at Titmouse ended up with their computer system at home. I met them physically once before the lockdown started. The good thing about this was how easy it was to get work done. I mean, you're typing, you're sending to a list of people and you know they're at their computers and they respond. And everything's great. The downside is that you're always at home. So, I'm sending out emails at 11:00 p.m. and I'm not expecting to get responses, but I do. It feels like we were running 24/7.

In potential future seasons after the lockdown is over, I’ll be eager to compare production experiences. Maybe it will be terrible. Maybe the lockdown is what we needed. DS: Any issues regarding you making fun of Heaven and Hell? Many people take them quite literally, from a religious standpoint. Does that give you pause at all?

DG: I find it really fascinating that over time, we get used to things that we once found offensive. Like if you go back 20, 30 years and you research what were the most offensive things of the day, they seem so innocuous nowadays. As one thing dies off, a new thing becomes offensive and you move on. There's been so much content like this on the air that no one is even going to notice or think about it. I mean, there's a prime time live-action TV show called Lucifer about the devil running a bar. I mean, I don't know how you top that.

I really think there are so many horrible things going on in the world today that the average person on the street has more important things to worry about than some cartoon on Saturdays at Midnight.