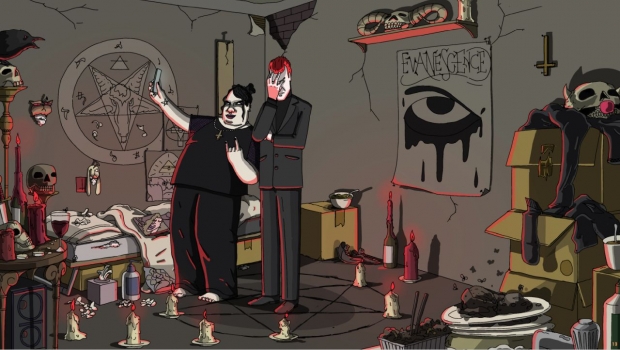 In the new series, the Devil (Alan Tudyk, SYFY’s Resident Alien) hires a social media coordinator (Asif Ali, BoJack Horseman) to rebrand Hell as the ultimate place to live, and the two form the most unlikely of friendships. The series also stars Fred Tatasciore, Pamela Adlon and Stephanie Beatriz in recurring roles.

Tudyk’s Devil is an Impulsive and excitable character that needs to impress and be liked and just wants everyone in there to be happy in his rebranded Hell. Ali’s Beans is inexperienced yet opinionated, with no idea why he’s in Hell as Devil’s social media coordinator. Adlon’s Regina is conflicted with old succubus ways and a new domestic position, with no sexual limits sexually, using that seductively to get what she needs from men. Tatasciore’s President McKinley is a man with no patience for fools; he’s the “Devil’s Advocate,” doing anything Devil needs to get done. And, as the Head Demon of Hell who’s helpful to those she likes and condescending to those she doesn’t, Beatriz’s Gloria is here to serve. Airing every Saturday at midnight-ish on SYFY, TZGZ is a 90-minute block of adult comedic, animated, genre-based programming of varying lengths. Since its 2019 debut, the block has grown +7% in the 18-49 demo vs prior year, and continues to bring younger viewers to the network.