Will Carsola and Dave Stewart’s ‘Mr. Pickles’ spin-off is back for Season 2, with a fresh set of charmingly disturbing hijinks and a bit of good old fashioned ‘roostering.’ 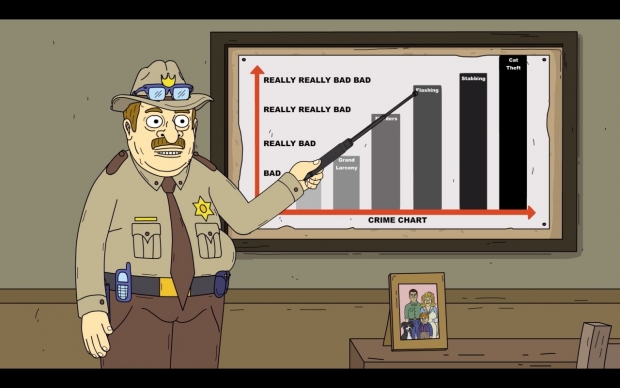 Will Carsola and Dave Stewart’s Momma Named Me Sheriff returns to Adult Swim February 14 with a brand-new set of Season 2 episodes. The raunchy animated adult comedy launched on the network as an unannounced episode of the creative duo’s canine serial killer opus, Mr. Pickles, airing right after that series’ finale on November 17, 2019. As a Mr. Pickles spin-off / sequel, the show takes place in the same old town… Old Town; the Season 2 storyline promises more of that “Grab your pudding cups and hold onto something” vibe so prominent in Season 1:

Check out the clip:

In a 2014 interview with Carsola and Stuart, AWN noted, “Dogs will be dogs. Even the cute and cuddly ones will eagerly snack in a cat box given the opportunity. But thanks to Will Carsola and Dave Stewart, we have a new animated series, Mr. Pickles, where our fine canine friend is actually a violent serial killer. Yes, my friends, the times, they are a changin’. Set in the old-fashioned town of Old Town (you read that right), the series centers on six-year-old Tommy Goodman, his family and his sweet and loveable border collie, Mr. Pickles, truly a boy’s best friend, but with a penchant for humping, mutilation and murder.” Like so many other shows, production moved remotely when the pandemic began. “At first, we thought it would only be two weeks of working from home, but then that turned into the rest of 2020 and beyond,” Carsola shares. “It was strange at first to be working with people only through a computer instead of in person. I even turned a small section of my house into a makeshift recording booth to record voices for the show. But ultimately, we adapted to the new process. During this period, I also had my first child, Apollo. So, one thing that was nice about working remotely was that I could be closer to my son. He must be confused though as to why I always go into one room and scream out strange voices for no apparent reason.”

Much like with Mr. Pickles, Carsola and Stewart pretty much have free reign creatively, with no pushback from the network regarding gags or subject matter. “Adult Swim always gives great notes,” Carsola says. “In the writer’s room, we’re always trying to do things with the characters and the show that we haven’t done before, to see what bigger and crazier things can be done within the parameters of the show / character, or to even break our own rules and see what happens. All of this is in the name of growing both the characters and the show. If we’re getting notes from the network, they’re usually giving us an extra push in this area; their notes are always smart and helpful.”

A show’s second season often affords writers new opportunities to explore and expand their characters more patiently. This was certainly the case for Momma Named Me Sheriff, as developing the main characters was the biggest creative challenge faced going into Season 2. According to Carsola, “We wanted to further grow the working relationship between Sheriff, Goodman, and Dispatch. We needed to do what we always do when we develop main characters and that is to really get inside their minds and find out what makes them tick. To do this, you have to explore every inch of what the characters both would and would not do and why. And in that ‘why,’ we might come up with a past for a character, or an inner desire / hint of a possible future. Through all of this, we find new storylines. And even though most will never show up on the screen, we’ve still explored them, and they’ll remain under the surface for the character, almost like giving an animated character a ‘soul.’ When that happens with characters, I can then begin to know what their every move would be in any storyline. So, with these already established and developed characters, the challenge was to further explore them in a new light, as a team.” Commenting on what audiences can look forward to in the new season, Carsola says, “Hmm… there are so many good moments this season! I’ll share these: Sheriff hires a cockroach as a Deputy, Goodman learns why it’s called ‘roostering’ when you stick your thumb up someone’s butt, we get to see where Dispatch lives, plus Sheriff has to kick a nasty addiction to chocolate pudding!”

An Interview with Priit Pärn
‘Baymax!’ Provides an Rx for Humor and Compassion
How Digital Domain Brought Photoreal Characters to Life in ‘The Quarry’
SCAD GamingFest: Building Shared Story Experiences with Diverse Character Design
Mission Critical: ‘Lightyear’s Journey to Infinity and Beyond
Putting the Fun in Dysfunction: The Non-Humanistic Therapy of ‘HouseBroken’
‘The Freak Brothers’: This is Your Humor on Drugs
END_OF_DOCUMENT_TOKEN_TO_BE_REPLACED