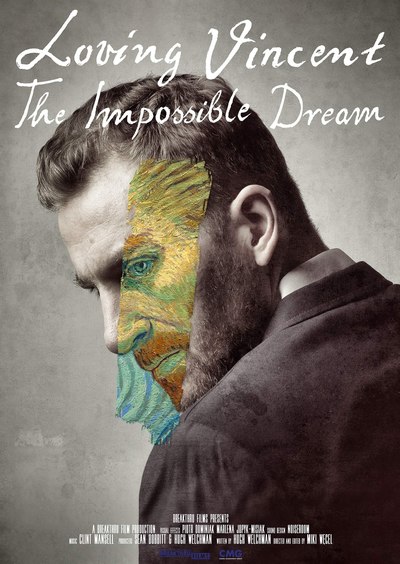 LOS ANGELES -- Good Deed Entertainment has acquired North American rights to the documentary about the making of the groundbreaking, Academy Award-nominated feature film, Loving Vincent. A plan for a special theatrical event release beginning in March 2019 will include double billings of the documentary and feature film. The documentary will be released digitally alongside a special edition Blu-ray release this summer.

Loving Vincent: The Impossible Dream, directed by Miki Wecel, documents and illustrates the filmmakers’ journey of creating the world’s first fully oil painted feature film while bringing the paintings of Vincent van Gogh to life. The documentary takes the audience through the origin story of the film’s concept, each step of the production process, and ultimately how the team innovated a new way to create animation and storytelling. Wecel mixed footage and interviews from production with post-Academy Award interviews, providing a balance between narration and more hand-held guerrilla filmmaking through the chaos that came with creating Loving Vincent.

Accompanied by 125 professional oil-painters who travelled from all across the world to the Loving Vincent studios in Poland and Greece, passionate co-directors Hugh Welchman and Dorota Kobiela created their vision of Loving Vincent. Kobiela’s idea sparked from wanting to create a short film out of paintings, but soon grew to a full feature film that was bigger and more challenging than her and her team could have imagined. The dream that seemed impossible in achieving gained momentum by receiving financial support, moral support, and enthusiastic encouragement from members of the public all over the world.

Not only does this documentary demonstrate the technology and artistic making of each frame, but it uncovers the risky challenges that resided with the filmmakers each step of their journey in recreating the work of one of the world’s greatest artists.

“Loving Vincent is a film that we hold close to our hearts. Now we are able to share the story of how Van Gogh’s extraordinary paintings came to life and the journey the filmmakers took. GDE can’t wait to share LOVING VINCENT: THE IMPOSSIBLE DREAM to audiences who love art, history, and achieving lifelong dreams,” GDE CEO Scott Donley commented.

“Everywhere we went with Loving Vincent -- at festivals, for cinema releases -- all over the world, people were fascinated by how we made the film. At our Q&A’s there were endless questions, and the events could go on for hours. People would stay long into the night to hear our stories about how we made the film. The Impossible Dream was created to satisfy the curiosity of our fans, Vincent van Gogh fans, and animation fans as to our long, and at times emotional, journey to make Loving Vincent,” Loving Vincent director Hugh Welchman said.

The deal was negotiated by GDE’s Kristin Harris and Brandon Hill with CMG representing the filmmakers.