The Arduous Madness of ‘Loving Vincent’

Dorota Kobiela and Hugh Welchman’s Oscar-nominated feature -- all 65,000 oil painted frames -- demonstrates the masochistic insanity that defines what is most precious, endearing and vital about animation. 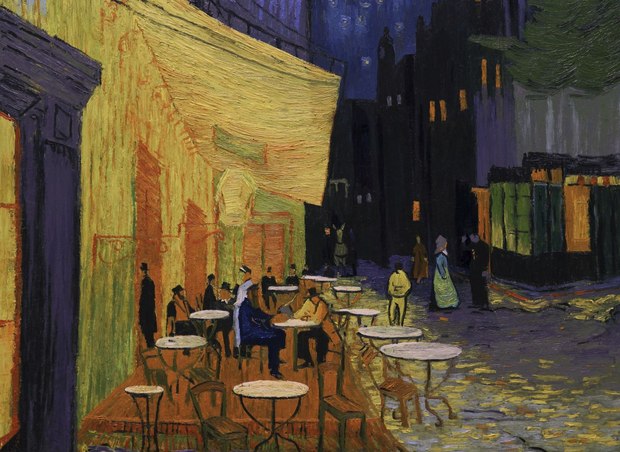 From exhaustive immersion to modest dabbling, anyone who has ever “lived the animation dream” can attest to the almost masochistic rigors of the medium. Long hours lead to long days lead to long years -- frame by frame, artists for generations have agonized over the minutest details of the monotonous and tedious process, often producing only a few usable minutes of film during that time. And then, we have Dorota Kobiela and Hugh Welchman, painters, animators, filmmakers and collaborators in the Oscar-nominated 94-minute Loving Vincent, the world’s first fully painted feature film. All 65,000 frames of it. While ambitious, determined and driven aptly describe their seven-year journey to make this unique and stunning film, daft, irrational and insane are equally, possibly even more accurate -- the sheer enormity of the visual complexities and production logistics alone should have been enough to halt the couple’s efforts at the very beginning. For Welchman, Oscar-winning producer of the 30-minute stop-motion short, Peter & the Wolf (2008), making another animated film wasn’t high on his bucket list. “After doing Peter & the Wolf, and The Magic Piano, I never wanted to do another stop-motion film,” he notes. “It was just too agonizing, too slow, and I really was looking to go into live-action.”

However, after getting drawn into the subject matter of Kobiela’s new project, an animated short called Loving Vincent, he knew his dreams of a live-action directing career would soon be taking a back seat. He explains, “My girlfriend at the time, who is now my wife, was developing this short film called Loving Vincent, which she wanted to paint entirely herself. It was going to be about Vincent van Gogh’s last day on the planet, based on his paintings and letters. Obviously, I’d heard of Vincent van Gogh. It’d be hard not to have heard of him. But, I didn’t really know much about him. We had all these books lying around our apartment and I started reading them and just became overwhelmed by the story and the passion of this man.”

As Welchman delved deeper into the film’s subject matter -- ultimately, over four years, viewing 400 van Gogh paintings at 19 museums in six countries -- he discovered, first hand, to his amazement, the extent of van Gogh’s incredible contemporary mystique that set him apart from other famous artists. “I was traveling around the world [at the time we were discussing the project] going to museums and at every museum, the van Gogh painting was always…there was a scrummage. There were just so many people around it when the rest of the museum could be empty,” the director describes.

“I started talking to Dorota,” Welchman continues. “‘You know, can we make this as a feature film?’ We’d both done a lot of animation and we’re like, ‘No, you can’t paint an entire film.’ I think the tipping point was one exhibition I went to in London, which was about his letters. Inside this exhibition, inside cases, you had old letters. People were queuing three and a half hours to get into this exhibition. I went home and said to Dorota, ‘We have to try and make this into a feature film because he’s a superstar.’ He’s like the Kurt Cobain of the 19th century, and he just gets more and more popular.”

Their idea to paint a feature film about van Gogh went from zany to mostly zany after the success of their initial tests. According to Welchman, “We started doing tests and the first results were not very encouraging. I mean, they looked gorgeous, but it was taking six hours, seven hours to do each frame of the film. If you do the math…that’s a lot of hours. But we weren’t disheartened because we really liked how it looked, which was the main thing. So, we did a concept trailer and people responded very well. The combination of Vincent’s popularity and the artistic approach we’d come up with, we thought, was enough. It gave us enough confidence to go ahead and paint a film.” While satisfied with their initial look and technique studies, they realized story development might even pose a greater challenge. Kobiela started writing in earnest in 2011, with Welchman joining her full-time shortly thereafter. He explains, “We started turning it into a feature film, really, in 2011. So, Dorota, for the second half of 2011, started writing the first draft of the script. We started working together on it, full-time, from 2012. We worked on it full-time for five years. We did nothing else in that time period, but the first two and a half years were really [spent] working on the script.”

Part of that challenge was finding the right selection of van Gogh paintings as well as how to display them within the film and weave them into a story -- ultimately, 94 paintings were featured in very close form to the original, with another 31 shown in various degrees of display. “We were developing the technique, and the infrastructure, because though people have been doing painting animation for 100 years, we were taking it to an industrial scale. We had to rethink the pipeline for painting animation. But that was a very small percentage of our work, compared to trying to come up with the script and trying to fit as many Vincent paintings into the film as we could without it distracting from the story,” Welchman adds.

One initial production challenge was finding the right painting technique. Kobiela initially planned to use paint on glass, but neither filmmaker was satisfied it successfully captured the look they wanted. “Because Dorota’s a fine art painter and has had lots of animation experience, initially, when it was a short film, she was going to paint it all herself, painting on glass, which is the traditional style,” Welchman notes. “But the main problem was, it just didn’t look enough like van Gogh. We started experimenting and, surprise, surprise, the thing that looked most like a van Gogh painting is oil paints on canvas. We tried acrylic, we tried glass, we tried a lot of techniques, but that was the way we could get the closest to the look [we wanted].” As part of the production, actors were shot in live-action, against greenscreen or on specially constructed sets that resembled van Gogh paintings. That footage became reference material for the animation. Ultimately, the animation had to translate the artists’ painting to a cinema screen, dealing with issues such as “invasions,” where a character painted in one style moves into a painting done in a different style. Or, for story purposes, when daytime paintings were turned into nighttime paintings, or Autumn images were changed to Summer.

Welchman says, “People will appreciate that we are re-imagining Vincent’s paintings. You cannot directly translate them onto film. It’s a different art form and, you know, he composed them as a single image, whereas once you start moving things over time, there are a lot of different considerations. But still, even though we’re re-imagining his paintings, we wanted people to really see which paintings we were re-imagining, and to really feel that they were inside Vincent’s world, inside his paintings.”

From there came the demanding process of finding oil painters to work on the film, a process that began in 2014. From 5,000 applicants, a pool of 700 were selected for three-day auditions that narrowed the group down to 150. Of those, 125 were selected, traveling from all over the world to work at one two studios setup in Poland and Greece. All told, 65,000 paintings were produced on approximately 2,000 canvasses, some which took as long as 10 days to paint for just a single second of film.

As part of the film’s development effort, Welchman’s studio, BreakThru Films, developed the Painting Animation Work Station (PAWS), 97 of which were used in the production. The PAWS system allowed consistency across the photographs taken of each painted frame, 24 high-resolution images taken of 12 frames making up a single second of film. Another challenge was finding the right “canvas size” or frame size to use -- it’s not like van Gogh used a consistent, film-friendly size and aspect ratio for all his paintings. Welchman describes, “The process we were doing was on canvas board 67 centimeters by 49 centimeters, which is Academy ratio. The reason we chose the Academy ratio was because [though] Vincent did his paintings in all different frame sizes, mostly he used a size 30, which is very similar to the old Hollywood Academy ratio, which is why we have an unusual ratio.”

Despite the painstakingly difficult production realities and league of shaking-head naysayers, Loving Vincent not only saw completion, but a tremendous festival award run leading up to an Oscar-nomination.

For Welchman, who swore laborious stop-motion animated films were a thing of his past, the seven-year project was more than worthwhile. He concludes, “I mean, after Peter & the Wolf and the Chopin films [including Chopin’s Drawings, Chopin to Infinity and Magic Piano], I was like, never again. But, I ended up doing something which was, in terms of animation, several times slower than puppet animation. But the time flew by because what I was seeing was something I’d never seen before. I’m completely obsessed by painting animation at the moment. Whether the world will let me make another painting animation feature film, I don’t know, but if they do, then I want to make a really scary horror film for adults, based on Goya or Caravaggio, with some really dark paintings.” Landscape Starry Night over the Rhone. Marguerite Gachet (voiced by Saoirse Ronan) at the piano. Vincent painting in the rain.