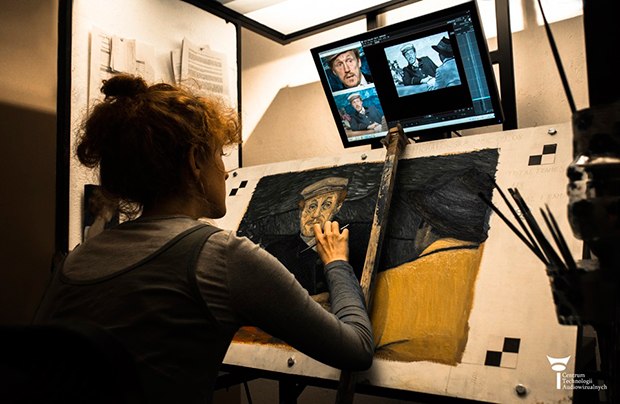 Loving Vincent, directed by Dorota Kobiela and Hugh Welchman, is the world's first painted feature animation. This masterpiece of Polish and British origin was created out of almost 65,000 oil paintings painted by 125 artists and has been nominated for best animated feature at the 90th Academy Awards.

Work performed at the Audiovisual Technology Center, known as CeTA, in Wrocław, Poland, supported all stages of the film’s production. In the CeTA film studio, the scenes with actors, recreating the scenes from van Gogh’s paintings, were shot, and the paintings for the film were conceived by the artists working at PAWS. The VFX CeTA Studio team also was engaged in the production by participating in research studies, previs and preparation of reference materials for more than 700 shots.

Research works were carried out in close cooperation with the producer, Breakthru Films, and the painters themselves. They consisted in developing methods and technologies allowing for full automation and simplification of painters’ work. The set of images that turned out to be the most convenient format for painting references included a black and white contoured version of moving images projected on canvas, as well as a color reference version to be viewed on monitors, put together in several successive animation frames. To automate these processes, several dedicated tools were developed.

The footage made in the film studio was edited in advance, so that the painters could receive ready-to-paint shots. The first stage was keying, followed by digital 2D and 3D production design, modeling, texturing, simulations, lighting effects and matte painting. The next step was tracking, in the scenes where camera moved, and compositing. Maya, After Effects, Nuke, Photoshop and PFtrack software were used for film editing.

The reference material was used by the painters to create the paintings that served as the base for the film frames, the total number of which was about 65,000.

The next step was editing the shots of paintings, which ultimately needed to be stabilized in the frame and aligned in terms of color balance. The discrepancies were particularly visible when combining sequences painted by several people simultaneously or at random intervals. Any reflections had to be wiped out from the shimmering, freshly applied paint. The objects that accidentally appeared in the frame needed to be removed as well.