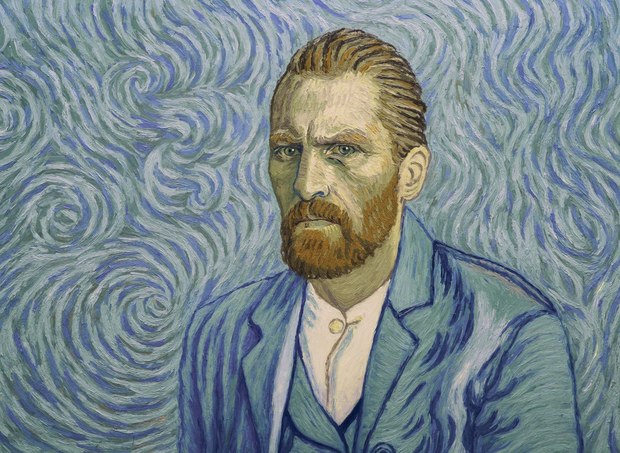 Sixty-five thousand oil paintings on canvas. Even though each frame of the 853 shots was consecutively photographed and overpainted to complete the shot sequence, this is still a daunting task. And painting them so they animate dramatically is an astounding achievement.

This is the sixth animated film and first feature for director Dorota Kobiela, who trained as a painter. Co-writer, co-director and producer Hugh Welchman is the founder of BreakThru Films and already an Oscar winner for the animated short Peter and the Wolf, which received the award in 2008. How on earth do you animate 65,000 oil paintings? Curious about the production process, and the challenges that come with co-writing and co-directing a feature, I invited the painter half of the team, Dorota Kobiela, to exchange emails.

Wanting to set the stage for such an extraordinary task, I wondered which she fell in love with first: Van Gogh’s life and story, or his paintings? For many people the starting point for a narrative film is the story. But Van Gogh is such an iconic figure, his story and work have become deeply intertwined. And so it was for Kobiela as she set out to make the film.

“His letters and works were a constant presence in my life,” she wrote. (Like Van Gogh, Kobiela has struggled with depression.) “Vincent was one of the artists I focused on in my masters dissertation in my early twenties, and I would after that from time to time dip into my Vincent painting books and also to his letters. So when I decided that I wanted to combine my passion for film and for painting by painting a film, then Vincent soon came back into focus as a natural choice.”

Interestingly, Kobiela and Welchman co-wrote and co-directed the film. It’s unusual to find two people overlapping to such a degree on one project. How did they divide the responsibilities? and the work?

“We live together (we’re married) and when I was writing my first draft Hugh started reading all the Van Gogh books I had lying about the flat. We were discussing the script all hours of the day and night, and then we were writing together. At the same time we were working out the technical production line for the film, and this and the script work flowed into directing together. We did everything together through the story-boarding, animatic/previs, live-action shooting and the editing. Once we moved into the painting-animation stage then I was the main director for this. Hugh took responsibility for the sound and music, working on the sound in Warsaw and London. We were together again for the final months of painting animation, online editing and grading.”

Working so closely, I imagined colliding decisions and desires, and asked Kobiela how they worked around differences of opinion.

“Mainly the painters just studied the references on the monitor and then re-did it as a painting in the appropriate style. Once they had done the first frame then they had to stick to those brush-stroke choices for the whole shot, as they had to animate the brush-strokes frame by frame.”

“We got all our disagreements resolved during the script writing process!” she told me. “We had a lot of intense discussions, but we never got angry at each other. It was more we would get frustrated at how hard it is to write, especially when you have to (or have chosen to) tie yourself into certain very specific visuals and also you’ve committed to not contradicting history.”

“There was no inbetweening,” according to Kobiela. “It is easiest to compare our process to puppet stop-motion films, but instead of moving a puppet on a set frame by frame, we were moving oil-paint on a canvas frame by frame.”

Moving brush strokes around like this, however, produces a large amount of information for the viewer to process. It’s less of a problem when the film is seen from a distance (so a theatrical viewing is best), but on a smaller screen I found that the secondary actions generated an almost too busy surface.

Piotr Dominiak, Tomek Wochniak and Kobiela designed the three Painting Animation Work Stations they used to complete the film. Watching up close for a few scenes, I was intrigued by the placement of the brush strokes and wanted to know how the film was made technically. After all, matching oil paint on canvas to the live-action/green screen reference material could not have been a straightforward task. Not only that, Kobiela wanted every animated shot to be more intense in terms of performance than it had been in live action. “The painters mainly worked by studying the frames on a monitor, and then re-imagining this into Vincent’s style. Trying to achieve the perspectives in Vincent’s paintings gave us a lot of headaches. For each shot they had the live action material, and also the relevant Van Gogh painting at high resolution, and of course the shots previously done for a particular character or location.”

“We got all our disagreements resolved during the script writing process! We had a lot of intense discussions, but we never got angry at each other. It was more we would get frustrated at how hard it is to write, especially when you have chosen to tie yourself into certain very specific visuals and you’ve committed to not contradicting history.”

How was the live-action imagery projected onto cotton canvas?

“In terms of projection we had an overhead projector that could project the live-action image onto the canvas, but this wasn’t at a very good quality, so instead we mainly used this for checking the movement in outline: we did a contrasted black and white version of each shot for this purpose,” Kobiela states. “Mainly the painters just studied the references on the monitor and then re-did it as a painting in the appropriate style. Once they had done the first frame then they had to stick to those brush-stroke choices for the whole shot, as they had to animate the brush-strokes frame by frame. We used Dragon software to keep track of previous frames.”

Using Van Gogh’s style and materials, and even his own paintings, is a very compelling strategy. The famous works pop up throughout the film as key frames, generating a venerable “aha!” of familiar encounter. Did the self-imposed obligation to integrate Van Gogh’s original paintings and style, and have them tightly woven into the plot, put a daunting restriction on the director’s expressivity?

“Yes, but it was a restriction we put upon ourselves, and sometimes restrictions force you to come up with solutions that you wouldn’t have found if you had a free hand,” Kobiela says. “I wouldn’t want to be as restricted as we were on this film again, but I was happy that we forced ourselves to stick closely to the originals for this film.” Given the amount of labor and the tight restrictions, would Kobiela make another film like this?

“Now that five months have passed since we finished ‘Loving Vincent’ I feel that I could make another painted feature film,” she shares. “But, as I said before, next time I’d want to be much freer in terms of story and imagery. Hugh and I wrote a treatment for doing a painted horror film based on the late paintings of Goya, and we got some development money for this. So once we have the Loving Vincent Exhibition up and running (we have an exhibition opening in Noord Brabants Museum Holland in two weeks with 120 of our favorite paintings from the film plus exhibits explaining the making of the film, and the historical context of the story) and we finish our press/promotions work then we will start writing the script for this.”

Distributed by Good Deed Entertainment, Loving Vincent opened in New York City on September 22 and in Los Angeles on September 29, expanding to top regional markets throughout October and November. You can find reviews of the film in almost every newspaper, so clearly people are intrigued. And it won Audience Award at a number of festivals, including Annecy. It may well make the Oscar list. It’s well worth seeing -- track the theatrical release details for your city and country on the film’s website. Want to dig deeper into the life and work of Van Gogh? Have a look at these excellent books:

Irving Stone edited the most famous edition of the letters in 1934 and it’s still in print:

The Van Gogh Museum brought out a six-volume edition of Van Gogh’s complete letters (not just the letters to his brother Theo) in 2009. They also produced a selection in a single volume: