Exclusive making-of presentations of three animated features and one Virtual Reality film will be held for ‘Loving Vincent,’ ‘Have a Nice Day,’ ‘Zombillenium’ and ‘Nothing Happens.’ 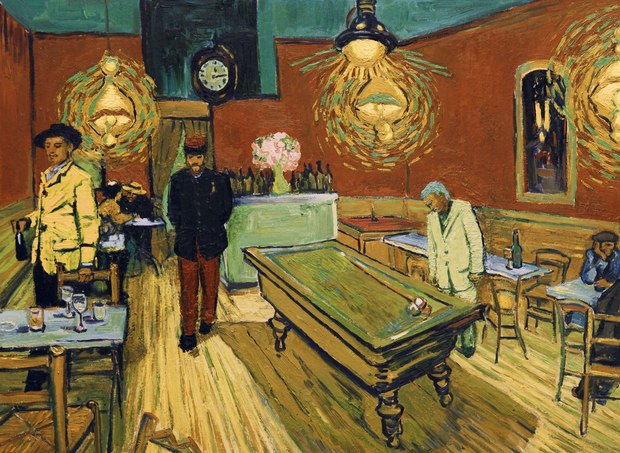 The British-Polish co-production Loving Vincent by Dorota Kobiela and Hugh Welchman will open the international festival for animation film FANTOCHE in Baden, Switzerland on September 5th. One-hundred-twenty-five professionals from Poland and Greece painted by hand a complete art work on Vincent van Gogh’s life with more than 65,000 pictures.

Another highlight for the community is Zombillenium from France. Arthur de Pins’s first feature film is based on the comic books of the same name and is a fast-paced story with atypical heroes.

Independent animation films from China are rare -- the Noir gangster thriller on corruption, Have a Nice Day, is already the second of the director Liu Jian. The festival presents 17 feature film premieres with four making-of- presentations by filmmakers.

Exclusive making-of presentations of three feature films and one virtual reality film will be held by the directors or the producer. Not only these talks are unique -- some feature films are not planned for Swiss cinema release and can therefore only be seen at the festival.

France in summer 1891. Armand is given a letter by his father, postman Joseph Roulin, and told to hand-deliver it in Paris. The letter is addressed to Theo van Gogh, the brother of his father’s friend Vincent. Armand is none too pleased with the mission, for he is embarrassed by his father’s associations with Vincent -- a foreign painter who cut off his ear and was committed to the local asylum. Nevertheless, he resigns himself to father’s wish and embarks on his journey. Although his search for Theo fails, Armand’s curiosity and admiration for the artist increases from day to day.

The British-Polish coproduction by Dorota Kobiela and Hugh Welchman transforms Vincent van Gogh’s artworks into intoxicating scenes and illuminates the tragic events surrounding his death. Loving Vincent received standing ovations and was honored with the Audience Award in Annecy. Loving Vincent opens the Fantoche Festival in Baden on September 5th. On September 7th, co-director Hugh Welchman will give exclusive insights into the extremely complex film production.

Dorota Kobiela and a team of European artists developed a total of 377 base images, inspired by 94 original paintings by Vincent van Gogh. Stylistic elements and parts of another 31 paintings by van Gogh were integrated into the base images. Subsequently, life action shootings with actors began to bring to life the scenes based on the reference images. One hundred twenty-five artists from all over Europe painted the live-action footage in oil on canvas by means of adapted rotoscoping and photographed each individual frame with a digital camera. This exceedingly time-consuming process resulted in more than 65,000 hand-painted frames, whose light temperature and vividness were carefully synchronized in postproduction to ensure ultimate visual continuity (English with German translation).

Who would have thought that the living dead work in the Zombillenium theme park? Zombies, werewolves and other demons have the blues, for they are sick and tired of having to entertain spend-happy humans under such miserable working conditions. One day Hector, the pernickety safety inspector, visits the theme park and becomes suspicious. There is nothing else the director can do but bite him, thereby damning him to cooperate. Hector frantically attempts to escape to see his little daughter Lucie again, but his metamorphosis into a demon proceeds rapidly. And as if these weren’t already enough problems, the devil himself threatens to close the theme park if it continues to operate at a loss! Zombillenium was finally created in cooperation with the co-director Alexis Ducord. The film opened this year’s festival in Annecy.

After three volumes of the comic series, illustrator and animation director Arthur de Pins reworked Zombillenium into a feature film. Although the process of adapting a book for the silver screen is challenging in terms of story, visuals and technique, he embraced the challenge with friend and co- director Alexis Ducord. They will present their work on September 6th at 16:15. The directors chose 3D with 2D backgrounds and remain close to the original drawing style. Fans of his graphic art and animation films are really looking forward to this film full of inventive creatures that spark the imagination. After worldwide online and festival successes for The Crab revolution and the student short Geraldine, this co-direction adventure recently opened the Annecy festival. (English with German translation).

Have a Nice Day

Independent feature animation in China is not common. Have a Nice Day, a noir gangster thriller full of corruption is, however, the second feature animation by director Liu Jian. The contemporary animation studio is compact and fully mobile by means of a laptop, opening up endless possibilities for individual voices east and west. In presence of producer Yang Cheng (English with German translation).

Everybody has a dream deep in their hearts. But where do we find the money to make these dreams a reality? The star of this black gangster comedy from China is a bag of money. As it changes hands between people from different walks of life during its bloody journey, the bag reveals desires, aspirations and deepest, darkest fears.

With the Virtual Reality experience Nothing Happens, Michelle and Uri Kranot develop new directions and explore further steps in the realm of participatory visual art. Through multiple perspectives VR has the possibility to turn the audience into actual participants in the experience: We want the audience to become active participants in the scene – but also part of the passive audience. They alternate narrative and perspective based on player behavior to provide a unique experience for every participant. (English with German translation).

In this Corner of the World – Sunao Katabuchi, JP 2016, 128’, JAP/d/e, 12+
This award-winning animated film tells the story of Suzu, whose life is shaped by the consequences of war in Hiroshima. The young woman meets the harshness of everyday life with charm and humour, with Suzu’s creative view of the world offering an exhilarating contrast to the pervasive suffering of war.

Ethel & Ernest – Roger Mainwood, GB/LU 2016, 94’, E/d, 10+
London, 1928: chambermaid Ethel is in love with Ernest, the milkman. They get married and have a wonderfully happy life in an era full of changes, encompassing everything from World War II to the first moon landing. A heart-warming film adaptation of the eponymous graphic novel, which is based on a true story.

Le Rand Méchant Renard – Patrick Imbert, Benjamin Renner, FR/BE 2017, F/e/D (eingesprochen via Kopfhörer), 6+
The latest work by Benjamin Renner, director of Ernest et Célestine, after the comic of the same name: these three amusing episodes in the day-to-day existence of a small and somewhat unusual farm will captivate children – and their parents are sure to be entertained too!

Haarig – Anka Schmid, CH 2017, 16+
Bold, tamed, sensuous and intimate – Anka Schmid uses a playful autobiographical approach to tell the  story of a human hair. A clever blend of film, archive footage and special effects offers a thrilling look at the hairy regions of the body in everyday life, in art, and as a symbol of rebellion.

Der wahre Oktober – Katrin Rothe, DE/CH 2017, 12+
The Russian Revolution as observed by the artists of Saint Petersburg: Katrin Rothe traces the course of the revolution using source material that had remained uncovered until now. Veering between a sense of euphoria and disappointment, a group of painters, poets and thinkers brought to life as stop- motion characters participate in salons and street riots.