‘The Peanuts Movie’ Arrives on Blu-ray

Everyone was wearing Snoopy T-shirts.

The folks at Blue Sky Studios had an excellent reason for their sartorial choices: The Peanuts Movie grossed a quarter of a billion dollars worldwide before its home video release, said release the reason we were invited to their Greenwich Connecticut studio in early March.

There’s no hint on the main road outside the generic suburban office complex that the only major NYC-area animation studio lies within. Once you leave the road and drive into the building’s parking lot however, there is indeed a sign letting you know you’ve come to the right place. On all the posters, in all the film’s advertising, in its trailer, the handwritten words “by Schulz,” lifted directly from the comic strip are just under its title. Unlike other studio adaptations of classics that take as much (or as little) of the source material they feel like but leave its soul behind, The Peanuts Movie was faithful to Charles “Sparky” Schulz’s monumental comic strip to the nth degree.

That fidelity might have something to do with the fact The Peanuts Movie’s script was written by Schulz’s son Craig and his son, Bryan. In other words, Sparky’s DNA is literally in the movie.

Impressed by director Steve Martino’s faithfulness adapting Ted Geisel’s Dr. Seuss classic Horton Hears a Who to the big screen, father and son Schulz (together with Bryan’s writing partner Cornelius Uliano) approached Fox Animation, script in hand. The company said yes without hesitation and Martino now had the opportunity to bring the work of a second American creative legend to the screen.

Charles Schulz is biologically embedded in the film in more ways than one. The creative team studied 50 years’ worth of Peanuts strips to capture the essence of Schulz’s work: the shape and texture of his pen line, the definitive look of each character right down to the exact curlicue of that strand of hair anointing Charlie Brown’s forehead… “The process was similar in one regard to the one I learned on Horton,” Martino told us. “You gotta do the research, get in there and study. We went to the Schulz Museum and Research Center in Santa Rosa, California. There’s a library on campus with a full collection of his work. We put on white gloves and I held the original artwork; we studied how he drew, how he put pen to paper.” 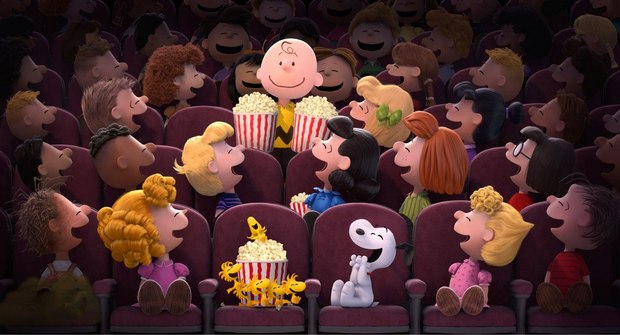 “We worked much more collaboratively on a day-to-day basis with Craig Schulz and Bryan. We spent a lot of time in Santa Rosa, we did our storyboarding there. We stayed very close in developing the story,” he continued. “When I worked with [Dr. Seuss’s widow] Audrey Geisel on Horton, we created an expanded storybook: we took the book’s illustrations and wherever we expanded the story we added new drawings in same style. When she was happy with the story we went and made the film and periodically showed her the work in progress, but she wasn’t as closely involved as having family members right with us as we made the movie.”

A full day was planned for us at Blue Sky, including visits to the animators and technical people who did the nuts-and-bolts work of creating the film. Speaking of nuts and bolts, some of the animators’ cubicles were sophisticated constructions, works of art in their own right. We passed by a thatched jungle hut, Snoopy’s doghouse, a TARDIS, a perfect reproduction of a Seussian Who house and a recreation of Family Guy’s Drunken Clam bar, complete with flashing neon sign. “The animators do it all out of their own pocket,” our escort told us. “You’ll hear hammering and sawing all weekend long, and by Monday morning it’s all cleaned up.” It was a look behind the scenes no Blu-ray supplemental features could approach. We learned about the varying focal lengths of virtual CGI lenses, color stylings and the pumped-up 3D effects used in Snoopy’s Flying Ace fantasy sequences vs. the more sedate ones depicting Charlie Brown and company’s day-to-day reality. Charles Schulz never had to worry about those in-between moments when he was drawing the strip, but some sophisticated cheats were necessary to transition between profile and full-face views of the Peanuts characters when they turned their heads. (A 360-degree rotation of an open-mouthed profile view of Snoopy was pure nightmare fuel.) Blurred frames that would destroy the hand-drawn quality of the characters were a no-no, we were told; a freeze frame of a dancing Snoopy revealed multiple feet to create the illusion of them in motion.

Near the end of the day Martino conducted a master class in how to draw Snoopy, which involved dividing the drawing surface into an uneven grid, then filling the rectangles with a series of overlapping circles, ovals and as Martino described them, Snoopy’s “bread loaf” feet. (Sparky can rest easy; none of us came close to doing the talented pooch justice; I signed mine “Not Schulz.”) But what of the heart of the film, good ol’ Charlie Brown himself? “Early on when we were beginning to storyboard Craig and Bryan’s script,” Martino remembers, “I told them you guys had captured his personality as though we were looking back at him through fifty years. A thematic heart presented itself into the film, an emotional spine where we wanted to show the qualities he’s always had: perseverance and kindness. He’s of a belief he’s not a winner, he’s not worthy, not good enough. The little red-haired girl is catalyst for that. He’s feeling inadequate, which is Charlie Brown’s defining trait. The conclusion of that thematic arc is that we used her to show those qualities are the qualities of a real winner. Charlie Brown was looking at it through the wrong filter. She never really did talk in the comic strip, but once that thematic spine presented itself she was the right voice to show Charlie Brown and the other kids that those are the qualities that really matter. To me that’s the most important part of the storytelling. We often lose sight of the smaller things: what you do for a friend, how you conduct yourself day to day that makes your life rich, that makes you a winner so to speak; it’s not getting on American Idol and winning the gold medal, it’s the bigger picture…I guess that was a long-winded answer.”

Long-winded perhaps, but most definitely a good one.