The Recipe for a Successful ‘Cake’ 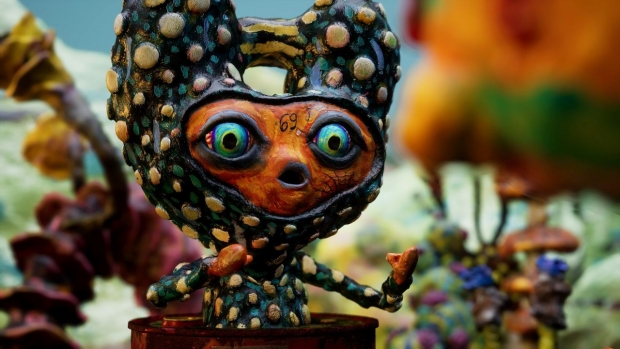 Now in the midst of its fifth season, FXX’s Cake – a half-hour weekly showcase of live-action and animated comedy shorts – continues to fulfill its mission to provide a meticulously curated feast of bite-sized audiovisual treats for the discriminating viewer.

From Reza Farazmand’s Poorly Drawn Lines, an animated short series about three twenty-something friends navigating early adulthood, to Augenblick Studios’ Swan Boy – based on Branson Reese’s comic of the same name, Dan Britt’s Beings, and Mike Anderson and Ryan Dickie’s Good Morning, Pickles!, each of Season 5’s 10 episodes offers something for everyone (or at least everyone who appreciates thought-provoking, wildly comic, NSFW entertainment).

Foremost among those responsible for all that meticulous curation is FX programming executive Kate Lambert, who, since 2016, has overseen the development of animated original series and short-form animated programs for FX Networks. Among the shows she has helped develop at FX are Archer, The Americans, Justified, American Horror Story, Louie, and Atlanta. Asked to explain exactly what Cake and shorts programming brings to the network, Lambert describes Cake as “a playground for short-form content that fits the FX fearless point of view.” “Perhaps some of these shorts become half-hour shows,” she continues. “And it’s a chance for us to develop relationships with talent.”

As for where and how they acquire content, Lambert says that there’s a lot of flexibility in the process and that they both license existing material, as well as create and commission original work.

“It depends on the season and needs of that season,” she explains. “The quarter-hour anchor show is always developed and produced by FX. Our aim is to develop as much original content as we can, but we often find ourselves needing short-form content in a certain tone or length to fill in the format of the half hour. We have lots of artists from whom we license back shorts, as well as commission new pieces. [California-based artist/director] Joe Bennett is a great example.”

Lambert says that in deciding from whom to commission works, they typically look at decks or one-sheets, plus a sample of the artist's work, to get a sense of tone. “We are looking for a point of view and strong sense of storytelling that fits the FX brand,” she clarifies. Expanding on this, she adds, “We tend to be looking for shorts in the sub-five-minute range, just based on the current format of Cake.  In addition to having a strong point of view, they are generally a bit ‘pacier.’ We also often look for pieces with characters or formats that could be built out beyond one short.  Our format makes it hard to utilize longer, more melancholy pieces, which would be better suited for a movie theater experience.”

If she had to name a few of the more successful shorts, those that have resonated the most with their audience, which would she choose?  “Dicktown is one that we are currently producing more of, as it found an audience in its first season,” she shares. “Poorly Drawn Lines and Swan Boy are other current programs we are excited about. The Joe Bennett Collection, as well as The Places Where We Live by Bernardo Britto, also worked well.”

As for what she personally likes most about animated shorts? “They are always surprising and original – be it visuals, be it tone, be it length or be it story.”

In addition to airing linearly on FXX, both the weekly showcase and individual programs stream via FX on Hulu. Cake is produced by FX Productions.  All NEW episodes are currently airing Thursdays at 10p ET/PT on FXX, streaming next day via FX on Hulu. Framestore Sets Sail on ‘1899’ with New Virtual Production Tools
Animated Characters: The Art of Babbitt – Part 1
Bruce Smith and Ralph Farquhar Talk ‘The Proud Family: Louder and Prouder’ Season 2
VFX is the ‘Thing’ for Tom Turnbull on Tim Burton’s ‘Wednesday’
We Need to Chat
Choc Chip Animation Riffs on Pop Culture in ‘The Art of Murder’
F is for Flake: The (Not So) Great Animation Robbery?
Re-VIEW: ‘Avatar: The Way of Water’ – A Miraculous Vision
END_OF_DOCUMENT_TOKEN_TO_BE_REPLACED