‘Demi’s Panic’ Encourages Moving Past PTSD… Even in a Pandemic

For Daniel and Lorena Hernández Leonard, braving the terrifying ordeal of taking their sick daughter to the hospital during the height of COVID-19 led to their first animated short about dealing with traumatic anxiety; legendary indie animator Bill Plympton directs, providing just the right pencil sketch style to illustrate such distress. 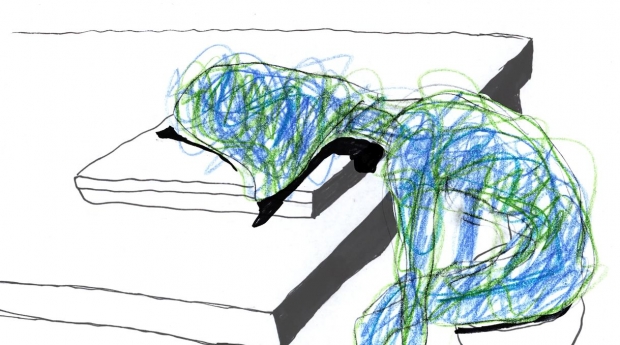 In the spring of 2020, writer, and producer Daniel (“Danny”) Leonard experienced anxiety for the first time, and what he describes as “the worst five days of my life.”

“Our youngest daughter got really sick,” he says. “She was two-years-old at the time. She had a terrible cough and when we heard her coughing in her crib in the middle of the night, it was pretty terrifying. She ended up having a high fever. She wouldn't eat, she wouldn't drink. When my wife Lorena brought her into the doctor, they would only let one person go with her. And when they brought my daughter in, it was under a full COVID protocol; hazmat suits, doctors, face shields, and HVAC systems. But they wouldn't test her because she was a baby.”

From the depths of a parent’s anguish came the idea for Demi’s Panic, Danny and his wife Lorena Hernández Leonard’s first animated short film, officially qualified for Oscar-consideration and the recent winner of the Best Animation award at the Big Apple Film Festival.

According to Danny, “I kept thinking, ‘What’s going to happen to her? Is our older daughter going to get sick? Are we going to get sick? What happens if we get sick?’ All this stuff was running through my head, and I experienced anxiety for the first time in my life. That’s a shocking experience if you have no familiarity with it. That was the genesis of the idea. Taking this aspect of the pandemic and this panic and making it visible. And I knew it had to be an animation to tell this story.”

Demi’s Panic is produced by the Leonards’ Rock Farm Productions, and animated and directed by legendary indie filmmaker Bill Plympton, known for his prolific library of hand-drawn films including Cheatin’ and Idiots and Angels (read Bill’s Idiots’ Diary posts on AWN). The 10-minute, 2D-animation follows the journey of a young woman named Demi, who experiences various waves of a pandemic and struggles to maintain emotional stability as her anxiety grows. Demi’s Panic just screened at Spark Animation and is showing at the Arlington International Film Festival and Napa Valley Film Festival through November 14 and Toronto Shorts International Film Festival November 10 through November 30.

“This has given us an opportunity to bring something to life that really enhances that physical experience of having anxiety,” says Lorena, who co-produced the film with her husband and Plympton.

“We've had some scares since then, but most people around the world have had those scares too,” adds Danny. “That was something that I wanted to explore through writing Demi’s Panic, this universal, invisible drama and anxiety that’s happening in our house and every house in the world.”

While there are snippets of small dialogue - where character Demi is talking on the phone or watching the news - Demi’s Panic is primarily a visual film rather than narrative, and Danny and Lorena both wanted to make sure that the illustrations powerfully represented the tangible feeling of anxiety and depression. Which is why Plympton was their first choice.

“It was a very steep learning curve, with it being our first animated film,” says Danny. “But we were able to get connected with Bill Plympton and what better hands could you be in?”

Lorena adds, “The simplicity of the actual illustrations enhances the feeling of anxiety that the protagonist is going through. And Bill just uses pencils, so it's very simple, but because he's bringing all those colors into a black and white world, as the viewer, you can really feel what is going through Demi.” While Demi’s Panic - animated in pencil sketches - begins as a crisp, clean world of black and white, as the pandemic begins to spread, Demi’s world is corrupted by color. Her character design, once simple and full of soft white space, increasingly fills with multi-colored, squiggly lines that begin at the heart on her I-heart-New-York pajama t-shirt and eventually fill her entire person.

“The way Dan wrote the story, he made it very visual,” says Plympton. “And rather than just a bunch of doctors and nurses talking, it was more of a story about spaces in this person's life where she goes through hell. So, the important thing was to show the panic in Demi’s life. So, I didn't want to make the character design before the film’s epidemic too busy or too detailed. I wanted to keep it very stylized. Because then, when she freaks out about this sickness, it’s a much different style. It's totally the opposite end of the artistic scale. Then it’s this craziness.”

Originally, Danny has planned for the anxiety to stay concentrated in Demi’s heart. But, with Danny’s approval, Plympton had that changed. “The whole body - the brain, the guts, even the toes - everything panics in a situation like that,” he says. “In one scene, Demi is looking at her laptop and she’s just heard that someone close to her has died. And her scribble body ends up being one simple, frail, little line. I wasn't sure whether that would lose the audience. But I think people got the symbolism really clearly, that this line was like Demi hanging on by just a thread because that’s what her life was down to.”

That scene is Lorena’s personal favorite.

“Because of that devastation she’s going through and that Bill illustrates, it feels like you're also leaving your body at that point as you watch it,” explains Lorena, who has quite a bit of experience with anxiety, not only from last years’ scare with her daughter, but from her own childhood. “I grew up in Colombia during the drug wars and those experiences caused a lot of anxiety,” she remembers. “I suffered with PTSD for a long time in my life. And watching Danny go through what he went through last year was very difficult. It's a very isolating experience. Despite being surrounded with people who love you, you still are very much alone in that experience. And not a lot of people talk about it. And not a lot of people know how to talk about it.”

And for Lorena and Danny, that’s what Demi’s Panic was and is for them; a way to talk about it.

“At first, it was just simply trying to work through these ideas that we were feeling in our household,” says Danny. “But writing can oftentimes be really helpful in terms of working through stuff. This story is not really about redemption. It’s about the reality of life in those difficult moments, those anxiety-inducing moments, all mixed together with moments of joy and happiness. That’s reality, and it was important to keep that balance in the film.”

For Plympton, whose work usually tilts towards the side of comedy, working on Demi’s Panic was his own unique experience.

“This is the first film I've ever done that’s totally serious,” says Plympton. “I don’t think there's a single joke in the whole film and that's not what I normally do. I like to make people laugh. But I just felt that this topic was so important. I don't think since the AIDS epidemic we've had such a serious national depression and fear of relating to other people. I think it's really the story of national trauma, how we deal with danger, and how we survive it.” Though the film’s ending isn’t exactly a happy one, but rather a warning not to forget the thing that caused such panic, the ultimate goal of the film is to promote, as Lorena says, “post-traumatic growth.”

“In positive psychology, this is basically the experience of going through a traumatic event, going through all the same symptoms - depression, anxiety, intense stress - but of the person's own doing and their own volition, they are able to get out of the circumstances and be better than they were before they faced the adversity,” explains Lorena. “It took me a lifetime to feel better about the adverse circumstances in my childhood. And it's been a really wonderful experience to see such growth in Danny through making this film, and hopefully our audiences benefit from this as well.”