For Augenblick Studios’ Aaron Augenblick, Branson Reese’s new series of animated shorts, about a twenty-something swan of low station and medium intelligence, is one of the funniest shows of his 20+ year career; Season 5 of the short film anthology premieres today on FXX. 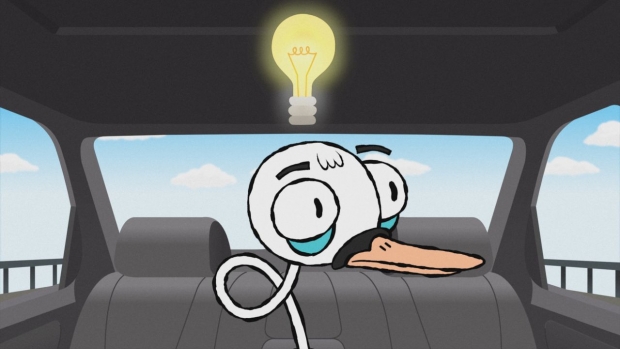 It might be the first time viewers have ever felt such sympathy for a swan. Albeit one of low station – in his finest moments - and medium intelligence.

Branson Reese’s Swan Boy comics have come to life with the help of Augenblick Studios in FXX’s fifth season of Cake, premiering today, September 30, with next day streaming via FX on Hulu. While Cake’s last four seasons have provided a much-needed platform for artistic, comedic, raw and thoughtful short-form stories - both live-action and animated - Season 5’s 10 episodes focus even more on animation.

And prominently featured this season is series of shorts featuring an anthropomorphic, 20-year-old swan with barely any idea what he’s doing.

“This is one of the funniest shows that we've ever made in our two decades of writing,” says Aaron Augenblick, founder and head of Augenblick Studios, which most recently produced the animation on Adult Swim’s just-launched animated comedy, Teenage Euthanasia. “But I also think there's a core of real characters and emotions in Swan Boy. When you’re in your 20s, you’re at this stage where you’re like, ‘Okay, I'm not a kid anymore. And I'm expected to be an adult. But I don't know what that means.’ So, I'm excited for people to see Swan Boy and experience that world that is very funny, and also true.” Swan Boy’s lead character is voiced by creator Reese himself; the series is executive produced by Drifters’ Alex Plapinger and Augenblick Studios with animation directed by Keith Stack, known for directing the TV mini-series Monologue, and animating on The Jellies!

“It was a lot of fun working on Swan Boy,” says Stack. “Animated sitcoms tend to be very dialogue-focused, and with Swan Boy, it’s got that very fun humor dialogue. But in addition to that, the humor seems to stem from the animation, which is really great to dive into.”

While the show’s main character gets into all kinds of trouble, ranging from the mundane to the fantastic and surreal, at its core, Swan Boy is about being, as Augenblick describes, “a lost soul in your 20s.” It’s likely a story familiar and relatable to many young adult viewers, and it called for some familiar animation. While Cake has excelled in visually experimental and unconventional animated storytelling, Swan Boy offers a classic 2D look amid wild 3D, CG, and stop-motion.

“We were attempting to primarily emulate the illustrations of Branson Reese,” says Stack. “We got to experiment with some cool, swirly outlines over everything and figure out how to best interpret his comics in an animated way, but still stay true to the webcomics.”

Augenblick adds, “Swan Boy is very cartoony. It’s like Looney Tunes on acid with funny cartoon characters that are punching each other in the face and exploding. I had a teacher [at School of Visual Arts] who told me that, ‘If you can't watch it with the sound off and laugh, then it's not a cartoon.’ And I will say Swan Boy is one of the shows that you could watch with the sound off and it’s probably just as funny.” But it’s not just about getting laughs. Augenblick explains that, at his studio, the story dictates the style. “One of the most important things, every time we start a new show, is to make sure we're servicing the storytelling in the best way that we can,” he shares. “Because, sometimes, animation can be very not funny. I've always had this theory that it’s why Warner Bros. has always been classically funnier than Disney, because they were paying more attention to making funny drawings than they were on making polished animation. No one does more beautiful animation better than Disney. But no one was funnier than Looney Tunes.”

And even though Swan Boy has moments of intense realism with a character of, on his best days, medium intelligence, the show creates a comical experience out of what in the real world might be quite tragic.

“When you see the juxtaposition of animation through time from Looney Tunes to Miyazaki, it makes you realize that animation is always about, ‘What's the most interesting thing that I can make in a small amount of time,’” says Augenblick. “Watching Cake is almost like watching that juxtaposition in real-time. You're seeing all of these really interesting, different approaches to animation and the power you get from that, which is why I’m excited to be introducing a wider audience to Branson Reese.”

He continues, “He's brilliant, and so funny and so clever and so smart. And his comics are so amazing. So, the opportunity to animate his comics was a really big deal for our studio and was very exciting for all of us in production.” Each of Season 5’s 10 episodes features Reza Farazmand’s Poorly Drawn Lines, an animated short series spotlighting the fantastical misadventures of Ernesto (Tony Revolori), Tanya (D’Arcy Carden) and Kevin (Ron Funches)—three twenty-something best friends navigating early adulthood in a world where the strange and surreal are an everyday thing. Based off the comic of the same name, Poorly Drawn Lines is produced by Floyd County Productions and Fish Ladder Productions.

Choc Chip Animation Riffs on Pop Culture in ‘The Art of Murder’
F is for Flake: The (Not So) Great Animation Robbery?
Re-VIEW: ‘Avatar: The Way of Water’ – A Miraculous Vision
‘Kung Fu Panda: The Dragon Knight’ Celebrates a Special Lunar New Year
END_OF_DOCUMENT_TOKEN_TO_BE_REPLACED