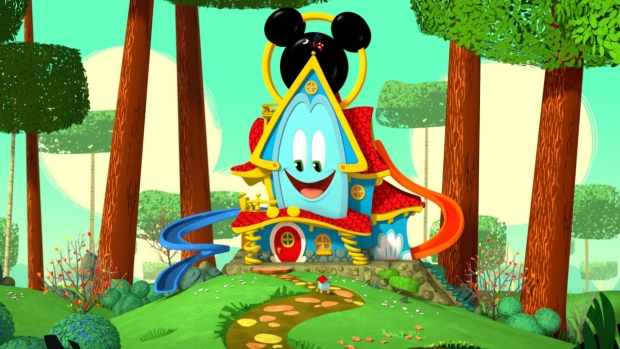 The series, produced by Disney Television Animation and Nelvana, introduces Mickey and the gang to an enchanted, talking playhouse named Funny who transports them to whimsical worlds, from the Kingdom of Majestica to Crayon World, where they embark on exciting adventures.

Take a quick behind the scenes peak:

Alan Bodner, known for his art direction on numerous Disney titles such as Kim Possible and Rapunzel’s Tangled Adventure, serves as art director for the CG series; he recently talked with AWN about how he was heavily influenced by the original live sets of The Mickey Mouse Club, along with classic Disneyland rides, and why he believes these famous characters have stood the test of time.

Victoria Davis: You have a long track record working with Disney on films like Cinderella II and shows like Rapunzel's Tangled Adventure, Phineas and Ferb and Kim Possible. What drew you to this series in particular?

Alan Bodner: After I was working on Tangled, Phil Weinstein asked me to take a look at this new show he was working on. I met him in the development process of Mickey Mouse Funhouse, and as we talked, we just seemed to be on the same page with how we wanted things to look.

VD: Having younger siblings, I was familiar with Roberts Gannaway’s 2006 Mickey Mouse Clubhouse, which ran for 10 years. How different did you want this new show to be?

AB: I think there is some similarity in that they were trying to create a more stylized world and we are certainly trying to do that as well. What sets us apart is that in our show, we really get to go to these wonderful locations via stairs to anywhere and that takes viewers into a real fantasy. I really love that aspect of the show. VD: It’s been five years since Mickey Mouse Clubhouse wrapped. What made the timing right to revisit these characters and bring this new, almost reimagined series to Disney Junior and Disney+?

AB: Being able to take a fresh look at these characters and their world was something that we all wanted to do. We were on the same floor when they were doing Mickey and the Roadster Racers and there was something in the air that was like, ‘Wouldn’t this be fun if it were really magical?’ You must admit, Mickey and Goofy, any of these characters, they just never go away. They're such important characters to the whole Disney world and people are still intrigued by them and you can tell all kinds of stories with them.

They’re part of all our childhoods - mine and even my mother’s as well. There are pictures of my mom sitting on a beach at four years old with a Mickey Mouse shirt on and now she's turning 90. These characters are historical, and I have to admit it was about more for me than just going onto a new series. I’m passionate about the history of these characters and being a part of something that’s just iconic.

VD: And the clubhouse, or the funhouse, is such a staple in Disney history as well. How does it feel, not only being a part of bringing these iconic characters into new stories, but also getting to add your own artistic take?

AB: Putting your own little mark on these characters is really an honor. And I don’t want to detract from what had been done before. I want to really pay homage to The Mickey Mouse Club from the 1950s, which is the one I was looking at because that was my childhood. That's where a lot of influences for the show are coming from, and from Disneyland itself and classic Disney animation, which makes it even more important that we get it right. VD: You’ve worked on a large portfolio of Disney 2D, but then you're also a fine artist. You have this colorful, pop surrealism and geometric style that was super prevalent in the Tangled series. How did you go about incorporating your own style and all these other influences into the series? Did the art direction develop over time, or did you have a clear picture in your head early on?

AB: In the initial discussions with Phil and Thomas Hart, we really loved this storybook quality and wanted to hone in on that. And looking at the styling of the sets on The Mickey Mouse Club, created by Bruce Bushman, they were just so fun and there was such a neat style to them that I put up a whole board of that stuff. So, we worked on creating a world that had a 2D look in CG with influence from these boards.

I actually referenced reels from ViewMaster because I have a whole collection of those from growing up. It’s a stereoscopic look but in these really animated worlds. And when you look through those binoculars, you're in this highly stylized world. I thought, ‘Wouldn't it be great if our show felt like a ViewMaster?’ And the team really liked that thought. That's kind of where our goal has been set and it's been a thrill.

VD: With shows like Mickey Mouse Clubhouse and Rolie Polie Olie, it seemed like kids CG shows were hyper-focused on series art based around one common shape. But things have changed so much since those early CG series. We’re able to mix so many different styles and ideas together now. There are things you can do with CG animation that you couldn't do even a decade ago.

AB: I think you're right. And I love that part of it where it’s like, ‘Ok, we've seen all that. Now let's really make the most of this art.’ Because we can get it in there now. Going down to Disneyland, going into the Toontown ride, and looking at Mickey’s and Minnie’s house, these things are fun shapes. And now that we’re able to, we’ve got to try to reinforce that style. VD: When it came to design ideas, how much did you visit live sets, like in Disneyland, during the storyboarding and brainstorming process?

AB: We had one trip down to Disneyland where we really looked at a lot of the buildings throughout the park, such as the Alice in Wonderland ride with the teacups. In one of our episodes, “Mickey the Brave!” if you look at that town, it really feels like you're in this wonderland-kind of place and a place you’re also familiar with.

However, during that retreat, we were very adamant that we didn’t want to copy things, but more pay homage to the studio. We even have Mickey Mouse shapes in the trees and the clouds in the show. We put that blueprint into everything and it’s all very rhythmic, just like the characters.

VD: As someone who looks at these characters not just on an emotional and nostalgic level, but on an artistic level, what has made this core group of iconic characters so timeless?

AB: There's a wholesomeness to these characters. They're not drawn to the grotesque or ugly. They’re sweet, they’re caring, and that emotion comes out in those characters. They're really about relationships, and people relate to that family aspect. They care about each other, they learn from each other, they get irritated with each other. But it's all for a greater good. I think, because of that, they’ve lasted, and they continue to last.

All our designers and background artists are big fans of these characters, just as I am, and that really does make a difference. We are building an ambitious show, but everybody's just having a really good time. VD: Having had such a wonderful time putting this series together and designing all the art, what are you most excited for people to take away when they watch the show?

AB: I hope they'll find it as exciting as we have while creating it. If the show is entertaining us, then it's bound to entertain the people watching it. I've always maintained that if I'm having a good time, and everybody's having a good time, this is going to look great. And that, oddly enough, has been proven over many shows that I've been a part of.

But there's something really special about this series, and to have this happen at this particular time in my life, is like returning full circle to the thing that made me want to get into animation in the first place. If you can really connect with the child inside you, which is what people are doing on this show, it's going to be a very magical event.

The Massive Creative Fellowship Behind ‘The Lord of the Rings: The Rings of Power’
‘The Dragon Prince’ Director Villads Spangsberg Talks Toonlines and Tough Challenges
Laurence Fishburne and Steve Loter Talk ‘Marvel’s Moon Girl and Devil Dinosaur’
Taking an Old-School VFX Approach in ‘All Quiet on the Western Front’
‘Natural Habitat Shorts’: Like ‘Ranger Rick,’ But for Adults
Framestore Sets Sail on ‘1899’ with New Virtual Production Tools
VFX is the ‘Thing’ for Tom Turnbull on Tim Burton’s ‘Wednesday’
We Need to Chat
END_OF_DOCUMENT_TOKEN_TO_BE_REPLACED