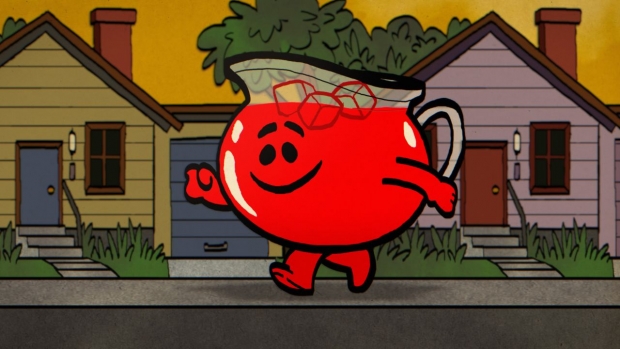 Notaro selected leading animation studio Six Point Harness to produce the animation for the special, building on their innovative work on such diverse film, TV, and digital projects as the Oscar-winning short Hair Love, the critically lauded series Lazor Wulf, Guava Island, and Waffles + Mochi with Michelle Obama. The studio’s creative director, Greg Franklin, directed the special, overseeing a team of more than 150 artists, animators and technicians who contributed to the special over the course of a year and a half production.

Animators began with an extraordinary amount of material. Rather than one single pre-recorded comedy show, Notaro offered Six Point Harness access to more than 48 hours’ worth of audio material, much of which had no visual counterpart. The audio was assembled from dozens of different shows; Notaro worked with the animation team to narrow it down to a single one-hour special.

AWN recently spoke to Franklin about his work on Tig Notaro: Drawn; he shared his insights on the production, including his collaboration with Notaro, style and material decision-making, and the challenges of staying funny for almost an entire animated hour. Dan Sarto: You did a great job on this project. You used a different animation and graphic style for each segment of Tig’s routine. What type of creative direction were you given to start the project?

Greg Franklin: We started with a very rough edit of the bits. Very long and very loose. The edit we had was created from multiple shows, all recorded at Largo [LA’s Café Largo] over a fairly long period of time. Each bit was one take from one show. Often, we had multiple shows to listen to and create the best version of the bits from. But the bits didn't really change.

We added a few, because with all these hours, there were some irresistible bits that my editor and I found, that we're so visual we're like, “Guys, can we do this one too? And this one?” My producers kept saying we can't add anymore. But some stuff was too good to leave out.

As far as what look went with what bit, I had two things going that guided me. One was what visual style would fit thematically with the content of the bit itself. For example, there’s a bit about getting wisdom teeth pulled, and the theme is that these sort of vapid and self-absorbed “beautiful people” let Tig down. So, that idea seemed to harken back to the magazine illustrations of the 60s and 70s, taking inspiration from expert illustrators, like Bob Peak, that kind of jet setting, glamorous style… and putting Tig smack into that world. Other bits were just pure comedy. So, we would go for something that was purely goofy or silly, like the old bat bit.

Originally, Tig’s idea for the ending was to do a kind of a funny riff on the Beatles’ Yellow Submarine. And we thought, if we're not able to clear the song, we don't really have a bit. So, we asked Tig what else did she have as a possible backup, because the ending should be a big finale. She told us of a bit with Dolly Parton, and we thought that's more than a backup… that should be our main plan. She asked me, dead on, what visual style would go with that. I thought about it for a second and said, “Pixar would be a funny thing to do because, you know, Pixar is so emotional and heartfelt, but there's kind of an Uncanny Valley that happens. You've got cartoon characters that have human skin, you know, they have all the pores, and I've always thought that was really visceral, like if there's real skin, which must mean there's real blood.

What would it look like if a character in Coco bled to death on screen? That's something I've always kind of wondered about. And she thought that was hilarious. So, we did our best with the limited budget to capture at least a parody of the Pixar pathos.

Everything kind of fit together in that way. It’s also important to note that it was vital that each new style we cut to looked nothing like the style that we just saw, and nothing like the style we were about to see. It's an hour-long show, so the pacing was really important, very different from the short spots and comedic pieces I’ve done and that you normally see being produced. DS: With cartoony, comedy-based animation, cramming jokes into every moment seems the norm now. It’s not hard to do, and many creators feel that's almost required. You didn’t do that on this special. On the contrary, you deftly handled Tig’s sometimes drawn-out style of comedy. Not really rapid-fire.

GF: I imagine it's the same for a comedian doing an hour long special versus doing the quote unquote “tight five on late night television.” The pace is different. And while our own impulse might be to cram as many visual jokes as we possibly can into every bit of the frame, Tig loves these kind of awkward pauses; we would revel in the awkward pauses, milking them for all their worth. Sometimes you need the discipline and confidence not to cram as many visual jokes in as possible.

Our timing was really based on the ebb and flow of Tig’s comic timing, and she’s the master. She's absolutely one of the funniest people alive, in my opinion, and we're not going to be funnier than her. Animators can sometimes be the least funny people in the world, you know? The worst thing we could do is put in a bunch of wacky animator jokes that would distract from her point of view. We're there to support the comedy, not dilute it. Obviously, there are a lot of visual bits that we add, but it's really important that they feel like a logical, organic extension of what she's talking about.

DS: What type of back and forth did you have with Tig during the production?

GF: She had a lot of confidence in us and didn’t micromanage the process whatsoever. She would tend to give one big note about how the bit was playing, that was usually really instructive. She would kind of adjust the support beam rather than mess around with the wallpaper.

It was during the pandemic, and we would have zoom meetings. She was great to work with. Sometimes she would want to punch up her own jokes that were already on tape. And there were a couple times when she would think of something that was so undeniably better in her own verbiage that we would record a pickup and kind of seamlessly weave it into the soundtrack. Her normal process would be to take two tapes, like what we were using for final audio, whittle them down to a perfect script, then go record that in front of an audience. So, for the special, she would ask us to take a word out of the middle of a sentence, which we did when possible. Or remove an “um,” things like that.

But she was more critical of her own stuff in some ways than with what we were doing. Sometimes, she would say things like, “Oh, I wouldn't wear those shoes.” She’s not super into current fashion, for example. And we have these young designers putting her in these cute little outfits and she's like, “No, no, no, no, I want to wear a dentist shirt. I want to wear Clark boots.” DS: Were you sending animatics back and forth to get feedback?

GF: Absolutely. We were sending designs, backgrounds, animatics back and forth. Once the designs and animatic were approved, we put our heads down and animated. We would present her with the first pass animation, do her notes, and then we're into the cut.

The pace of the show was most worrying to me, wondering if it was going exhaust an audience watching an entire 55 minutes of animated comedy. But it worked really well. Every time we would switch to a new bit, I would kind of freak out and go, “Okay, okay, okay, how's it going?” Then we would get into the new bit that we polished and spent so much time on, and I would go, “Ahh… Okay.” Then, that bit would end, we’d head to the next, and I would have a heart attack all over again.

DS: Did you produce the segments almost like episodes on a series? Or was it more linear?

GF: We produced it somewhat like a series in that all the bits were kind of staggered out in the production pipeline. At a certain point, we were animating all of them at the same time. It was sort of like producing 15 different shorts at once. We knew we were going to jump on the hardest ones first, which were the Van Halen bit, the Dolly Parton bit, and the Kool-Aid man, which was really long. It begins as a minute long joke about the Kool-Aid man, but she keeps digressing into all this crowd work and it's just this crazy thing. The original animatic was like 12 or 13 minutes. Crazy. I was like, “This is insane.” We definitely edited that down.

We started with those, then would start the next chunk of three, and kept doing that until we ran out of bits. So that's kind of like series production. DS: All told, how long were you on this project?

GF: We started in 2019. That was before we had a network. We pitched it I think the second to last week of February 2020 and were greenlit right away that week. And then the pandemic lockdown happened mid-March. I was just sitting at home, listening to the tapes over and over and over again for a few months, coming up with ideas, as all the deals were being finished. We really got started in July. We had a slow ramp up because we were starting off with conceptual designs, even though I had a pretty good idea by that point of what the styles were going to be, how we were going to tackle them, and who I wanted to work on them. We finished a month ago. So, it was a year of intense work and maybe half a year of ramping up.

DS: What were the most challenging parts of the production?

There's obviously a rich history of standup comedy and animation together, but there's never been anything like this where it's a full special without even a frame of anything real in it.

Also, I had never worked in a CG pipeline before, so that was a learning curve for me. I think it all turned out pretty well in the end. I’m super hooked on CG now, but I'm used to, “Just redraw it.” Still to this day, when I hear the CG folks say, “We can't do that. Now it's too late,” I’m like, “Come on, man. This is all just guys working on computers. Just redraw it.” It’s pretty funny.

I’m just pleased we got a chance to work on this show. This is Tig’s world, and she’s given us a chance to play in it. It’s been a great collaboration.