For executive producer Tom Rogers, his ‘egg-citing’ new series, premiering today, about three chicken siblings and their rescue dog mentor, is all about having fun and learning how to help your friends, neighbors, and family. 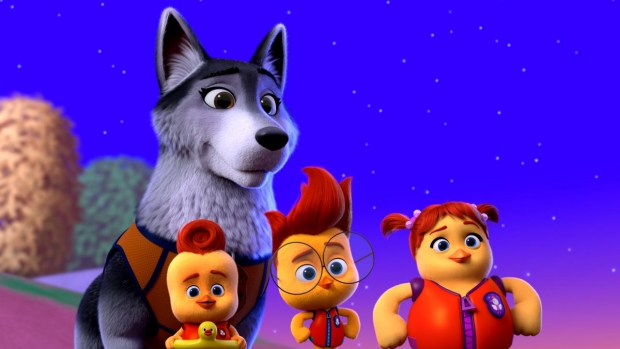 Premiering today - National Dance Like a Chicken Day - on Disney Junior and DisneyNOW is an “egg-citing” new animated comedy-adventure series, The Chicken Squad. Yes, had to say it, and not just because it was in the press brief. Based on the popular children’s books series by Doreen Cronin, the CG animated series follows a trio of chicken siblings - Coop, Sweetie, and Little Boo - and their retired search and rescue dog mentor, Captain Tully, who use teamwork and critical thinking skills to solve problems. A song-driven series, the show’s digital soundtrack, Disney Junior Music: The Chicken Squad, also drops today.

Each episode, comprised of two 11-minute stories, features the recurring "Chicken Charge" anthem that the chickens sing when they figure out a new mission, and at least one new original song that showcases a variety of musical styles ranging from pop and R&B to country, hip-hop, and electronica.

Whether rescuing a stranded puppy from a creek, helping a bird track down its missing food, or solving the mystery of how their mom's prized flowers got trampled, The Chicken Squad is always ready to lend a helping wing.

Check out the “Clubhouse Slide” clip from the premiere episode, "Chicken Squad to the Rescue / A Speedy Exit": For Rogers, the show first began to take shape as they adapted Cronin’s books. “These books are a delight,” the first-time showrunner says. “They were so much fun. I connected right away with these characters, with their silliness, the fun they have going on adventures, solving problems, and being great helpers in their neighborhoods. We worked with the author, Doreen Cronin, from the very beginning to identify what's the heart of these books that we make sure we’re always true to. And it's the stories of these characters who are silly and fun but learn to solve problems on their own with the help of a wise and funny mentor, Captain Tully, and who take great joy in being community helpers.”

Adapting 2D book illustrations to a 3D/CG world is never simple. For Rogers, part of the challenge was ensuring the show’s character designs not only looked good but reflected everyone’s personality. “For one thing, good CG character design literally has to look good in three dimensions,” he explains. “The pen and ink drawings in the books are delightful, but they're flat 2D. You have to have distinctive silhouettes. In the books, the character silhouettes are pretty similar. On screen, you need to be able to recognize the characters from a distance in a busy background, and a distinctive silhouette helps that happen. In addition, the designs really need to reflect the personalities of these characters. So, you know, for Coop, we have these big glasses you see immediately. It helps you recognize him as the one who's an inventor, who likes to invent tools and gadgets to help the squad. Sweetie is the athletic one. She's strong. She's also a scientist, we’ll come to discover, but you recognize right away she's the muscle in the group. And then Little Boo has that great big pompadour. He's all attitude and fun.” Rogers always planned to produce Chicken Squad in 3D/CG, rather than 2D, because it provided a better opportunity to show the world of the squad from their own level. “3D lets us get down into the world of the chickens,” he notes. “Our cameras are often placed at chicken height, low to the ground, so you see the world in this kind of exploded scale, where little things look big. A spare tire lying in the yard is actually like a fort you could climb into and hide when you're a little chicken. And that's often how I think kids feel in our big grown-up adult world. In a CG universe, you can really get down there and move the camera around, explore the world at chicken height, which is kind of like kid height.”

“It also gives you an opportunity for much more dynamic camera movement, much more dynamic shots,” he adds. “We have a lot of fun action in our show. In CG, you can really swing that camera around, move stuff around, have things whiz past the camera, which all bring more fun and excitement to the action sequences in our stories.”

Music plays a big part in Chicken Squad. Both Rogers and fellow Emmy Award winner Rachel Ruderman, the show’s co-producer and story editor, worked on Elena of Avalor and Sofia the First, two song-driven shows.  According to the showrunner, “We knew early on we wanted to have a song in every single episode. One would be a version of the ‘Chicken Charge,’ which is the ‘suit up’ song the chickens sing as they get ready to charge onto their mission. But we also wanted to have a story-driven song in each episode. We learned from Craig Gerber [creator and EP on both Elena of Avalor and Sofia the First] the importance of having those songs be integral to the storytelling. So, we wanted our writers to write the lyrics because we wanted the songs to help move the stories forward and really connect to the theme of the episode. From the beginning, it's always been the job of the writer of the episode to write lyrics for the song.”

The show’s music is written by Grammy Award winner Alex Geringas (Voltron: Legendary Defender) and Emmy Award-nominated Mike Himelstein (Mickey Mouse Clubhouse). “Working with Alex and Mike, we decided we didn’t want to be locked into any one sound for the show,” Rogers says. “So, our theme song and the ‘Chicken Charge’ are both action-adventure sounding songs, but the episodic songs are all over the map, from R&B to dancey pop, electronica, Divo, and country. We all love music and wanted to explore those genres because different episodes called for a different feel. It gives us the freedom to adapt the music to what we want to tell in that story that day.” Rogers goes on to describe how while dealing with COVID-19 proved to be the production’s biggest challenge, they were able to quickly adjust, sticking to their schedule while moving everyone to safe work-from-home setups. “Nobody saw the pandemic coming,” he shares. “All the other challenges were the ordinary ones: tell good stories, build a good team, find diverse talent, promote people up the ladder, normal stuff on a show. But it was completely abnormal that we would all have to go into ‘work at home’ status a little over a year ago. And you know, knock on wood, in the animation business, we’re incredibly fortunate to be able to move into work from home status almost seamlessly. I don't think we've had much of a hitch at all in our production schedule. So, I'm most proud of how flexible the entire team was in coming together to make this work because it was not simple, but they made it seem like it was.”

With The Chicken Squad finally premiering today on Disney Junior and DisneyNOW, Rogers is happy audiences will finally get a chance to tune in and have some fun, though there are some subtle, but important messages he wants to share as well. “These shows are really fun… and funny,” he says. “But then we sneak in some little messages along the way, and those messages are about things like how much joy you can get from helping others, how much fun it is to learn, how to solve your own problems, how gratifying it is to be a community helper, learning how to help your friends and neighbors, and be a contributor to your world.”

Taking an Old-School VFX Approach in ‘All Quiet on the Western Front’
‘Natural Habitat Shorts’: Like ‘Ranger Rick,’ But for Adults
Framestore Sets Sail on ‘1899’ with New Virtual Production Tools
Animated Characters: The Art of Babbitt – Part 1
Bruce Smith and Ralph Farquhar Talk ‘The Proud Family: Louder and Prouder’ Season 2
VFX is the ‘Thing’ for Tom Turnbull on Tim Burton’s ‘Wednesday’
We Need to Chat
F is for Flake: The (Not So) Great Animation Robbery?
END_OF_DOCUMENT_TOKEN_TO_BE_REPLACED