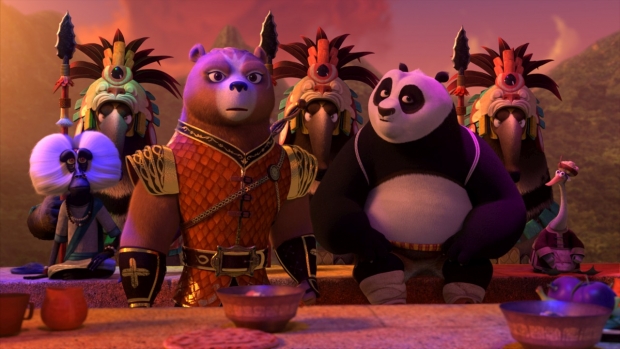 Find the legendary Tianshiang weapons and stop two villainous weasels once and for all or else be doomed to a world of… “baditude.” One kung-fu master, one chivalrous warrior, a master thief, and the world’s greatest dad (and noodle-maker) are back for a new season of Kung Fu Panda: The Dragon Knight, the latest installment of DreamWorks’ award-winning, almost 2-billion-dollar franchise.

And, for the first time ever, Po and his friends are leaving China.

The Dragon Knight Season 2, produced by DreamWorks Animation and Pearl Studios, releases on Netflix Thursday, January 12. The second season brings Po, Wandering Blade, Mr. Ping, and Rukhmini to India – later to Central America – in pursuit of weasel baddies Klaus and Veruca, who seek to gain weapons and an army for a diabolical plan of revenge.

The show’s four main heroes face danger at every turn on their journey, unravel the secrets surrounding Blade’s brother and his connection to the magical weapons, take a trip to England, and, in a Lunar New Year special, Po tells a story explaining Chinese New Year customs and traditions to elevate the crew’s spirits.

Teenage Mutant Ninja Turtles’ Peter Hastings and Blood of Zeus’ Shaunt Nigoghossian serve as executive producers on The Dragon Knight’s second season, and we had the unique pleasure to speak with Hastings about the world-class team who put together the show, the ins and outs of effects production, taking a mile even when given just an inch, and how Black and Po are very much the same characters. AWN: I know it's different on every show, and EPs come from different places in the grand scheme of things on series like this. So, tell me what are your overall roles and main responsibilities?

Peter Hastings: I came up as a writer and then moved into story editing, then into producing, and then running shows. Basically, I describe my job as being the “creative boss” of the show. So, I'm overseeing all creative aspects: breaking stories, directing the actors, and reviewing storyboards.

Of course, there are people who are doing all these tasks more deeply day-to-day with design reviews, discussions, approvals of all that, down through working with the composers, sound design, all the way through the mix. So, starting with the premise and then to the mix is really my area.

AWN: Soup to nuts as they say.

AWN: Looking back at Season 1 and what I've seen of Season 2, aside from the fact that DreamWorks has brought a level of not just quality animation but deep visual storytelling to episodic, you had your hands full this season. You’ve got Jack Black as Po, the gang goes outside of China and that means lots of new sets, new environments, new characters, and lots of action visual effects. That's a lot of animation to produce.

PH: My thing was to aim high and see how far we could get. And, honestly, I'm so pleased with how strong and how great the picture looks on this show. As you go through the [production] process, when you first watch the animation, there are no effects. It's not lit. It just looks like the work lights are on. And then we do a pass where we're bringing in all the effects, the atmospheric perspective, the lighting, maybe it's night, all these things. And this show has taken a bigger bump in that step than anything I've worked on.

I'm super pleased with this high-end aspect of what we've been able to put out, and what we can now do with CG. For example, certain things with water, that were so impossible 10 years ago, are not a big deal now. And when it comes to the talent, we’ve got people with 10 years more of experience. AWN: Knowing that your team can put together just about anything you could visualize, does that change the landscape of what you allow yourself to think up as far the story?

PH: Absolutely. And, again, we always shoot a little too far. It's better to ask forgiveness than permission. They'll come back and say, “This action sequence is just too intense. It's too crazy. There are too many characters.” But we never go back. If you say, “I want 10 characters,” and they say, ‘You can have two,’ it doesn't end up being two. It always ends up being six or something like that.

And it’s happened to me many times where I'm talking to someone who is responsible for producing something in CG and they say, “We're not going to be able to do that,” but then 10 days later they come back to me and say, “We figured out how to do that.” So, they accept the challenge a lot of times and then we see what we can get.

AWN: Was there anything appreciably different, better, or easier with regards to the design challenges and some of those production challenges for Season 2 than for the first season?

PH: The first season, you're just figuring out how far you can push those parameters. And we got pretty far in Season 1. But now we can really go for it in Season 2. I think the changes are probably more in how well you know your team and how well you know what everyone is capable of doing. And that way I know that, if I create this building design, I know that a certain person is capable of doing it because we've already been through something of that level. The challenges are more that we're continually bringing in new stuff. But the first season showed us we can continue to aim high.

AWN: The show boasts a considerable amount of VFX. How difficult was the effects work this season? How early did the team have to start? Do they have to do testing, or do you pretty much assume they'll nail whatever is needed?

PH: We definitely test it out. We give them an idea, because we don't necessarily know what they're capable of because you have a person who handles effects, and they live inside that world. We don’t. They know a whole lot more about it than any of us. So, it's more about expressing the scale we want, or how scary we want it, or how amazing it needs to be. And then usually they'll do a pass and it’ll look so cool.

Maybe lightning needs more jagged edges, or there should be more of a glow. But what I found is that our effects team was able to continually do more than we were expecting. And kudos to them for just accepting those challenges. They embrace it, enjoy it, and have fun with it and just really lift it up.

AWN: They plus it up.

PH: They plus it up, big time. AWN: I imagine that's pretty cool. You sit on this work for so long, and then you finally see the pass comes back that has the effects and lighting, and when they've taken it even farther than you expected, that must be rewarding.

PH: It's great. And I've certainly been in the other position where you're like, “Wow, none of that looks particularly good.” But not on this show. It's been continual surprises and really high quality all the way around.

AWN: What can you share and tease for us regarding what we can expect story-wise in the new season? And what were the main challenges for you with regards to the story? Because, yes, we have these beloved characters and, yes, you're taking them to new places. But audiences have certain expectations and I’m sure you want to make sure you continue capturing the character dynamics everyone loves.

PH: The main thing is you want to stick to your tone and be true to your characters so that they are all always behaving according to who they are. Po is a very different person than Wandering Blade. So, if you’re keeping them true to their motivations, then you can throw them anywhere, and that'll help your story come together. Like, how Po reacts to discovering a giant pile of food versus Wandering Blade. Those things stay the same.

And I was very happy with the conclusion of the first season because I felt that some things came to an end, but the door was open to a new adventure. And so, they're going to India to begin with, then they end up in what is now Central America in Tikal halfway through this series. But when you structure a story like this, there are some big things and there are some surprises that are going to happen along the way, which I'm not going to tell you. But we know we want to hit those things. And so, it's almost like you're on a journey yourself.

It’s like, ‘I know we need to get to that lighthouse at the top of that mountain. How are we going to get there?’ Those are the things we have to figure out. Those are the challenges. And you try to do that while staying true to your characters, to your tone, to the feel and vibe of your series. This show definitely gets more dramatic than previous Kung Fu Panda television series, and we're hoping to continue that trend and not say it’s a kid show or an adult show, but just for people. AWN: There's a lot of incredible talent that has really embraced and “owned” characters across all sorts of animated projects. Jack Black and Po have been an especially fantastic duo, so to speak. Having him involved is one of the central reasons why this show has been so good.

PH: Jack has been great from the get-go, and he's super fun to work with. We have a great time working together. It's part delivering what's written and then it's also playing around and messing with things. Jack is a champ of saying, “Let me do one more.” And he just, as he says, “puts some mustard on it.”

It's not just Jack playing that character. It's Jack's personality. Po is very much Jack and Jack is really Po. They're not that different. And he's established so many rhythms to Po that it's just really fun, like the mumbling and “That was awesome,” all these things that are natural to him. So, he's being authentic as the character. He's not playacting. He's just being the way that he is, and I think that comes across on screen and you really feel that.

AWN: Very much so. So, last thing. We're getting into the meaty part of the awards season, and there are all sorts of different folks looking at different aspects of these shows. What would you like people to focus on?

PH: I think the show is obviously funny. We've got Jack in it, but I think the dramatic throughlines we get into and some of the interpersonal relationship stuff we do is probably a little surprising. And I also think that the production design and the look of the show is fantastic as well. And it's a serialized story. It builds and builds as it goes along. Those are really the outstanding things about the show.