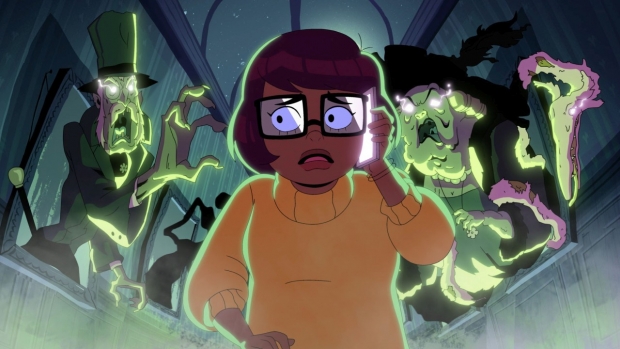 The glasses, ascot, green V-neck, and buffalo wings colored hair… all classic accoutrements of the teen mystery franchise’s most iconic cartoon characters. And while Mindy Kaling includes much familiar Scooby-Doo gang imagery in her first animated series, Velma, the comedy actress, screenwriter, and producer has also created a Mystery Inc. universe where “zoinks” and “jeepers” are hard drugs, Daphne and Velma are frenemies, Norville is a sword-enthusiast and anti-drug advocate, and Fred is a narcissist with “sickle cell for rich guys.”

Of course, Velma’s still a savage genius, Daphne and Fred are still a hot-ticket item, and Norville is as paranoid and obsessed with snacks as ever.

“They are still Velma and Norville and Fred and Daphne, but in a completely different lens,” says Sam Richardson, who voices Norville on Kaling’s series. “I think there'll be something fun for people who aren't familiar with the Scooby-Doo universe and for people who are big-time, longtime fans.”

Velma debuts with two episodes tomorrow, January 12 on HBO Max. The 10-episode adult animated comedy series, which focuses on the origin story of Velma Dinkley and the eventual formation of “the greatest team of mystery solvers ever,” continues with two new episodes weekly, leading up to the finale on Thursday, February 2. Created by Kaling, the Warner Bros. Animation show is executive produced by The Office’s Charlie Grady alongside Kaling, Howard Klein, and Sam Register. “It all stemmed from Mindy coming to me saying that she wanted to do something animated,” explains Grady, who is also a co-creator and showrunner with Kaling. “She said she’d always identified with Velma, the character who does all the work and gets very little credit for it. She asked if I’d want to do something like that with kind of a Riverdale spin.”

The genre-bending series actually makes a shout-out to Riverdale – and the popular Betty and Veronica kiss scene – in the opening scene of Velma’s first episode, which takes place in a girl’s locker room as a naked Daphne and her crew of naked hot friends debate pilot episodes’ shameless use of grotesque sex and nudity.

“It was actually part of the pitch, that we wanted it to be a love letter, not just to Scooby-Doo, but also to the current iteration of teen dramas which have really pushed the envelope and been at the forefront of diverse casting and telling new stories that have been taboo in the past,” notes Grady. “And not just on the screen, but behind the camera and in the writers' room. We wanted to take that and run with it. Which is why we wanted an animation design that would be funny but also support some real drama and emotion.” Constance Wu, who voices Daphne in the series, adds, “I grew up reading the ‘Archie’ and ‘Betty & Veronica’ comics. And Riverdale has a much darker sensibility to it, but still maintains a lot of the comic book. And that's what people are looking for, all the archetypical stories we tell, but in a different light than how we saw it when we were kids.”

Glenn Howerton, who voices for Fred on the show, acknowledges that it must have been a fine line to straddle, with Kaling and Grady crafting a series that is as unfiltered with its comedy as it is with its honest and sincere depiction of real teen struggles with personal identity and relationships.

“It was a tightrope walk, clearly,” Howerton says. “Satirizing horror films and teen horror films and teen dramas, it's a difficult thing to pull off as a writer, and to serialize that over the course of a whole season, my hat's off to those guys. The complete and total obliviousness of my character to his enormous entitlement and how offensive the things are that he's constantly saying to people… He's so mean, but at the same time, you also feel sorry for him.”

The actor adds, “Or I do, at least. Maybe that's my job as the actor playing the guy. But I do think that you’re supposed to hate him and also understand why he is the way he is and feel a little bad for him.” Wu was also excited to lend her voice to this new iteration of Daphne, a character that has been typically idolized for her looks but with whom there always seemed to be more under the perfectly polished surface.

“Typically, she's the hot girl, but she's not just a hot girl,” says Wu. “She has a sense of humor. She has an edge. She has a history that she's interested in finding out more about. She has so many other facets that made [voicing for her] a really unique opportunity. And the scripts are so funny.”

“They're trying to make something original, yet also deferential,” says Howerton. “It's such an iconic show, such an iconic universe, you don’t want to completely dismiss what the show was, and do something that's so different that it doesn't fit in with the universe at all. But I think the spirit of what it always was is still there. And now that HBO has this great track record with adult animated shows…”

Richardson continues, “There’s a place to receive it.”

Choc Chip Animation Riffs on Pop Culture in ‘The Art of Murder’
F is for Flake: The (Not So) Great Animation Robbery?
Re-VIEW: ‘Avatar: The Way of Water’ – A Miraculous Vision
‘Kung Fu Panda: The Dragon Knight’ Celebrates a Special Lunar New Year
END_OF_DOCUMENT_TOKEN_TO_BE_REPLACED