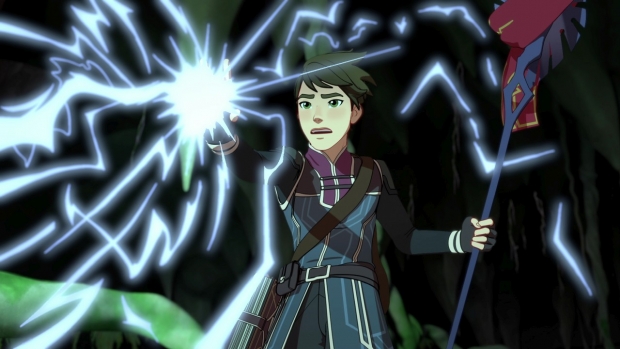 In 2019, The Dragon Prince fans were left with a massive cliffhanger: dark magic practitioner Viren is alive, brought back to life by his daughter Claudia and awaiting the emergence of a strange creature, created by main antagonist Aravos, wrapped in a menacing-looking cocoon.

But last week’s Netflix release of the series’ fourth season shows that Claudia’s betrayal and Viren’s resurrection are not the only jaw-dropping plot points in the new arc of The Dragon Prince. It’s two years after the events of the third season’s finale – after Moonshadow elf Rayla with Prince Callum and Prince Ezran returned Dragon Prince Zym to his mother – and Rayla has left now royal mage Callum to seek her revenge on a dark magic-wielding Claudia, Katolian army General Amaya and Sunfire elf Janai’s future marriage hangs in the balance due to racial conflict, and Aaravos isn’t simply taking on the form of a new creature.

He aims to permanently escape his prison and bring about the end of the world.

On top of it all, Ezran is facing a lot of tension from his people for his idealist beliefs, Viren is struggling with a bit of PTSD, and Soren finally gets the chance to confront Claudia.

“Getting the gang back together with all new problems and interesting, personal conflicts is super exciting,” says Justin Richmond, co-creator with Aaron Ehasz. “And then what I can't wait for is the setups that happen now for all the stuff that's coming in the next few seasons as well.” When The Dragon Prince series – produced by Wonderstorm – returned, it returned with a bang. Or, perhaps more appropriately, a proper “Yip-Yip.” Not just in its new season’s narrative, which holds some enjoyable Avatar: The Last Airbender Easter eggs, but with the promise of three additional new seasons and a video game in development. Richmond and Ehasz say it feels like a “dream come true and overwhelming nightmare all in one.”

“We set out wanting to build something that was really epic,” says Ehasz, known for serving as head writer on The Last Airbender. “We have an awesome team and a lot of great minds and artists coming together to build out a world and not only a story, but an experience in the game that we'll talk more about at some point in future. And it's this big ball of momentum now. There's a lot of energy to coordinate. But it's exciting to have all that energy and imagination and creativity together building the world of Xadia.”

The show’s new season also pays special attention to the concepts that Ehasz and Richmond were initially inspired by when brainstorming a show they could make together after leaving Riot Games: generational conflict and the moral, long-term differences between light and dark magic.

“Both of us were really interested in how generational conflict, in our real world, gets passed down, especially through younger generations,” says Ehasz. “You start off as a kid, and you're hopeful and you meet other kids who are different from yourself at preschool, but everybody's kind of the same. And then you start to understand some history. And things get a little more complicated, and you take on the burdens of some of these conflicts. We wanted to have this fantasy world offer an authentic way for a younger generation to face those conflicts and work to overcome them.”

He continues, “The other thing we talked about was magic. Specifically, if there's one kind of magic that's really hard and complicated, and you have to connect to it, and it takes nuance and harmony to understand it, and that became what is primal magic. Then there’s another kind of magic, where you grab something like a fire spider and you crush it in your hands and you can use it or consume it for something quick and that was dark magic, where you're taking something from somewhere else to get power fast, versus something that's long-term and sustainable.” Season 4’s deep-seated tension between the Sunfire elves and the humans, the humans and the dragons, and Earthblood elves and dragons touches on that generational conflict, while Claudia’s dark magic spell, which took two years to complete, can bring her father back from the dead for only 30 days, shows the cheap trick that comes with wielding such magic and how it all turns to dust in the end.

Though The Dragon Prince does touch on many of today’s real world hot-button themes, from racism and environmentalism to transgender identities, same-sex marriage, and being chastised for one’s faith, Ehasz and Richmond were careful to make sure the show didn’t turn into a political campaign.

“Sometimes, a delicate touch is all you need,” notes Richmond. “Less is oftentimes a lot more, depending on what you're trying to do.”

Ehasz adds, “We're not trying to say something about a specific issue in our world, so the difficulty can be playing through these stories, in a way that's honest to the characters and the fantasy world we've created, in a way that resonates with things people are thinking about and things that are relevant today, but that isn't preachy or has an agenda. That's not what we want. We want it to be more about thoughtfulness and about values and about people. It’s about our characters.” The character-driven aspect of The Dragon Prince is what first attracted Villads Spangsberg, a director on the show’s first three seasons and, who took on the role of executive producer for Season 4.

“You’re back in the universe with these characters and they’ve all grown, and we're setting up a lot of new arcs and a lot of old stakes are being dusted off,” says Spangsberg. “It gets quite serious. It gets emotional.”

Whereas a show like Monkie Kid, which Spangsberg executive produced, is a board-driven show, where half the script either got canned or reworked by the storyboard team, with The Dragon Prince, the script was the team’s Bible and character development was their law.

“We're big believers that characters feeling real and authentic in every way is the key to people wanting to be on this journey, wanting to connect to these people, sympathizing with their challenges, fearing their fears, wanting what they want,” says Ehasz. “That's the aspiration.”

And a big part of that is capturing all the subtle nuances of characters’ animated facial designs and movements. This was old hat by the time the team got to Season 4. But it wasn’t always easy.

“The subtle animation, especially during all our show’s ensemble scenes, is actually probably just as hard as some of the big action scenes,” says Spangsberg. “It was a challenge for our animators not to go overboard, especially since a lot of our Vancouver animators come from preschool shows where there's constant movement. So, we had to train those guys a little bit in the way of strong poses you can hold the longest time.” But even after the team had spent three seasons getting down the art of subtle acting, Season 4 changed the game by leaping two years into the future. So not only do the animators have the already difficult task of making every facial movement natural and believable, but they also had to make sure they were aging their characters’ faces and bodies properly.

“We spent a lot longer than any production would normally allow on aging our characters, but it's really important to get those details right,” explains Spangsberg. “We worked in detail on everything from the position of their ears to how the under chin works as you get older, how big the eyes get…”

He adds, “And Ezran has grown a lot taller, and we had a lot of discussion on that because I have two kids and the animators have kids, and we were all discussing how kids grow like, ‘Well, when my kid is 12 years old, he’s not going to be that tall.’ But Ezran’s father Harrow is a big dude. He's tall. So, Ezran’s got to get there. All-in-all, it’s been a pretty intense 14 months.”

But Ehasz and Richmond say the work has paid off, bringing to life old and new characters they hope fans will continue to grow attached to, and talk about years later like many still do with The Last Airbender. “The scene with Sokka and Zuko, with the line, ‘That's rough buddy,’ from Zuko gets quoted back to me quite a bit. It perfectly captures that balance of this epic, extreme fantasy story, and something like two people talking about love lost and past relationships and sympathizing with each other. That’s something we all get. It might not be as extreme as your ex becoming the moon. But we've all been through something where something went wrong for a reason that was outside of our control and that hurt and having that other person reflect that back to you helps a little bit. That's what friendship is.”

He continues, “And I’m so excited about the dynamic with Terry and Viren and Claudia. Seeing all those characters in the good and the bad and the relatable of their journey this season is really interesting. They’ve been inspiring to the writers who are making sure we're exploring and stretching the full range of these characters.”

The story arcs of Terry, Viren, Claudia, Callum, Ezran, Rayla, and everyone else in Season 4 are definitely kicked up a notch; the show promises epic storytelling in the seasons to follow which, luckily, Ehasz assures won’t include a three-year wait.

“It feels very good that the wait will not be as long,” he says. “I don't know exactly what it'll be. But the pacing will be much similar to the first three seasons. Just wait until you start to see what we're building towards and what the team has managed to do…we’re really proud of the work the team is doing, and it's going to be a great journey.”