The live-action / animated hybrid preschool series from DreamWorks Animation features flamboyant cats of every shape, color, size, and animation style, all joining Gabby on fun adventures in cleverly designed locations when she jumps into her dollhouse; the new season is now streaming on Netflix. 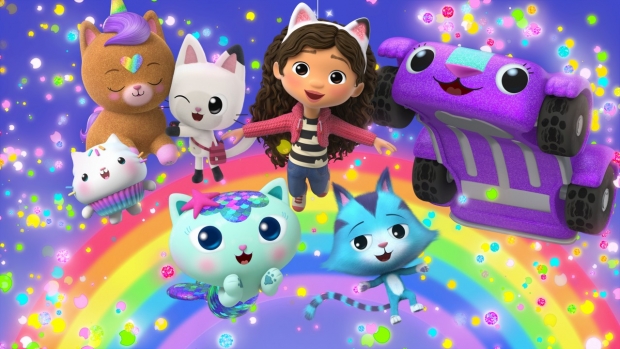 It’s time to “get tiny” with a new season of Gabby’s Dollhouse, now streaming on Netflix.

Like Blue’s Clues but with cats of every shape, size, color, texture, and animation style, DreamWorks Animation's Gabby’s Dollhouse is a live-action/animated/interactive preschool series. The show debuted in January 2021 and, almost two years later, is already on its sixth season.

From celebrated preschool creators and executive producers, Traci Paige Johnson (Blue's Clues, Daniel Tiger's Neighborhood) and Jennifer Twomey (Blue's Clues, Team Umizoomi), Gabby's Dollhouse always begins with Gabby (voiced and portrayed by Laila Lockhart Kraner) engaged in some sort of craft-making project in her room, leading to a box delivery surprise where she jumps into her bedroom’s cat dollhouse to share the surprise with her furry friends.

The dollhouse is a fantastical animated world full of flamboyant cats that take Gabby on a wide range of fun adventures. The show was nominated for a Kidscreen award in 2021; a series of show-themed toys was released for the 2021 holiday season.

Dragons: Rescue Riders’ David T. Chung serves as art director on the series. His team used Photoshop to design everything, along with Maya for the CG modeling and animation. We got the chance to speak with Chung about the show’s defiance of perfection, its unique animation, coming up with character designs via office supplies, and episodes he’s most excited for viewers to see. Victoria Davis: How did you get involved with the series? What made you want to be part of the show, from the story side to the art direction side?

David Chung: The fact that this was an original IP that didn't shy away from stepping out of the norm, nor was it afraid to challenge the status quo, was very appealing to me.

Also, ever since I was a kid, being able to hold and play with a character in toy form that was simultaneously on screen was one of my favorite joys. The concept of Gabby's Dollhouse was essentially that and more. I wanted to play with the toys that we were designing for a show, that would eventually have toys made from that show in real life!

DC: This was one of the best things about the show in my opinion. Since this was a mixed medium type of show, with live-action and animation, why couldn't we have different styles and methods of animation? Of course, we wanted to make sure everything had the same design language and signature “Gabby” look which maintained a very kid-friendly, inviting, and non-intimidating appeal, but we wanted to invite and encourage exploration and play so that the viewer could feel they too could draw or make the items in the show.

Kids mix and match their toys all the time. Uniformity isn’t at the top of their minds, nor is perfection. They're mainly invested in the story they want their toys to be involved with, and that's such an amazing way to exercise one’s imagination. VD: How did you decide what all these eclectic cat characters inside the dollhouse would look like?

DC: A lot of the visual choices we made were to have everything feel as tactile as possible. Our goal was to invite the audience to want to touch and feel everything. The characters were made to look like they were created in and with the materials of the rooms they belonged to. However, we didn’t just want the characters to simply fit into the dollhouse aesthetically, but to embody the same energy that their personalities projected.

VD: As you said, you wanted all these characters to look tactile and crafted, unique but belonging together. Were there any new tools developed to get the desired CG look for these characters that range in style? From a viewer standpoint, the animations looks like a combination of 2D and 3D, as if pages of a book have come to life.

DC: We did try out a lot of new methods for our show, one of which was trying to combine a mixture of 2D with 3D where we could. For example, we didn’t want just traditional modeling and rigging for the characters' faces, so we developed a way to rig up a 2D-style face on top of the 3D models to give them more of a sticker face look.

VD: What character art was the most fun for you personally to work on and oversee?

DC: Baby Box was among the most fun to create and oversee for me. The original design of Baby Box had to be scrapped at the last minute because the original character design was too close to another existing character, so in Gabby-fashion, we “crafted” Baby Box out of things that we found around the office and kitchen at the 11th hour. I am so glad that this is the way we went with her. I feel she’s a much more successful character design now. VD: There are also a lot of different environments featured in the series, from Kawaii kitchens to frosty North Poles and cat-themed gardens. Were some more challenging than others?

DC: The most challenging environments were the ones we had to redress or retroactively fit a new feature into an existing room in the dollhouse. Even though it doesn’t seem like much, a lot of planning has to go into breaking out something that already exists and making it fit for the new needs of the script.

VD: What were some new artistic feats you guys tackled this season that were unique compared to the previous five seasons?

DC: We were always wanting to push the limit of how things could be achieved in each episode. We ventured out of the traditional DreamWorks CG pipeline quite often, where a lot of us Leads had to deconstruct our usual method of working in order to create something new and special. It was very exhausting, but a thousand percent worth it and rewarding.

VD: Are there episodes from this upcoming season where you’re particularly excited to showcase the animation?

DC: I’m really excited about the Fairy Festival episode. That was incredibly challenging to create with a limited budget, but I loved how everything came together in the end. If you haven’t seen it yet, give it a go! VD: What have you enjoyed most about being the art director for Gabby’s Dollhouse?

DC: I’ve enjoyed working with our crew, especially the design team. We developed a really tight bond working on this show, and so much of their personalities and DNA can be seen embedded into the look of Gabby’s Dollhouse. I truly admire each and every one of them and have felt so lucky to be able to work alongside them.