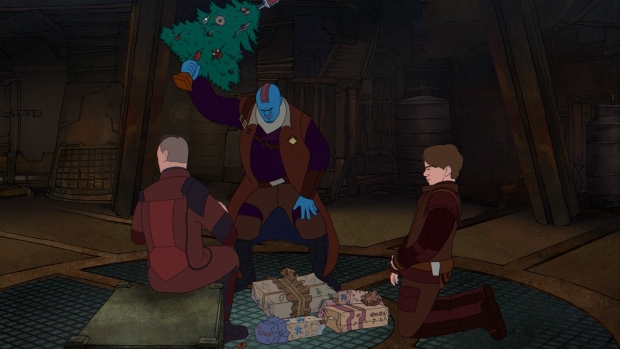 “Right from the start, James Gunn said he hoped to emulate the Ralph Bakshi style that was popular in the 1960s and ’70s, and there was no way to cheat it – it had to be hand-drawn rotoscoping,” explained Mac Whiting, lead animation supervisor on The Guardians of the Galaxy Holiday Special. “After seeing the animation test, Marvel arranged for us to be involved with the live-action shoot in Georgia. James and the Marvel team made the experience a real bucket-list item for any animator and fueled our desire to make the animation in this project as special as it deserved to be.”

Whiting and his Stoopid Buddy team used the live-action footage to draw each frame by hand – a task completed in just over two months.

Stoopid Buddy’s traditional hand-drawn animation is a growing niche for the studio known for its stop-motion animation work, including Marvel's M.O.D.O.K. and its Emmy Award-winning Robot Chicken series.

“James entrusted us with a tremendous vision,” noted Stoopid Buddy co-founder Matt Senreich. “When we produced an initial eight seconds of test footage with Michael Rooker as Yondu, we knew we could match that vision and, through animation, bring something entirely new to Guardians of the Galaxy. Stoopid Buddy is incredibly proud to be associated with it.” The studio produced the animation for the special in association with Victoria, Australia-based Studio Moshi, with a round-the-clock production pipeline to meet the delivery deadline.

“This has been one of the most exciting and creatively challenging projects I’ve ever been a part of, especially due to the demanding nature and high volume of hand-drawn animation, but the results are more than worth it,” added Whiting. “Fans are going to be watching this holiday special for many years to come, like so many of the specials we grew up with.”

The Guardians of the Galaxy Holiday Special is now streaming exclusively on Disney+.