Directed by Izzy Burton and adapted from a poem by Rachel Cladingbowl, the short covers one man’s journey through life. 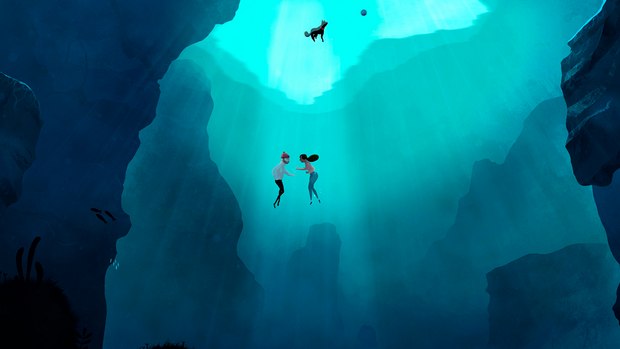 Blue Zoo's new animated short film 'Via' is directed by Izzy Burton and adapted from a poem by Rachel Cladingbowl.

The short is rich with Burton’s beautiful, trademark environments, which emanate and evolve to reflect the moment in the story. Inspired by a poem by Rachel Cladingbowl about life’s complex journey, the story follows the physical and metaphorical progress of one man’s life. We witness milestones -- love, life and death -- against the ever-changing backdrop that goes full-circle until his next chapter. Burton collaborated with the animators and artists at Blue Zoo to create the short, which evokes feeling and emotion through characters whose faces we never see in detail.

“When I feel overwhelmed with life, the world around me provides some type of healing,” says Burton. “I love to go stand by the river in London or at the end of my garden at my family home and take in how beautiful the world is and how lucky I am to be a part of it, and it truly makes me so happy.”

The colors are nuanced to tell the tale, with colors repeated in the most intimate scenes, a brightness when the narrator’s son is on screen, and sepia-tones as memories fade. Blue Zoo worked on the soundtrack with composer Vince Webb. "My work has always been described as whimsical and poetic, and I think that's why I ended up finding a poem to narrate the story,” says Burton. “I wanted my love for environment painting to assist the story, and see how we could tell an emotional tale using such small characters with no facial expressions. It was a great challenge and I hope we've managed to make a film that evokes some emotion in the viewer"

“For me, it is a poem about the complexities of the human journey; a path both rocky and smooth with unforeseen obstacles to overcome,” says Cladingbowl. “Indeed, some obstacles can seem so huge that we think we will never cope at all, yet somehow we can still come out the other side, smiling again.”