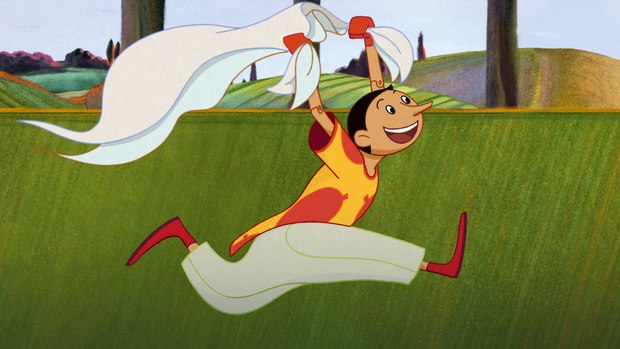 Lionsgate has debuted a brand-new trailer for the colorful family adventure Pinocchio, which arrives on DVD, Digital, and On Demand on April 10th. Reimagined for a new generation and bursting with songs, color, laughter, and thrills, this witty, wondrous version of the classic family adventure includes new chapters you’ve never imagined. Carved by a lonely woodcutter longing for a real son, playful Pinocchio is eager to do good and become human -- but he keeps getting distracted from his quest. Constantly captured by con men, creatures, and constables, he finds rescue courtesy of the helpful souls who recognize the wooden puppet’s kind heart.

Awarded the Dove Seal of Approval, this “wonderful family film” (The Dove Foundation) is a modern-day retelling of the timeless fable of a boy puppet and the lessons he learns from his misadventures. The film features the voice talents of YouTube sensation and musical artist Johnny Orlando, Ambyr Childers, and Jon Heder.

An adaptation of Italian author Carlo Collodi’s 1880 serialized account of the misadventures of the mischievous Pinocchio, the film is produced by Italy’s Cometa Film, in conjunction with Iris Productions (Luxembourg), Walking the Dog (Belgium), and 2d3D Animations (France). Pinocchio had its world premiere at the 2012 Venice Festival and went on to screen at Annecy 2013, where it was picked up by Grindstone Entertainment, with Lionsgate Home Entertainment handling release across all media platforms.

Available for the suggested retail price of $14.98, the Pinocchio DVD includes a never-before-seen featurette, “Bringing the Characters to Life: At the Recording Studio with Johnny Orlando, Jon Heder and Ambyr Childers.”