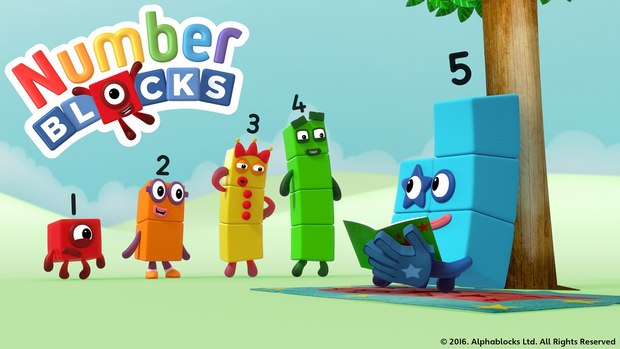 What happens when numbers come to life? Numberblocks, the brand new animated show that encourages children to think creatively about numbers, is coming to CBeebies to show you!

Numberblocks, the program where numbers come alive, is the brainchild of Joe Elliot and Blue Zoo Animation Studio, who together also made Alphablocks, the critically-acclaimed, BAFTA-nominated series, and is executive produced for the BBC by Catherine McAllister and Michael Towner. Alphablocks is the enormously popular TV show that has been on air over the past seven years on CBeebies, which teaches children how to read, with animated letter characters who hold hands to make words come magically to life.

Launching on CBeebies on Monday, January  23rd, the 30-episode series will air at 10:20am and 2:40pm weekdays, with each episode running for five minutes.

Numberblocks works on a similar premise, with a unique and memorable character for every number to give children a deep understanding of how numbers work. Numberblocks like to count things, discover patterns, sing songs, play games and go on adventures!

Numberblocks are made up of the counting blocks every child plays with - Numberblock One has one block, Numberblock Two has two blocks, and so on. When One jumps on top of Two, number magic happens and they turn into Three. And there’s lots of fun to be had when you can turn into your friends!

Numberblocks is made with the assistance of the National Centre for Excellence in Teaching of Mathematics. It’s full of playfully expressed core maths ideas that build into a solid foundation for children aged three to six.

“Following the popularity of Alphablocks, we are very excited to bring Numberblocks to CBeebies,” commented Oli Hyatt, founder of Blue Zoo Animation. “The show is about having as much fun as possible with numbers while revealing the patterns at play and building a deep understanding of how numbers work on a conceptual and practical level. We are confident that it will prove to be as popular as its counterpart with both children and parents alike.”

“Children (and adults) often struggle with maths because it starts to become much less visual and more about manipulating written numbers,” said Joe Elliot, Creator and Executive Producer of the show. “Numberblocks is different from any other numbers show because it keeps everything visual and really shows how numbers work. It breaks through in a way that no other numbers show has to give kids a great understanding of maths whilst having side-splitting fun. We’re looking forward to changing how children think about numbers.”

“Alphablocks is a much loved member of the CBeebies stable and I’m thrilled to have the opportunity to bring Numberblocks to the channel,” added Kay Benbow, commissioner at CBeebies. “I hope it will do for simple maths what Alphablocks did for phonics, making the subject fun and accessible for our littlest learners.”

Numberblocks is made and owned by Alphablocks Ltd, a joint venture between Joe Elliot and Blue Zoo Animation Studio. Blue Zoo is renowned for developing, creating and producing stylish animations, sold across the globe including; Alphablocks, Digby Dragon, Q Pootle 5, Olive the Ostrich, Go Jetters and Miffy.