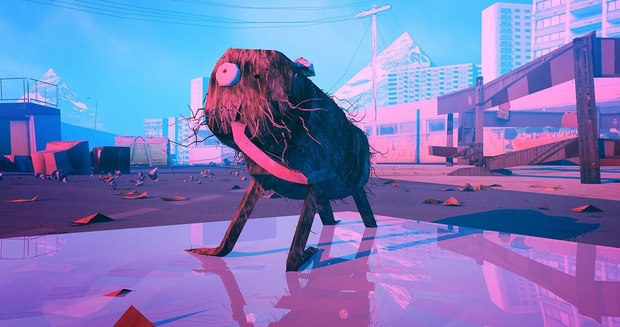 Fresh off of its festival run, independent animator Nikita Diakur’s short film Ugly has made its online debut as a Vimeo Staff Pick.

Billed as “a broken animation about kindness, respect and coexistence,” Ugly is an experimental animated short film about a Native American Chief and an Ugly Cat, who try to find peace in an evil and destructive neighborhood. The film is based on an anonymous story from the internet and features “ugly characters, faulty dynamic animation, a new age spiritual soundtrack and an over-the-top metaphysical storyline.”

With distinctive, glitched visuals in cyan and magenta, the film packs an emotion wallop:

Meet Redbear, a benevolent Native American Chief, who enjoys smoking at the crack of dawn and loves the earth and all its creatures despite their flaws. And meet Ugly, a resident tomcat who dreams about the wonders of the universe and has the purest heart, but struggles all his life to make friends simply because he is ugly. Facing a place where nothing is as solid as prejudice and intolerance, it is up to Redbear and Ugly to restore the balance.

Ugly is directed by Diakur and Redbear Easterman, and was made with the support of 206 backers on Kickstarter. The film has won numerous awards at international festivals, winning grand prizes at last year’s Ottawa Festival and the Bristol Encounters Fest, special mentions at Animafest Zagreb and Ars Electronica, and also screened at the Palm Springs Shorts Fest, Fredrikstad, the Edinburgh International Film Festival, Mexico’s Pixelatl festival and the Fantoche Festival, among many others.

Born in Russia, Diakur is based in Germany. The signature technique employed in his films is dynamic computer simulation, which embraces spontaneity, randomness and mistakes. He regularly gives talks and workshops at Festivals and Universities and has been artist in residence at Q21 in Vienna.

Watch Ugly in the player below, and learn more about Diakur’s process on his website at nikitadiakur.com: