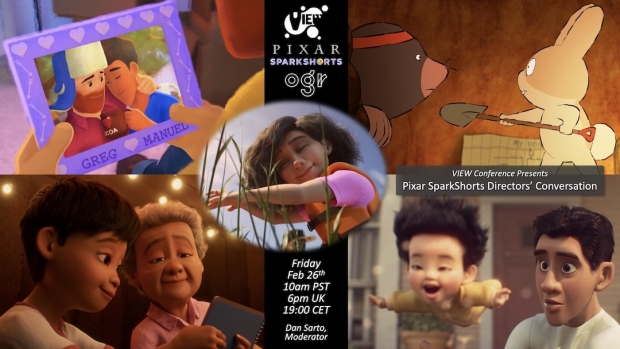 The View Conference continues its popular PreVIEW program, delivering inspiring events every month in 2021 leading up to the official October 17 launch of the conference. Focusing on Pixar’s SparkShorts program, the next free online session, which takes place on February 26, 2021 at 10:00 am PST / 6:00pm UK / 19:00 CET, brings together the directors of five films. The event will be moderated by AWN’s own publisher and editor in chief, Dan Sarto. The event is organized by VIEW Conference in partnership with OGR Torino and Pixar Animation Studios.

The first SparkShorts film, Burrow, uses 2D animation to tell the story of a young rabbit who enthusiastically pursues her dream to create the perfect underground home. The film is directed by Madeline Sharafian, a lead story artist at Pixar who worked as a storyboard artist on the Oscar-winning Coco, and as a story lead on Disney and Pixar’s Onward. Burrow was recently included on the short list for the Best Animated Short at the 2021 Academy Awards.

In Float, a father faces an unusual dilemma when he discovers that his son has remarkable ability that sets him apart from the norm. Bobby Alcid Rubio directs, having worked at Pixar as a story artist since 2007. Rubio began his career as a comic book artist, before working on several animated features including Pocahontas, Hercules, and Mulan.

With its tale of a talkative boy and a non-verbal autistic girl, Loop explores the different ways in which people experience the world. Directed by Erica Milsom, an award-winning documentary filmmaker known for her behind-the-scenes stories on Pixar films such as Ratatouille, Up and Inside Out, Milsom is also known for her independent films including festival favourite So Much Yellow.

Out, which has also been shortlisted for the 2021 Academy Awards, chronicles a big day in the life of Greg who, with the help of his excitable dog, tackles a personal challenge he has been avoiding for a long time. Director Stephen Clay Hunter builds on his experience as a Pixar animator and animation supervisor, with a long track record working on features ranging from A Bug’s Life and Finding Nemo through to Toy Story 4.

In Wind, a grandmother, and her grandson search for a way to escape the strange and endless chasm in which they live out their lives. The film is directed by Edwin Chang, who began his Pixar career in 2005 as a global technology intern. He has since gained expertise as a simulation artist and supervisor working on films including Up, Inside Out and Soul.

Launched in 2019, the SparkShorts program allows selected Pixar staff to develop their own animated short films, with limited creative oversight, on shortened production schedules. The program encourages artists to unlock their own creativity and explore new ideas, workflows, and storytelling techniques.

“The Pixar SparkShorts program has already proven itself to be an inspiring way to nurture talent,” commented conference director Dr. Maria Elena Gutierrez. “I am thrilled that these five talented directors will be joining us at our special VIEW Conference PreVIEW event to talk about their work and offer further inspiration to aspiring artists and professionals alike.”