Watch how Hinaleimoana Wong-Kalu, Dean Hamer, and Joe Wilson produced their beautifully animated short that celebrates the long-suppressed, centuries-old story of Waikiki’s mysterious four-boulder monument to the gentle people, both male and female in mind and body, who brought science and healing to the island. 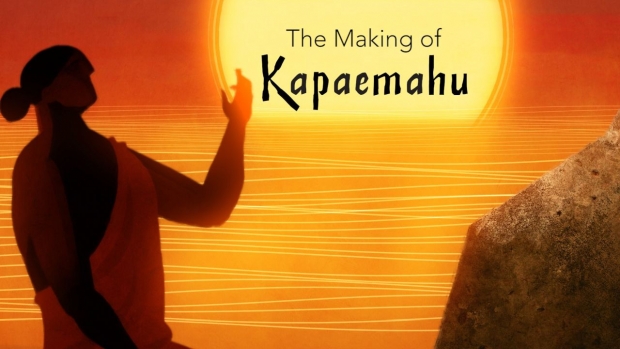 Hinaleimoana Wong-Kalu, Dean Hamer, and Joe Wilson, who wrote, directed, and produced the recently Oscar-shortlisted and beautifully animated short, Kapaemahu, have just shared with AWN a fantastic “Making Of” featurette that takes viewers behind-the-scenes of their film’s production.

The eight-minute 2D film tells a story you’ve never heard that is more meaningful today than ever before. Kapaemahu takes place in the 15th Century, as four tall, deep-voiced, gentle Mahu - individuals who are a mixture of both male and female in mind, body, and spirit -sail from Tahiti to Hawaii and introduce their gifts of science and healing to the inhabitants of Waikiki. The Mahu are in-turn gifted by the islanders with a monument of four boulders in their honor. After transferring their powers into the stones, the Mahu disappear. As time passes, foreigners inhabit the island and wars rage; the once sacred and revered stones, and their story, are forgotten, eventually buried under a bowling alley in 1941. Though the stones are recovered in the 1960s and placed back as a monument on Waikiki 37 years later, their true story was not fully recovered. But the power of the Mahu still calls out to those who pass by and are willing to listen.

Producing an authentic story that had literally been buried for centuries was not easy. According to Wilson, “Although Kapaemahu is a short film, it took a long time to make. Uncovering the true story from years of suppression, developing an art style rooted in Polynesia, writing a chant and script in a language that’s almost extinct - every step was meant to keep the film authentic to its roots while engaging to a wide audience.” Helping design and fully realize Kapaemahu’s lush and highly stylized look was the film’s animation director, Academy Award-nominated director Daniel Sousa, best known for his earthy and mythical shorts Fable (2006) and Feral (2012).

Spend a few minutes and enjoy the making of Kapaemahu, and then check out AWN’s intimate look at the film, Kapaemahu’ Helps Revive Hidden Hawaiian History of Healing and Aloha, where you can watch the short in its entirety:

Making Of Kapaemahu from Kanaka Pakipika on Vimeo.

Reflecting on the short’s powerful and important message, Wong-Kalu shares, “What we want people to take away from the film is that Hawaii is more than just an exotic background to film a movie. It’s a land rich with its own history, culture, and all manner of stories.”

“Kapaemahu is about teaching, it's about youth, and it's about the next generations,” she also notes about the film’s meaning in AWN's article about the short. “This entire story is a mirror of my journey as well and when I reflect now, looking at the final product, if there's anything that I want shown after I pass from this earth, at my funeral, it would be this animation.”