The Oscar-winning director and DreamWorks reveal they’re now in production on a new film, set in the ‘Trollhunters’ world, premiering next year on Netflix. 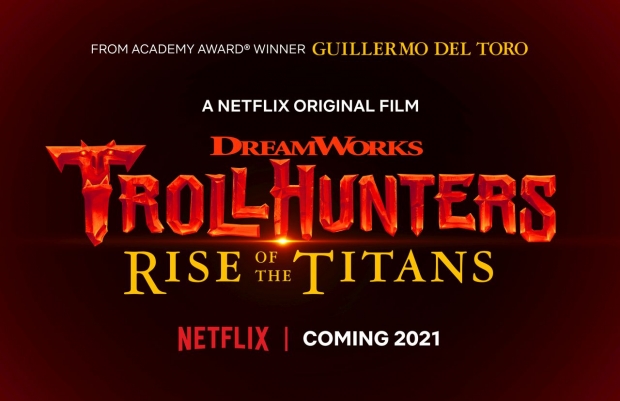 Guillermo del Toro and DreamWorks Animation continue to expand their Trollhunters world, and partnership, with a brand-new animated feature, Trollhunters: Rise of the Titans, coming to Netflix in 2021. The news arrives the same morning del Toro’s final Tales of Arcadia chapter, Wizards, premieres on the streaming giant.

Rise of the Titans, currently in production, is set in the Emmy Award-winning Tales of Arcadia world; Arcadia may look like an ordinary town, but it lies at the center of magical and mystical lines that makes it a nexus for many battles among otherworldly creatures including trolls, aliens and wizards. IN the film, heroes from the trilogy - Trollhunters, 3Below and Wizards - team-up in an epic adventure where they must fight the Arcane Order for control over the magic that binds them all.

Trollhunters... 3 Below... Wizards... the saga concludes in Trollhunters: Rise of the Titans, a Netflix original film coming 2021. pic.twitter.com/lomyDi74qw

According to del Toro, "Team Trollhunters committed, about a decade ago, to try and push the boundaries of 3D CGI animation made for TV.  We made decisions from the get-go regarding every asset and every audiovisual decision.  We outlined a vast trilogy of interconnecting mythology and characters that we always hoped could culminate with a massive ‘all-stars’ reunion.  Fortunately for us, DreamWorks Animation and Netflix both shared the very ambitious notion of doing the three series, interwoven and then finishing off with a bigger, epic-sized feature film to top it all off.   We wanted the feature to improve and expand but to also deliver more scope, more spectacle- more emotion too.  We are very proud of the Tales of Arcadia and extremely eager to deliver this spectacular finale for the audience."

The ambitious Tales of Arcadia trilogy, which began its Netflix run in December 2016 with the premiere of Trollhunters, has so far spanned an impressive 88 episodes, which includes the 10 new Wizards entries launched today. In the trilogy, audiences were introduced to the seemingly quiet town of Arcadia and an ordinary kid who embarks on an extraordinary adventure in a hidden world right beneath his feet. The first season lead the 2017 Creative Arts Daytime Emmys with six wins, more than any other program, including directing for an animated program (Rodrigo Blaas, Guillermo del Toro), writing (Marc Guggenheim), casting (Ania O’Hare, Mary Hildalgo) and a voice acting win for Kelsey Grammer. The second season received four nominations for the 2018 Creative Arts Daytime Emmy Awards, including Outstanding Children’s Animated Series, as well as a BAFTA nomination for International Animation. The third season was nominated for four 2019 Creative Arts Daytime Emmys including writing and directing.

The trilogy breakdown is as follows:

Set in the fictional suburb of Arcadia, our unlikely hero, Jim, and his two best friends make a startling discovery that beneath their hometown lies a hidden battle between good trolls and bad, the outcome of which will impact their lives forever.

After crash-landing in Arcadia, two royal teen aliens on the run struggle to blend in with humans as they evade intergalactic bounty hunters.

Wizard-in-training Douxie (Colin O’Donoghue) and the heroes of Arcadia embark on a time-bending adventure to medieval Camelot that leads to an apocalyptic battle for the control of magic that will determine the fate of these supernatural worlds that have now converged.