The battle for the fate of existence begins in the final chapter of the eight-time Emmy Award-winning ‘Tales of Arcadia’ trilogy, debuting August 7 on Netflix. 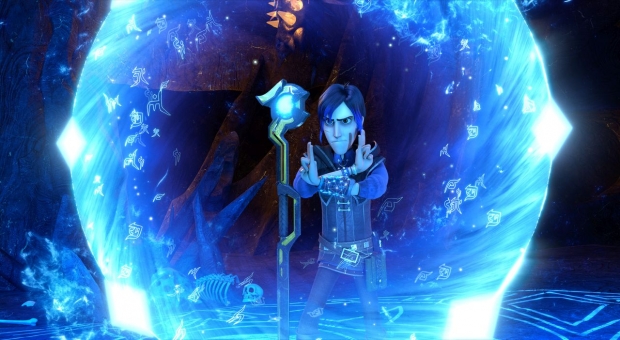 The dark menace is coming and the war for the fate of existence begins! Following Guillermo del Toro’s eight-time Emmy Award-winning Trollhunters and 3Below, DreamWorks Tales of Arcadia: Wizards marks the final chapter in the trilogy that brings together the three disparate worlds of trolls, aliens and wizards. In the newest installment, wizard-in-training Douxie (Colin O’Donoghue) and the heroes of Arcadia embark on a time-bending adventure to medieval Camelot that leads to an apocalyptic battle for the control of magic that will determine the fate of these supernatural worlds that have now converged. 10 new episodes of Wizards premiere August 7 on Netflix. Plus, this coming September 25 marks the launch date of DreamWorks Trollhunters Defenders of Arcadia, a brand new video game that takes place between the three distinct worlds of the Tales of Arcadia universe, and acts as a key narrative beat that unifies the trilogy. The game features an all-star voice cast that includes Emile Hirsch, Charlie Saxton, Lexi Medrano and David Bradley. DreamWorks Trollhunters Defenders of Arcadia will be available on Nintendo Switch, Playstation 4, Xbox One and PC Digital.