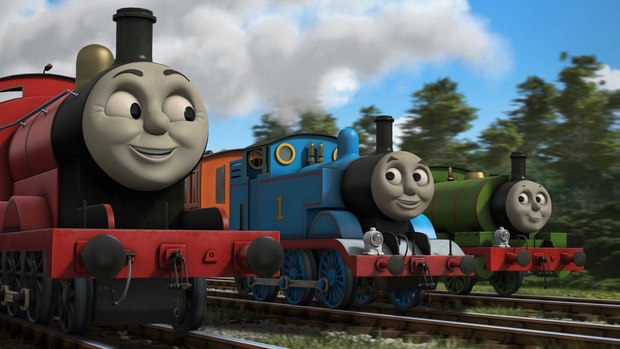 HIT Entertainment, one of the world’s leading children’s entertainment producers and a subsidiary of Mattel, Inc., has announced the latest CGI feature length Thomas & Friends special Sodor’s Legend of the Lost Treasure which is set for release on DVD this fall/autumn.

Under the direction of Executive Producer Christopher Keenan, 60-minute movie Sodor’s Legend of the Lost Treasure is a spectacular new adventure that takes Thomas to a new part of Sodor and on a curious quest that introduces a host of new characters; and the stellar voice cast bringing them to life. New engine Ryan will be voiced by Eddie Redmayne (The Theory of Everything, Les Misérables, Elizabeth I), while John Hurt (Harry Potter, Tinker Tailor Soldier Spy) will assume the part of Sailor John and Jamie Campbell Bower (Harry Potter, Twilight) will voice trusted sail boat Skiff.

Eddie Redmayne, who voices new tank engine Ryan, commented, “I grew up loving to watch Thomas and his pals getting caught up in unexpected and mischievous adventures. I jumped at the opportunity to get involved and what fun it was! I have never voiced an animated character before, and I had a complete blast.”

Actor John Hurt, who plays Sailor John, explained, "I remember watching Thomas the Tank Engine with my children when they were young and I'm delighted that it continues to appeal to each successive generation. I enjoy working vocally and have voiced many animated characters. Sailor John was something of a departure from what I usually do and a lot of fun to play as you can see from the pictures."

Voice of Skiff, Jamie Campbell Bower, added, “I’m thrilled to be a part of this project. I grew up with Thomas & Friends so it’s been really exciting to be able to get involved in this new feature special and voice the character of Skiff. It is a great show to be involved in and incredibly fun to record. I’ve thoroughly enjoyed my first animation and I look forward to everyone seeing the end result.”

It’s a big year for content and also for the brand as in 2015; Thomas & Friends celebrates 70 years of friendship with a year-long program of friendship-themed activity around the world.

Christopher Keenan, VP Global Content & Executive Producer, HIT Entertainment said “Sodor’s Legend of the Lost Treasure is an epic story of friendship, betrayal and, ultimately, loyalty where Thomas is at the centre of the action. We’re introducing a whole host of exciting new characters which is one of the great joys of writing for Thomas & Friends.

“We have introduced a wide variety of friends over the years and look forward to the audience’s reaction to these unique characters”.

Thomas & Friends special Sodor’s Legend of the Lost Treasure will roll out globally through 2015.