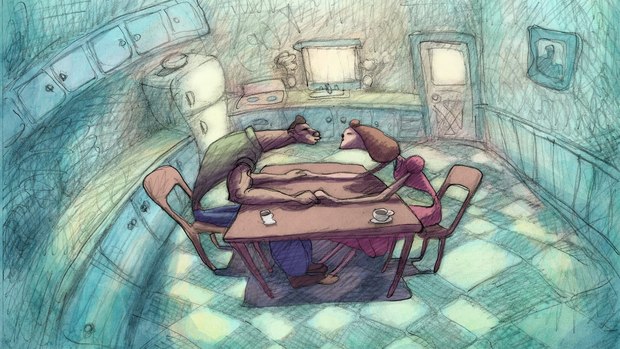 Cheatin’ follows Jake and Ella, who meet in a fateful bumper car collision, and become the most loving couple in the long history of Romance. But when a scheming “other” woman drives a wedge of jealousy into their perfect courtship, insecurity spells out an untimely fate. With only the help of a disgraced magician and his forbidden “soul machine,” Ella takes the form of Jake's numerous lovers, desperately fighting through malfunction and deceit as they try to reclaim their destiny.

Cheatin’ kicks off its New York theatrical run on Friday, April 3, followed by a national roll-out with stops in Chicago, San Francisco, Seattle, Minneapolis, Denver, Portland and other cities throughout the month. Plans for Los Angeles screenings are underway, with those dates to be announced soon, and the film will premiere on Vimeo and other digital formats on April 21.

Widely considered the King of Indie Animation, Plympton is the first person to hand draw an entire animated feature film. Bill moved to New York City in 1968, and began his career creating cartoons for publications such as New York Times, National Lampoon, Playboy and Screw.

In 1987, he was nominated for an Oscar for his animated short, Your Face. In 2005, Plympton received another Oscar nomination, this time for his short Guard Dog. Push Comes to Shove won the prestigious Cannes 1991 Palme d'Or; and in 2001, another short film, Eat, won the Grand Prize for Short Films in Cannes Critics’ Week.

After producing many shorts that appeared on MTV and Spike and Mike's, he turned his talent to feature films. Since 1991, he's made ten feature films. Seven of them, The Tune, Mondo Plympton, I Married a Strange Person, Mutant Aliens, Hair High, Idiots and Angels, and Cheatin’, are all animated features.

Bill Plympton has also collaborated with Madonna, Kanye West and Weird Al Yankovic in a number of music videos and book projects. In 2006, he received the Winsor McCay Lifetime Achievement Award from The Annie Awards.