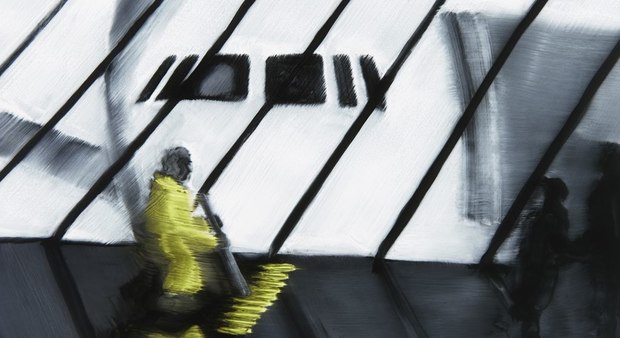 ‘Airport’ by Michaela Müller is one of 26 European animated short films being presented in the 4th Edition of the Animated Spirits Film Festival.

The Animated Spirits Film Festival, featuring a lineup of 26 diverse and engaging short animation films from Europe, including many U.S. premieres, kicks off this coming Sunday, November 4, with a series of free screenings, workshops and panels running through November 9. The program includes animated shorts from East Central European countries like Croatia, the Czech Republic, Estonia, Hungary, Latvia, Poland, Serbia, Slovakia, Slovenia, and Romania, with a special emphasis on women filmmakers from the region -- over 50% of the selections are directed by female filmmakers, bringing contemporary, timely and unconventional storytelling to the New York-based audience.  The festival this year has partnered with the SVA Computer Art, Computer Animation and Visual Effects department, which is hosting and helping to organize the week-long event.

Almost 30 years after the fall of the Iron Curtain, and the slow, often troubled process of democratization, animated short films are increasingly reflecting on social and political subjects with poignant contemporaneity. While artistic animated short films have a tendency in general to evoke the universal condition of human existence, the films to be showcased at the festival combine this with a strong incentive for dealing with both timely and evergreen issues of the actual world, such as the long-term effects of childhood traumas on one’s personality, or the gender differences and the matter of personal freedom in today’s society.

Selections include Wiola Sowa’s super-sensuous XOXO Hugs and Kisses, which earned her the Best Director Award at the Athens Film Festival; the Swiss Film Award winner Airport by Michaela Müller; and the ambitious opus, the utterly enigmatic Solar Walk by Reka Bucsi from Hungary, winner of the Audi Short Film Award at the Berlinale and the Grand Prize at the 2018 Ottawa International Animation Festival this September. Her graduation film Symphony no. 42 was shortlisted for the 87th Academy Awards and was screened at Animated Spirits in 2015.

Anna Ida Orosz, curator of the festival, noted, “In the carefully curated sampling of the program this year, the spotlight is taken by many strong female artists, whose films are probably the most striking from a visual and a thematic point of view and engage the viewers in the complex social issues of the female body and women’s role in today’s society.”

All programs are free and open to the public. RSVP required. Some of the films are suggested for those 18 and over.  Full program information and links to reserve tickets can be found here. Directing and Previsualization of Game Cinematics

Animated Spirits was founded and is organized by Zita Mara Vadasz, advisor at the Moholy-Nagy University of Art and Design, Budapest and former director of the Hungarian Cultural Center in New York. Since 2015, the festival has showcased 86 films from 21 countries in front of a 1500+ registered audience and has had 50+ partners from Europe and the United States.

“Animated Spirits Film Festival showcases the new, the exciting and the unconventional in European independent animation today,” Vadasz said. “The carefully selected films illustrate the spirit of contemporary experimentation, while reflecting on the potential of traditional and original techniques.”