Adobe renames Flash Professional CC to Adobe Animate CC, rewriting the tool from the ground up to add native support for HTML5 Canvas and WebGL as well as outputs to any format. 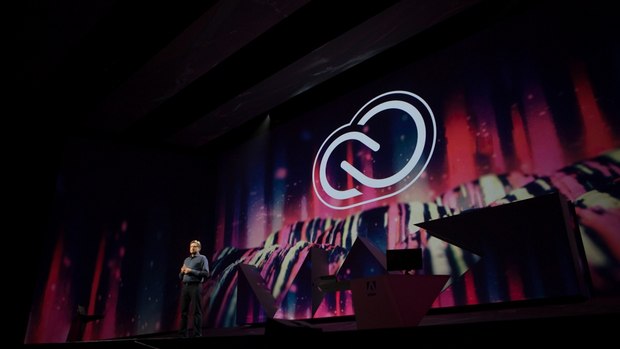 At MAX 2015 Adobe announced a slew of Creative Cloud news. The company unveiled loads of new desktop app features, including precise Dehaze in Lightroom CC, which has been available since MAX, expanded support for UltraHD in Premiere Pro, the new Shaper tool in Illustrator, and the ability to create realistic 3D models in the brand new Adobe Fuse CC (Preview) and easily import and work on them in Photoshop CC.

Adobe also made new free mobile apps available, such as Photoshop Fix and Capture CC, which let users edit images and design on the go, and automatically connect their work back to the desktop apps they use every day. And Adobe showed how all of this is connected with CreativeSync, which lets users start their creative work on any device and seamlessly pick it up on another. From initial idea to finished work, CreativeSync ensures that users files, photos, vector graphics, brushes, colors, settings, metadata, stock images from Adobe Stock and fonts and type from Typekit, instantly appear in their workflow right where they need them.

Today, the major updates to our Creative Cloud desktop apps are now available for the millions of Creative Cloud members worldwide. See below for more information on the top new features, and links to the teams’ blogs and product pages, which provide greater details about the individual apps. Additionally, you can watch features in action in the videos on Adobe’s What’s New page.

When users update Photoshop CC, Ilustrator CC, InDesign CC, Premiere Pro CC and After Effects CC, and launch the apps, they will see a new screen to help them get going with their work -- Adobe calls it Start. The Start experience puts users work front and center, with support for big previews so they can jump right back into their current projects quickly. The Start workspace loads instantly. Users can drag files in from the desktop and use all their favorite keyboard shortcuts in the workspace as well. Plus, there are templates to create new projects faster, and a simplified stream of helpful content.

Users can also join the Adobe channel on Twitch and @CreativeCloud on Periscope to see the Creative Cloud apps in action as some of the most impressive creatives do their work live. Click here for a full schedule of their live streams this week.

Now is also a great time to start using Adobe Stock. Users can now download and purchase video content, adding to its collection of photos and graphics with over 1 million HD video files and 45 million assets. What’s unique about Adobe Stock is that users can search for and browse assets directly from Creative Cloud Libraries, including new support for accessing stock within Dreamweaver CC (and coming to Muse CC and Animate CC in early 2016). Adobe Stock is already integrated into Photoshop CC, InDesign CC, Illustrator CC, Premiere Pro CC and After Effects CC (including Character Animator). Plus Adobe Stock is available for enterprise use, with additional support for license management, reporting tools, and unlimited usage in large print runs.

Web designers can now design and develop responsive websites for any browser or device with Dreamweaver CC. And with CreativeSync, integrate design elements and styles from other Creative Cloud apps, or high-quality images and graphics from Adobe Stock -- all directly within Dreamweaver. At Adobe MAX 2015 the company showed responsive design features in Muse CC as well, and these are coming in the Muse CC update in early 2016.

Photoshop CC users involved in UI, web or UX design can also check out the new Design Space (Preview), which is based on deep customer research and built for designers by designers to make thier many tasks faster and with less clicks. Also, now users can better customize Artboards. But perhaps the most requested feature for many years: users can now customize their Photoshop CC toolbar. Additionally, a new modern UI delivers a clean and consistent look and improvements in Creative Cloud Libraries.

Designers have even more to look forward to with updates in Illustrator CC & InDesign CC. The new Shaper Tool in Illustrator CC lets users draw with loose, natural gestures that magically transform into perfect geometric shapes. Additionally, there are new Live Shapes: Ellipses, Polygons and Lines, which are interactive and dynamically adjustable, so users can quickly craft vector shapes without having to apply effects or use other tools or panels. The latest release of InDesign CC helps users create and distribute layouts faster than ever, from designing in the intuitive Touch workspace to easily publishing documents online. With Publish Online (Preview) users can take their documents online. With a single click, the print layout is automatically converted to an online document that can be easily shared on Facebook and Twitter, in email, and more.

Adobe also made video and audio creation and editing a whole lot more interesting. The features and functionality the company previewed at IBC are now ready for download. Premiere Pro CC ushers in the new era of UltraHD via comprehensive native format support for editing beautiful 4K-to-8K footage, optical flow time remapping and advances color, with improvements to the Lumetri color panel and support for High Dynamic Range (HDR) workflows in Premiere Pro CC. After Effects CC now has the powerful and accessible color tools and color fidelity that Premiere Pro has. Audition CC introduces Remix, a new audio feature that automatically rearranges music to any duration while maintaining the aural integrity and structure of the piece. And Adobe Media Encoder adds Facebook to its Destination Publishing support, building upon existing support for YouTube and vimeo, to allow users to quickly and easily showcase their work to their social community.

Adobe is also renaming Flash Professional CC to “Adobe Animate CC.” Why the change? The use of open web standards and HTML5 has become the dominant standard on the web. Over the past few years, the Flash Professional CC product team has embraced this movement by rewriting the tool from the ground up, adding native support for HTML5 Canvas and WebGL as well as output to any format (such as SVG) with an extensible architecture. This flexibility has been a huge hit with Adobe customers. Today, over a third of all content produced in Flash Professional CC is HTML5-based, reaching over 1 billion devices worldwide. In order to more clearly reflect its role as the premier animation tool for the open web and beyond, Adobe updated the name.

In addition, Adobe Animate CC will continue to support Flash (SWF) and AIR formats as first-class citizens, as well as other formats like broadcast-quality video. We will continue improving Animate CC’s HTML5 capabilities over time, while optimizing its core animation and authoring feature set. For more details, watch Adobe’s Twitch Channel to see sneak peeks of what’s coming in Adobe Animate, and read the latest product team’s blog post.

Adobe Animate will be available in early 2016.