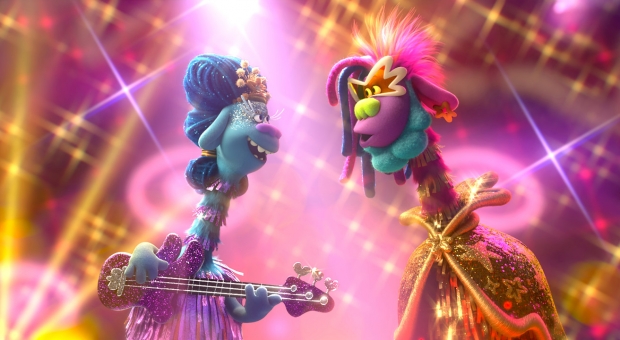 Available starting today through video on demand platforms, DreamWorks Animation’s Trolls World Tour is an energetic, whirlwind romp across six diverse lands of Trolls connected by music, color, and fiber. For Kendal Cronkhite Shaindlin, production designer on the studio’s 2016 hit, Trolls, returning for a sequel set in an even bigger world of psychedelic “fuzz” meant pushing the visual envelope even further. Once again, she was responsible for designing the look of the film, managing the art and character departments while communicating with the other departments to assure the visual quality and continuity of the film. She had a hand in every pixel on every frame of the movie.

And in Trolls World Tour, it feels like there’s an incredible number of pixels in every frame of the movie; think Carl Sagan’s “billions and billion!” And of course, as with all animated feature sequels, subsequent films give creatives a chance to push the visuals much much farther. “They let the beast out of the box with me on this one,” Cronkhite Shaindlin says. “I had such a great creative experience on the first movie, being allowed to really get deep into what I felt I could do creatively. Even though it seems we’re so advanced in CG animation, I still feel we're at the early stages. There's so much left to do, so much more to explore. We're just starting to tap into some great stuff. So, when I was allowed once again to design this sort of fiber-inspired world, that was really exciting.”

“For Trolls, the design came from the doll -- this stubby little character with lots of woolly, brightly colored hair,” the production designer states. “The shape language was right there. We don’t have a single straight, elegant line in the movie, just like the doll. It wasn’t just their hair, but the felted clothing the doll often came in. We were inspired by the era of the Good Luck Trolls dolls that was multicolored and textured. We ran with this idea.”

Regarding the new film’s extravagant celebration of all things multi-colored, textured, and fuzzy, Cronkhite Shaindlin recognizes dialing up the Troll-ishness wasn’t easy. “Rendering all that fuzz, I won't lie, was a huge challenge,” she laughs. “Thank goodness for our VFX supe [Matt Baer]. He really worked hard to get that figured out because on this film, there's a lot of fuzz… a lot. And it's better than the fuzz on the first film; much more refined. So that was a huge challenge, absolutely.”

A film’s production designer, especially in animation, provides the center point where visual design meets story; they balance the integration of narrative and design through laser focus on how every visual element does service to, rather than takes the place of, or distracts from, the story. The design and composition of every asset, character, environment and visual effect, along with the shape, color and lighting choice, flows through their hands.

When asked, Cronkhite Shaindlin notes several areas where she brings both skills and sensibility to the party. “First,” she shares, “you have to focus on visual storytelling -- the ability to really lock onto what your particular story is about. And making things fit into exactly what the story is or should be.” The second thing, for her, is the most exciting. “Risk,” she continues. “That’s what really excites me creatively. It's finding something that's never been done before and having faith that it can happen, then inspiring a crew to believe that too. That’s a big one.” Third, she continues, is working with great talent. “Finding the right team, that's key. Working with directors and producers, who are willing to let you go, that trust your creative vision for the show, and allow it to happen. And support it with the studio.” Lastly, and maybe most importantly, Cronkhite Shaindlin states, the production designer needs to understand what an audience finds enjoyable. “You need to know what’s visually appealing. You need to feel like you understand the work that's being done out in the world, and what’s going to attract people. And trust that you know and can communicate what that is.”

In a film as visually frenetic and fast-paced as Trolls World Tour, there’s a fine line between dazzling and overwhelming. What visual elements celebrate a musical culture without being insensitive or falling into stereotypes. “Well, I have a lot of eyes to help me,” she reveals. “Frankly, to be honest, initially I was actually worried about the film being visually overwhelming. I was worried it was going to exhaust people. But what I discovered, and I hope that the audience feels, is that there's a consistent shape language and fiber texture quality that ties things together visually in a compelling way that I didn't quite expect until I started to see it on screen.”

So, from a conceptual design standpoint, how did one tribe of Trolls become six? How did the filmmakers come up with five new musical lands? According to Cronkhite Shaindlin, “it was such an incredible challenge.” While the first film informed the sequel, it only featured a single Trolls world, known as the home of the Pop Trolls in the new film. “In the first movie, we established the Trolls basically as little forest sprites,” she describes. “They live in a forest, but a felt-inspired forest. In the new film, we felt like we had to combine those two things for each of the tribes. There had to be an organic environment that they lived in, different from the world of the original Trolls, now called Pop Trolls. And it had to have fiber grounded in that tribe’s musical culture. Those two elements combined created each new world.”

Let there be Rock Trolls!

“When I was researching the music and visuals around all these hard rock bands, certain things kept coming up,” Cronkhite Shaindlin says. “The occult kept coming up; the Illuminati kept coming up. And all the visuals were black and red. Everything was black and red. So, I thought, pyramids are big in the Illuminati. I thought of Branch’s rock; he lives in a kind of triangular subterranean home. Maybe Branch was originally a hard rocker and just never knew it. Maybe the rockers should live subterranean in the dark. But then I thought, a triangle, that's not quite right. What about a volcano? They could live in a volcano. It's slightly subterranean, slightly pyramid in shape, it’s red and black. So that was the natural environment we landed on.”

And then, of course, rockers like denim and leather and fishnets and a little leopard skin print. “I wanted Barb’s look to have a really raw, punk-rock edge,” she adds. “We drew inspiration from the variety of clothing fashions that were popularized by the rock scene. Her zipper belt and skull buckle have that punk DIY quality, while her shirt looks like it’s been shredded in a blender. There's zippers and studs everywhere. I also gave her a chopped mohawk and smeared eye makeup to channel the raw ‘rock ’n’ roll’ we saw in female-led rock bands. Those attributes visually establish Barb’s rebellion at being a Troll. That kind of mashup became their language. I’m still surprised they let us design a Troll with fishnets.”

These brightly colored Trolls live underwater in a crocheted digital fortress adorned with LED lights, originally inspired by nautical ropes. “Techno was one of the first ones we figured out,” Cronkhite Shaindlin says. “We decided it would be underwater and we’d have techno mermaids… Troll-maids. So, when I was thinking about the fiber, I was thinking a lot about knot making. Macramé and weaving are just a series of knot making. Knitting is too. What if there’s a coral reef made from rope and knotted twine? Then we incorporated stuff from techno shows, like the laser lighting; we wove fiber optics through the macramé reef, so things light up and glow, with a real black light quality. Voila, underwater dance club!”

The design team headed West for their Country Troll inspiration. “I thought a lot about the West, about the frontier, and quilts came up; the pain of a lot of Country songs was like the pain of surviving on the frontier, using everything you've got,” she explains. “And quilts are just so much a part of that culture. And when I look at landscapes, when I'm flying over farmland, it just looks like a patchwork quilt. For me, this was the first one we hit that just felt right. And using cacti was a perfect way to house the Trolls. The art department continued to riff on this with their own ideas, like characters pulling quilted trailers. And Tim was so incredible about pulling those ideas into characters. That’s how the Trolls became horses – well, centaurs, which was perfect.”

We Got the Funk… Trolls

According to the production designer, Funk was the was extremely challenging for a variety of reasons. “We had a consultant on Funk, because it was so challenging for us,” she admits. “But it's actually one of my favorites. Funk is a little different in that the tribe lives on a spaceship. That's inspired by George Clinton and Parliament. Of all the tribes, we wanted a little bit more of an urban feel for the Funk world. And so, we created this whole funky spaceship world, with a lot of 70s funk-inspired shape language -- lava lamp language -- and art from that period. The fibers are all shag, but there's also a lot of metallics, because we pulled in NASA technology as well.”

The world of Funk weaves together many style elements besides metallics, including sequins, tinsel, and a sort of black light neon lighting. “We have these colorful, furry characters like Cooper, and we began by dressing them in metallic helmets and costumes,” Cronkhite Shaindlin says. “Eventually, I said, ‘No, these characters should not be wearing metallic costumes, but be made of metal. It should be part of their DNA.’ That’s when we started using tinsel-like objects within their fur, sequins on their buildings, etc. If the Pop Trolls are felt and live in a felted forest, then the Funk Trolls should be metallic and live in a metallic world.”

If it Aint Baroque

Because the Classical Trolls were largely inspired by Baroque and Romantic periods, and classical music can often evoke a heavenly elevated feeling, the creative team looked for ways to combine textures, fashions and art of those eras into their designs. “We landed on this idea that they were up in the mountains above the clouds, almost like Machu Picchu,” Cronkhite Shaindlin notes. “And they had wings like little cherubs from some of those old classical paintings we felt really related. So, they live in caves inside rococo covered fabric mountains. And the mountains are organized like an orchestra, with the conductor in the middle, on top of a giant metronome mountain.”

In talking to AWN, the film’s director, Walt Dohrn, praised his production designer and her impact on the film. “She’s phenomenal,” he beams. “She is one of the most incredible production designers, who is always thinking about story as well.” For Cronkhite Shaindlin, diving headfirst into the Trolls world a second time was a difficult but ultimately rewarding experience. “It was both amazing, and a huge challenge,” she concludes. “But honestly everybody on the crew was so excited to work on this film. It was really a joy; a true labor of love.”

Choc Chip Animation Riffs on Pop Culture in ‘The Art of Murder’
F is for Flake: The (Not So) Great Animation Robbery?
Re-VIEW: ‘Avatar: The Way of Water’ – A Miraculous Vision
‘Kung Fu Panda: The Dragon Knight’ Celebrates a Special Lunar New Year
END_OF_DOCUMENT_TOKEN_TO_BE_REPLACED