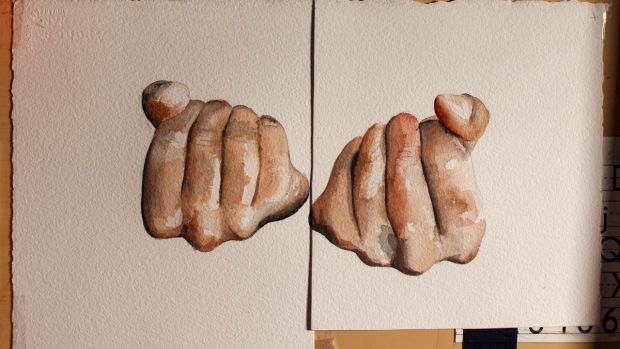 In our newest Fresh Takes, AWN is pleased to share Coup d’état Math, Sai Selvarajan’s animated short that last month took home a Special Jury Recognition: Texas Short award at the SXSW festival. The film depicts four immigrant stories: a fight to be born, a fight to survive, a fight to find your place, and the fight to maintain. In collaboration with fine artists Amanda Selvarajan and Olivia Saldivar, Selvarajan applied distinct visual language to each narrative and journey, for a unique and emotionally gripping viewing experience.

In awarding the film, the festival noted, “Coup d’état Math is an inventive and complex film about the struggles of the refugee community. The social realism captured in the film’s animation adds an element of vulnerability and rawness to the storyline. Sai’s intentional and thoughtful approach is illustrated in every detail of the film. It presents a rich visual tapestry of mixed media combining animation and live-action with gripping stories of pathos and human resilience.”

For Selvarajan, the film was born shortly after the Trump administration announced their notorious travel ban. “It started with the Trump administration’s ‘Muslim Ban,’” he shares. “That was the catalyst for me to get up and make something in response.  There was a clear line in the sand at that point, and there was also a clear misunderstanding of immigrants and what they go through. I am an immigrant - the first story in the film is my origin story - so the rhetoric and actions by this administration hit me personally and hard.” In the face of increasing demonization of immigrants, not just in the US, but in countless countries around the world, Selvarajan knew it was a pivotal moment to tell his and other immigrants’ stories.

“The stories had been percolating in my mind for a while,” the director continues. “The first one is based on my birth.  The second two came from discussions I’d had with my cousins, who had experienced refugee camps and door-to-door looting.  For the last story, I wanted it to take place in America to show that the immigrants' journey is infinite.  A lot of times we think their journey is over once they get here, but there’s often a contradiction of expectation and reality, dreams and circumstance.”

Just as each immigrants' story is unique, so too is each narrative, and visual style. According to the director, “I started a folder on Google drive of references and styles I wanted to explore on my own.  I made mood boards for all four stories, which I then turned into storyboards.  Then, I reached out to fine artists I’d always wanted to work with; I also asked my wife, Amada Selvarajan, a brilliant watercolorist, if she wanted to participate. She and I worked together previously on my short film, Sugarless Tea, and I knew I wanted her artistic imprint on this film, too.”

Longtime friend Olivia Saldivar was brought on to create illustrations and wood cuts; in all, Selvarajan’s team was small: two fine artists, a composer and himself. With the help of his colleagues at Dallas-based Lucky Post, where he is an editor, Selvarajan united the four narratives into one, including audio with voices from different cultures that provide both distinctiveness and commonalities. All told, from script to completion, the film took three years to produce. Creatively, Selvarajan drew inspiration from many sources, such as a lot of “older stuff” like The Man Who Planted Trees and “collages of Vernon Fisher.” Bauhaus was another major influence. “You see a lot of Bauhaus aesthetic creep into infographic pieces,” he says. “You’ll see some of that in the first story.  The second story is all time-lapse watercolor.  But even there, I wanted it to be stylized.  You’ll see some of that in the closeup of the hands; the rest of the world goes away and it’s just about the two fists and the open palm.  We started the watercolor series with a very detailed painting of an actual refugee camp and then as the story unfolds the paintings, get more stylized.”

Selvarajan dipped back into infographics for the third piece. “I wanted to keep it simple and kind of live in a confined space just like the trophy case, and then just keep adding stuff to it,” he notes. “The last story has line drawings and woodcuts,” he states.  “I wanted to take static graphics and give them delicate movement.  I knew it would be told in Spanish with English subtitles, so the animation couldn’t be too distracting.  I’ve always loved Olivia’s portraits -- they convey an untold life that’s seen their share of ups and downs.  I’ve always wanted to give them their own stories.”

Sharing a common filmmaker lament, Selvarajan reveals his biggest challenge on the film was time. “I’m an editor [at Lucky Post] and worked on the film in between projects. I wrote the script and was prepared to direct and edit, but this being an indie project, I also ended up serving as the producer - many hats to wear. That said, the collaborating artists were incredibly generous, and we found creative ways to push things forward in precious ‘spare time.’ I learned a lot about their process and how to direct the animation while still giving them creative freedom to interpret the stories visually.” The director describes that regarding the film’s score, if you listen closely, you’ll hear nuanced notes that play off the narration and animation. “With Joey [Kendall], my composer, I didn’t give him reference music and say, ‘Do something like this.’ What Joey is really good at is reading the script, looking at a rough cut, and then coming up with a score that fits the mood, the feel. To me, that’s the magic of music. I think anyone can listen to a track and then kind of ape it.  But to read letters off a page, or see a really rough assemble, and then go off and make something that complements the piece, that takes an incredible talent.  If you listen to the score under each story, they’re each vastly different, but still share a common thread.”

Ultimately, Coup d’état Math demonstrates that the immigrant experience is not singular; it is connected by a fundamental desire to live without fear or persecution, to rise from poverty, and find a sense of belonging. “I hope audiences come away with a knowledge of what it is like to be an immigrant, what they have to go through, and how the journey never ends,” Selvarajan concludes. “The experience of leaving the country they were born in and forging a life in a new country is one for the ages.  Our family has done it three times.  We left Sri-Lanka, for Nigeria, for England, and then finally Texas. I hope people feel empathy and compassion for people leaving their homes behind for new ones. That’s the heart of the film.”

You can find more information about Sai Selvarajan on social media: