Season 5 of ‘DreamWorks Trolls: The Beat Goes On!’ launches exclusively on Netflix on January 18. 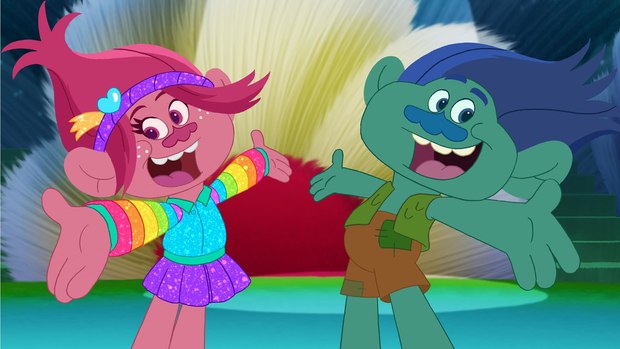 Season 5 of DreamWorks Trolls: The Beat Goes On! launches on Netflix later this month with all-new hair-raising adventures featuring Poppy, Branch and all of Troll Village. To get the party started, we have two new clips from the upcoming season to share!

Picking up where the hit CG-animated DreamWorks Animation movie Trolls left off, the 2D-animated DreamWorks Trolls: The Beat Goes On! features original songs, including compositions by acclaimed songwriter and producer Alana Da Fonseca (the Pitch Perfect films, Alvin and the Chipmunks) as well as the voice talents of Amanda Leighton, Skylar Astin, Ron Funches, Gary Cole and David Koechner.

In Season 5 of Trolls: The Beat Goes On!, Queen Poppy decides to create a new Bergen-free Troll anthem, Branch must overcome his fear of birds, Guy Diamond loses his glitter, and all of Troll Village comes together to celebrate the one day it snows with an epic Snow Day. Also, who is Mr. Glittercakes?!

When Guy Diamond loses his glitter, Poppy and Smidge take him on a treacherous journey to find the fountain of glitter. But is this boundless glitter oasis too good to be true?

When things seem impossible, leave it to Poppy to find a bright side!

Join in on exciting new adventures as the adorable, happy Trolls party like never before in all new-episodes available exclusively on Netflix starting January 18.