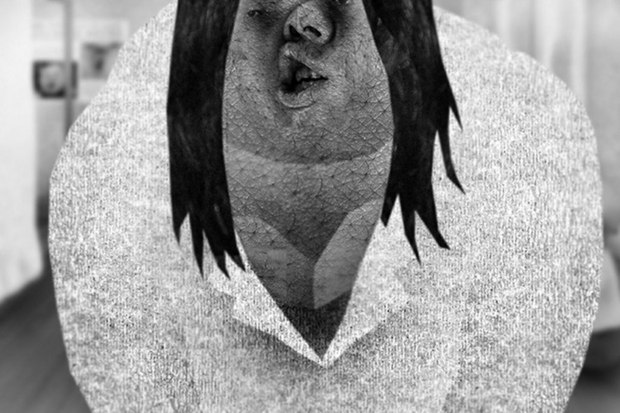 Overwhelming.  There’s not space enough to be anywhere.

Even worse, I’m in a place where I don’t where I am.

I find a hotel.

I look out and am scared shitless by the sudden appearance of a skeletal figure on the other side. His hands and face are barely visible. I float through the window and discover a young man. Together we look out the window.

Everything is beginning to thaw.

A dead dog lies in the moist snow.

I watch as the boy pulls strands of hair from his head.

Bored with that he grabs a goldfish from its bowl. The fish struggles to breath. I move closer and jump inside the darkness of the fish’s mouth.

Dinner time. Cut into the food. Blood and crap seeps out. As the adults eat their faces darken. Horrified the boy and I flee to the bedroom.

We stare out the window. I look at the boy. His face darkens and soon the entire room explodes into a silent blackness.

A man looks sad and anxious.

A doctor arrives, places xrays on the lightboard. Nothing is spoken, everything is said.

The man stares at the floor and scratches his knee.

I look at the spot on the xray and jump through it.

In a room I see a woman. Mother? Ugly scrunched up faces peer in the window. What’s so fascinating? The woman tends to my bruised knee.

A headless fat woman sits in a cubicle. A needle enters her skin. Bruises appear all over her body.

A curtain rises. Two boys play a boy and dog.  The dog pees. The boys collapses to the ground. The audience laughs as a stretcher comes to take the boy away.

The boy returns to a doctor’s office. It’s the same scene as earlier.

A voice: “When I was a child, I often imagined such scenes and cried a lot : my mother killed herself by leaping from a window or was becoming weak from heavy illness. (of course, these things happened just in my imagination.) When I was in my teen, I started to fear about my own death. And recently thinking about death of people around me started to scare me again.”

That’s all I remember. I woke up sobbing, full of melancholia. I get up, piss, and make some bad hotel room coffee.

What was that dream all about? It was so sad and weird and mundane, yet beautiful.

All the people in the dream were like ghosts. They seemed real and animated at the same time as though trapped between life and death.

I suddenly remember the last thing that mysterious voice said before I woke up:

“I feel as if I am not myself when my fear about death is getting bigger (it often happens when I try to sleep in my bed). Of course it is a illusion but it is a really weird feeling as if I am glancing Kei Oyama very very far from him and perceive him as a complete stranger. That unsettledness that these characters in your dream have is really like this strange feeling.”

What’s strange too is that the characters, while always aware of their mortality, continue on, not racing to do monumental things. Instead, they just live the life they always did. Maybe it’s a message to stop trying to live so big and to accept the everyday, that there is life and meaning in lying on the floor and reading a magazine, a simple dance, a good fuck or smoke. Moments that might be irrelevant to others, but that are individual moments, our moments. Look at the dying guy. He remembered a bruised knee and a school play. They seem trivial to me, but they are clearly everything to him.

Too often we overlook and under appreciate the usual.

Parts of this text originally appeared in the book Japanese Animation: Time out of Mind (2010)

Choc Chip Animation Riffs on Pop Culture in ‘The Art of Murder’
F is for Flake: The (Not So) Great Animation Robbery?
Re-VIEW: ‘Avatar: The Way of Water’ – A Miraculous Vision
‘Kung Fu Panda: The Dragon Knight’ Celebrates a Special Lunar New Year
END_OF_DOCUMENT_TOKEN_TO_BE_REPLACED