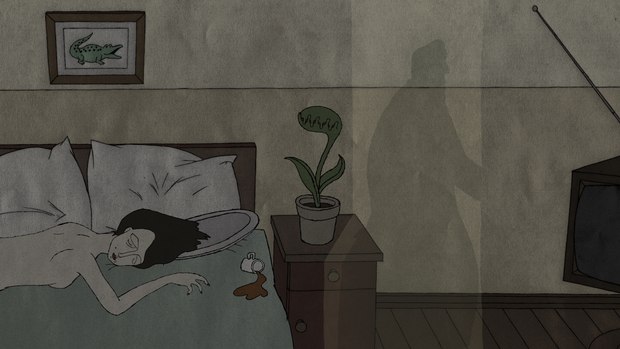 Much like the work of, say, Finnish director, Aki Kaurismaki, there is an understated sadness to the absurdist, comic soap operas of Estonian animator, composer, set designer, Kaspar Jancis (who is currently finishing up the stop-motion feature film, Morton on the Ship of Fools). Throughout his body of work (e.g. Weitzenberg Street, Piano, Marathon), we meet an array of misguided and lonely people who crave, yet fear – and ultimately, hilariously mangle - genuine, intimate attachments.

In Jancis’ most acclaimed film to date, the Cartoon d’or winning, Crocodile (2009), a one time international Opera star (whose many awards include Music’s Stanley Cup and the Elvis Award) turned boozy, crocodile-costumed ice cream truck promoter meanders through a daily routine of despair and humiliation. Things begin to look up when he meets a mysterious woman – who wears only a raincoat and makes a daily jaunt to the nearby meat market to flash men in exchange for meet that she feeds to the crocodile she keeps in the bathtub of her flat.

The intimate joy the troubled souls find together quickly unravels when the man learns about the crocodile in her bathtub and leaves her.

Crocodile is, ultimately, a sad, frustrating - and all to common - story about people who can’t recognize a good thing when they have it and continually let fear and the baggage of the past dictate and control their present and future.

Then again, perhaps all we really have are these spurts and splatters of joy. Perhaps the best we can do is to recognize and and savour them when they pass by.

Mission Critical: ‘Lightyear’s Journey to Infinity and Beyond
Putting the Fun in Dysfunction: The Non-Humanistic Therapy of ‘HouseBroken’
‘The Freak Brothers’: This is Your Humor on Drugs
The Heroic Logistics of ‘Superman & Lois’ VFX
‘Eureka!’: An Inventive Imagination Runs Wild in a Prehistoric Paradise
Bill Fagerbakke Talks Nickelodeon’s ‘The Patrick Star Show’
Re-VIEW: ‘Love, Death + Robots’ – A Visceral Pleasure
END_OF_DOCUMENT_TOKEN_TO_BE_REPLACED